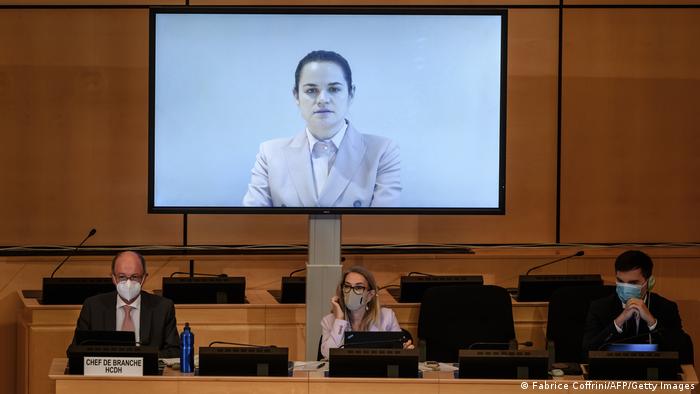 The council voted 23 to 2 — with 22 abstentions — that UN Belarus monitor Anais Marin should be allowed entry to the former Soviet country and given free access including to prisons.

The resolution also calls on Minsk to stop using violence, torture and arrests to quash civil rights, and urges authorities to start a dialogue with the opposition and civil society.

The ruling took place hours after Belarusian opposition leader Sviatlana Tsikhanouskaya spoke by video link to the council in Geneva, demanding an international mission to document the "atrocities" committed during the crackdown on anti-government protesters.

Tsikhanouskaya also called on Lukashenko to hold another election.

The Belarusian strongman insists he won 80% of the vote in a disputed presidential poll on August 9 that sparked more than five weeks of protests and brought hundreds of thousands of people onto the streets.

Insisting that she was ready to talk, Tsikhanouskaya said it was vital that the police violence against her supporters be independently chronicled.

"The scope and the brutality of the extensive force used by the regime is in clear violation of all international norms and the Universal Declaration of Human Rights, adopted by the United Nations," the opposition leader told diplomats from Lithuania, where she is in exile.

During Friday's session, envoys from Belarus, Russia, Venezuela and China raised a long series of points of order to prevent UN officials from giving testimony about the often brutal police response.

Marin, herself, told the council that more than 10,000 people had been "abusively arrested" and hundreds of cases of torture were reported to the world body, including rape, electrocution and other forms of physical and psychological torture.

In an interview with DW shortly after her appearance, Marin said the unrest in Belarus now has the potential to escalate in such a way that it destabilizes international peace and security.

"We cannot deny the reality of the crimes committed. We have seen them all, there were videos and photos. These testimonies are about very serious crimes, so we cannot pretend that they didn't happen or that it's a only a domestic affair," she said.

Lukashenko has blamed the United States and its allies for fomenting the weeks of unrest, and on Thursday threatened to shut the borders with Lithuania, Latvia, Poland and Ukraine, warning of a possible "war."

Minsk has turned to longtime ally Russia for support and the two countries on Friday said that their special forces had rehearsed a counter-terrorism scenario involving some 800 soldiers.

On Thursday, 17 members of the Organization for Security and Cooperation in Europe (OSCE) appointed an independent team of experts to investigate alleged rights violations during Belarus' election.

However, Minsk is unlikely to give the OSCE mission access. The group's observers were not invited for the election and Belarusian officials have ignored repeated offers by the OSCE chairman, Albanian Prime Minister Edi Rama, to visit.

"I hope that the authorities in Minsk will not waste this chance," Rama told DW on Friday. "It would be, in my view, a strategic mistake to refuse the offer the OSCE is making.

Rama said time is not on Minsk's side and that the human rights situation in the country was "deteriorating."

Seventeen members of the OSCE have agreed to assign an independent team of investigators to probe election rigging and human rights abuses in Belarus stemming from August's ballot. They may not be able to go to Belarus.