Demonstrations against the embattled regime of Alexander Lukashenko have continued in Minsk despite ongoing repression. Protesters were kettled and attacked by masked men not wearing insignias. 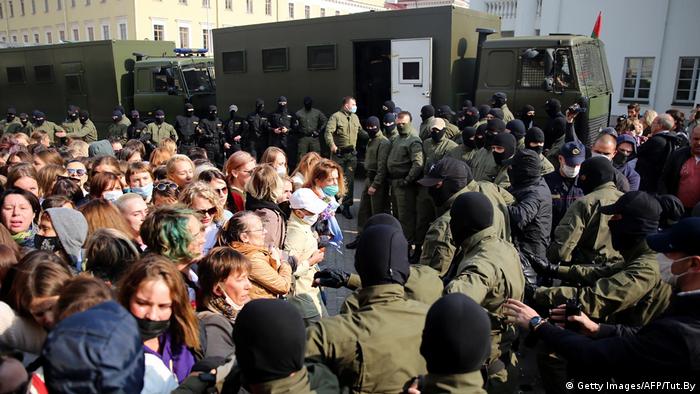 Belarusian riot police on Saturday violently detained several dozen women demonstrators, as President Alexander Lukashenko's regime continued to resort to violence against its own people to cling to power.

Clashes broke out in Minsk's Freedom Square as men in black facemasks and green uniforms without insignia shoved and kettled the women protesters, as was visible in footage broadcast by Belsat TV channel and Tut.by, a Belarusian independent outlet.

Some protesters pushed back and tried to unmask the uniformed men.

Unprecedented demonstrations have erupted in recent weeks after the president defeated opposition candidate Sviatlana Tsikhanouskaya and won re-election with 80% of the vote on August 9.

Tsikhanouskaya's supporters dispute the result, and the candidate is currently in exile in Lithuania.

Lukashenko told to 'Go away!'

Reuters reported that many of the 5,000 protesters present on Saturday chanted "Go away!" in reference to Lukashenko, and "Masha" — a common alternative for Maria — in support of opposition activist, Maria Kolesnikova.

The 38-year-old is one of several of Lukashenko's opponents who have been jailed or detained in recent weeks.

Kolesnikova was detained after she resisted forced expulsion from the country by ripping up her passport.

On Saturday, Kolesnikova was moved to a new location northeast of the Belarusian capital. The opposition wrote on Twitter that they had not been told the reason for the move.

Kolesnikova is a close ally of Tsikhanouskaya and the pair are members of the 7-person Coordination Council, which was set up to demand new elections in the ex-Soviet nation of 9.5 million people.

Svetlana Alexievich also called journalists to her home, and accused the government in Minsk of terrorizing the people. The author said that despite official pressure, she wouldn't leave the country.