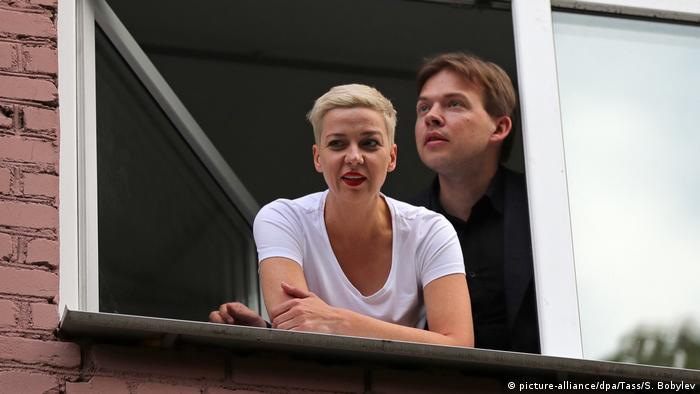 Belarusian opposition leaders Maxim Znak and Maria Kolesnikova are being held in custody under suspicion of destabilizing the country and harming national security, Belarus' investigative committee said Wednesday, adding the arrests were part of an ongoing "national security" probe.

Belarusian lawyer Znak was taken from his office by masked men in plain clothes earlier Wednesday, the opposition Coordination Council said. Znak is a member of the Council board and a prominent critic of President Alexander Lukashenko.

The Council said Wednesday it could not reach Znak by phone, but that he texted the word "masks" to colleagues.

Znak was one of the few prominent opposition candidates in Belarus who has not yet been detained by authorities. .

His detention comes after Maria Kolesnikova, one of the most prominent opposition figures still in Belarus, was detained near the Belarus-Ukraine border Monday after she resisted a forced deportation by tearing up her passport and jumping out of a car.

Kolesnikova's lawyer said Wednesday that she is now being detained under criminal charges of "suspicion of making calls to seize power," Russian news agency RIA reported.

They are 'snatching the best of us'

On Wednesday, 72-year-old Alexievich told reporters that unidentified men in plainclothes were seeking to intimidate her by gathering outside her apartment building.

Referring to reports of Znak's detention, Alexievich said security services were "snatching the best of us."

"What is happening is terror against the people," she said

Who is the opposition in Belarus?

The Coordination Council set up by opposition candidate Sviatlana Tsikhanouskaya who ran against Lukashenko in the August 9 presidential election.

Znak was a lawyer for Viktor Barbariko, who intended to stand against Lukashenko in the August elections before he was imprisoned in June.

Tsikhanouskaya called on Russia to "support the Belarusian people" in a video message on Wednesday, describing Russia as leading a "propaganda campaign" against the protest movement.

Hours later, Lukashenko announced he would visit Russia next week.

Protesters have disputed the official election results that saw Lukashenko claim a sixth term in office with 80% of the vote. Hundreds of thousands of people have taken to the streets over the last month, with tens of thousands protesting against the president once again on Sunday.

Authorities arrested more than 600 people over the weekend. Rights groups have widely reported hundreds of counts of torture. Police said they detained a further 121 people at protests on Tuesday.

Belarusian opposition figures Maria Kolesnikova and Maxim Znak have been handed long prison terms by a Minsk court. Reactions from Germany and the EU have been unequivocal.