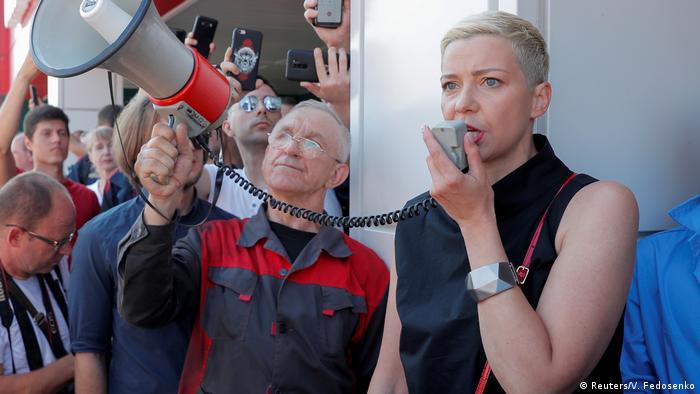 Unidentified men in black wearing masks have reportedly grabbed Belarusian opposition figure Maria Kolesnikova off the street on Monday, driving her away in a minibus.

Kolesnikova is a campaign partner of opposition candidate Sviatlana Tsikhanouskaya, who claimed victory against President Alexander Lukashenko in the August 9 presidential election. Protesters have disputed the election results, with tens of thousands marching against the president since the vote. Kolesnikova is a vocal critic of Lukashenko and has played a vital role during the weeks of demonstrations.

Witnesses say Kolesnikova was seized in central Minsk and bundled into a bus labelled "Communications." Her phone was also apparently switched off.

The Coordination Council said Kolesnikova had been "kidnapped by unknown people in central Minsk," along with a spokesman and executive secretary.

"Their whereabouts are unknown," it said, accusing Lukashenko's regime of "openly using methods of terror."

The Coordination Council has demanded the immediate release of the detainees and the return of other activists who were pressured into leaving Belarus.

Local journalist Hanna Liubakova wrote on Twitter that her Coordination Council colleague Anton Radniankou could also not be reached.

Kolesnikova announced the creation of a new opposition party, Together, last week. Some of her fellow anti-Lukashenko activists have condemned the move, calling it a distraction.

In a statement, Sviatlana Tsikhanouskaya, Lukashenko's main rival, said the kidnappings were an attempt to interfere with the work of the Coordination Council.

"The more they try to scare us, the more people will take to the streets," Tsikhanouskaya said in a statement.

Tsikhanouskaya, who fled Belarus for Lithuania a day after the election, said the alleged kidnapping was an attempt to undermine the opposition.

She added "what the government is doing is terrorism," according to Interfax.

Lithuanian Foreign Minister Linas Linkevicius likened what happened to the actions of Soviet-era secret police, calling it "a disgrace" on Twitter.

Another leading activist, Olga Kovalkova, arrived in Poland on Saturday. She said she had been told she would face arrest if she stayed in Belarus.

More than 600 people were arrested over the weekend during protests, according to police. The demonstrators were accused of taking part in illegal mass gatherings.

At least 100,000 people took part in weekend demonstrations in the capital.

European Commission spokesman Peter Stano said the EU's executive branch was looking into Kolesnikova's abduction and denounced the Belarusian authorities' actions as "unacceptable." Stano said the EU wanted to impose sanctions "very soon" after coming up with a list of individuals responsible for rigged elections and police violence against demonstrators.

The European Commission expressed concern about "unexplained and arbitrary arrests" in Belarus on Monday, while Germany has also condemned the widespread arrests. The weekend clampdown was one of the most intense since protests began.