More than two dozen people have been detained by masked security forces in Minsk, according to an independent media report. Protests have taken place since last month's contested election win for Alexander Lukashenko. 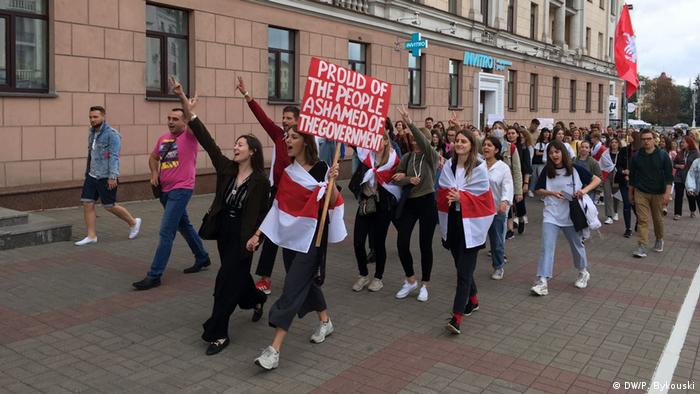 Masked security agents took several students off the streets of the Belarusian capital, Minsk, and packed them into vans as new anti-presidential protests took place, an independent Belarusian news site reported on Saturday.

Tut.by tweeted a video showing masked security taking people away on Friday night. Some appeared to be in security attire, others in casual exercise clothing. The tweet reads "Independence Avenue right now. People are being detained."

Students were draped in red-and-white opposition flags and protested in several places around Minsk, including the Minsk State Linguistic Institute where police arrested as many as 40 people on Friday, according to local media.

Belarusian human rights group Viasna said many of those taken into custody had been demonstrating
peacefully and had been brutalized while being detained.

Viasna said about 5,000 women took part in a separate march, which police followed. No arrests were reported.

LGBT+ rights supporters appeared in the demonstrations for the first time, waving rainbow flags in the women's march. Although LGBT activities have been legal in the country since 1994, stigmatization is strong.

Protests have taken place in the country since President Alexander Lukashenko won a sixth term in office following a disputed election on August 9. Protesters and international observers have called the polls, which saw Lukashenko win 80% of the vote, unreliable.

Lukashenko lambasted protesters on Saturday, saying they were spreading the coronavirus.

"Where's the social distancing and so on in that? We're doing everything we can to delay the moment when we say goodbye to this disease. That is unacceptable," said Lukashenko at a televised government meeting.

German Foreign Minister Heiko Maas warned Lukashenko there would be further sanctions against the Eastern European country if crackdowns on protests continued.

"We as the European Union do not recognize the election and have decided on sanctions. We are going to implement them now. If Lukashenko does not react, there will be further sanctions," Maas told German newspaper Bild am Sonntag.

"I demand that Lukashenko negotiate with the opposition, that the election be repeated, that Lukashenko immediately stops imprisoning and mistreating peaceful demonstrators, that he respects human rights and the freedom of the press," said Maas.

The senior figure in the opposition Coordination Council was previously sentenced to 10 days in jail on August 25.

"Representatives of the militia and the interior ministry of Belarus came to me and said that if I did not agree to leave, I would face long arrests…it was said that there would be more (arrests) to infinity," she told a news conference in Warsaw.

Kovalkova is a confidante of opposition leader Sviatlana Tsikhanouskaya, who is in exile in Lithuania.

Under threat from authorities, Belarusians go into exile

What do a DJ from Minsk, a worker from Grodno and a businessman from Brest have in common? Three Belarusians who felt compelled to leave the country after being threatened by the authorities shared their stories with DW.