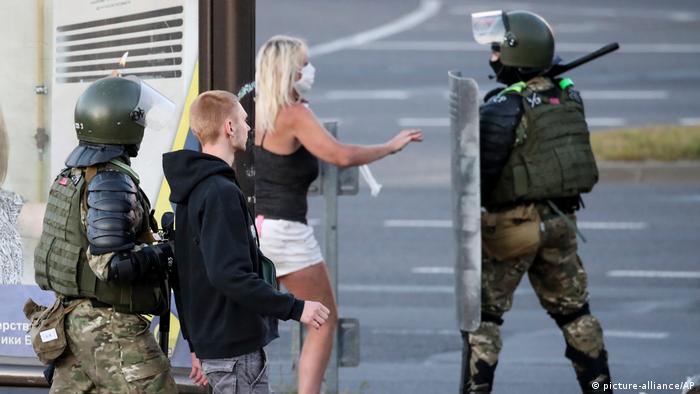 European Union foreign ministers are to meet on Friday to discuss the situation in Belarus, the bloc's top diplomat, Josep Borrell, announced on Wednesday.

Long-time Belarusian ruler Alexander Lukashenko has been reelected as president amid cries of foul play from the opposition.

Speaking to DW, Lithuanian Foreign Minister Linas Linkevicius said he hoped all options will be on the table at Friday's meeting, including sanctions.

"I can just hope that he [Lukashenko] cares," Linkevicius said. "He cannot stay in this world of illusions, thinking that he has a mandate to act like he has acted in the three nights since the elections and this violence in the streets must stop."

Confirming her invitation, Swedish Foreign Minister Ann Linde told Swedish radio that the issue of possible sanctions against Belarus would be one of the topics discussed.

"I absolutely think we need to consider broadening targeted sanctions against those responsible for the violence against the protesters (and) for the election fraud — those involved in the electoral process not having turned out free and fair," Linde said.

The announcement of the extraordinary meeting comes as Belarus saw a third night of protests against Lukashenko's sixth term.

The Belarusian Interior Ministry said on Wednesday that more than 1,000 protesters had been arrested, with 51 demonstrators and 14 police officers hurt overnight. Police said they had used firearms in one southern city. At least one protester has been killed since the protests broke out on Monday.

Lukashenko won the election with 80% of the vote, according to preliminary results cited by the Central Election Commission.

The opposition has claimed that the elections were rigged, and Tsikhanouskaya has since fled to Lithuania, saying it was for the sake of her children.

"We're trying to help those who are exposed to danger and trying to be active, trying to accumulate, to consolidate the European position, talking to the colleagues in the region, preparing for this council meeting," Lithuanian Foreign Minister Linas Linkevicius told DW.

Friday's meeting is also to discuss tensions in the eastern Mediterranean amid Turkey's quest for resources in contested territorial waters, and developments in Lebanon as the country falls further into political chaos after last Tuesday's devastating blast in the capital, Beirut.