Protesters flood the streets of Minsk despite brutal arrests

Tens of thousands of people rallied in the Belarusian capital, Minsk, on Sunday despite warnings of a heavy-handed response by authorities.

By late afternoon, independent Belarusian media outlet Tut.by reported that at least 100,000 people had gathered outside the Independence Palace, on Victors Avenue, where some clashes broke out with police.

Dozens of people were arrested, with the Viasna rights group putting the figure at 175 in Minsk and 250 across the country.

The Interior Ministry later confirmed to Russia's Interfax news agency that "not less than 100" protesters had been detained.

Video footage showed police hitting some protesters with batons before carrying them away in unmarked vehicles.

DW's Nick Connolly, reporting from the scene, said many of the arrests took place toward the end of the protest.

"In the last 10 to 15 minutes, I've seen young people trying to disappear into the crowds, running from police in plainclothes, wearing balaclavas, who were driving unmarked vans with no number plates," he said.

Connolly added that attempts to clamp down on the protest movement and the use of propaganda — including a recent image of Lukashenko holding a Kalashnikov — seem to have had the opposite effect.

"People are laughing at the regime rather than fearing it and coming out in ever greater numbers," he said. "People don't give the impression of being scared or being willing to stay sitting at home while Lukashenko regains control of this country." 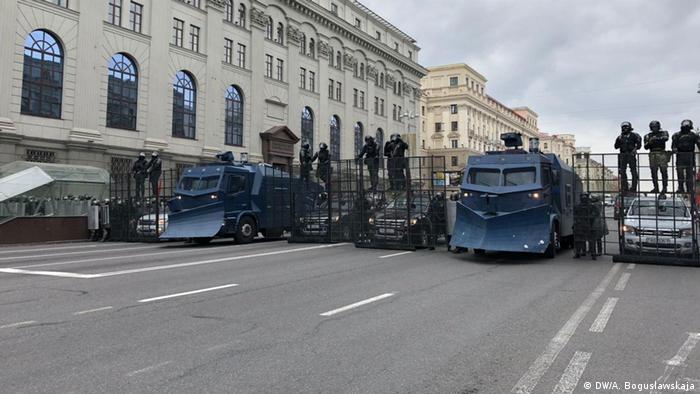 Heavy vehicles were seen rolling through Minsk since the early morning. Security forces, some heavily armed, took up positions and surrounding the centrally located Independence Square.

The Interior Ministry had earlier warned: "We turn to the citizens and guests of our country! Do not take part in the non-sanctioned mass events. This is against the law! The police will take necessary actions to prevent such actions being carried out and will not allow violations of public order."

However, opposition leader Sviatlana Tsikhanouskaya called on her fellow Belarusians not to be intimidated.

"Remember, together we are strong," she said in a video message from Lithuania, where she fled
to after losing to Lukashenko in the elections.

Women in Belarus march against Lukashenko

Local media reported widespread problems with mobile internet in Minsk, with one of the largest mobile operators of the country, A1, announcing that restrictions were put in place on the order of "authorized state bodies."

Video shared by Tut.by showed protesters in the city of Grodno hit with what appeared to be tear gas, followed by scuffles with police.

Several thousand people were reportedly protesting in the western city.

Similar protests were seen in other cities such as Brest, Mogilev, Gomel and Vitebsk.

Maria Kolesnikova, a leader of the Coordination Council set up by the opposition to try to convince Lukashenko to resign, said the sea of people "cannot be stopped by military equipment, water cannons, propaganda and arrests."

"Most Belarusians want a peaceful change of power and we will not get tired of demanding this," she told The Associated Press.

She spoke to other reporters later, saying: "Despite rain and pressure from the authorities, despite repression, many more people turned up in Minsk than last Sunday."

"I am convinced that protests will continue until we win."

Lukashenko claims to have won the August 9 elections with an 80% margin after ruling the former Soviet country for 26 years.

His disputed victory has brought thousands of people onto the streets for weeks, demanding his resignation, despite a massive police crackdown.

Thousands of people have been arrested, with accusations of beatings and torture.

Journalists, including foreign media, have been caught up in the crackdown with frequent arbitrary arrests and harassment.

Belarus opposition leader Sviatlana Tsikhanouskaya says embattled President Alexander Lukashenko must go, because protesters "will not step away." Speaking to DW, she also praised the support she's received from the EU.

DW Editor-in-Chief Kasper-Claridge said the arrest of DW correspondent Alexandra Boguslavskaya last night was "yet another assault on press freedom in Belarus."

Protesters flood the streets of Minsk despite brutal arrests