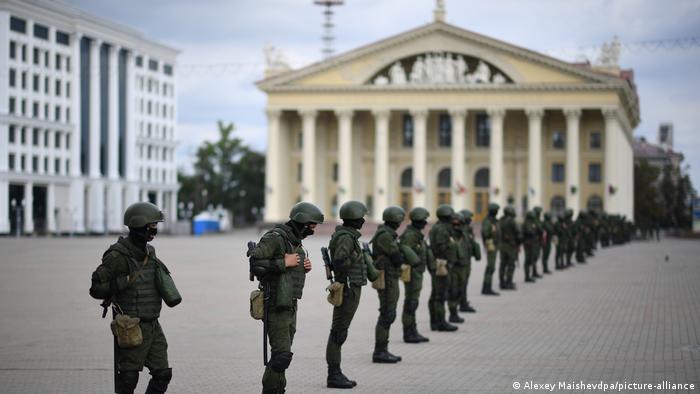 Embattled Belarussian President Alexander Lukashenko on Thursday said troops would be pulled from the street to guard its borders with EU countries.

Polish officials said the situation had not yet changed at the border.

"We take this as another element of the propaganda campaign, a psychological game which aims to create a sense of an external threat," Polish Deputy Foreign Minister Pawel Jablonski told Reuters news agency.

Lithuanian border authorities also confirmed that the situation at the border with Belarus remained normal, saying they are waiting to see how the changes are implemented.

Since Lukashenko declared victory in a contentious presidential election last month, the former Soviet republic has seen thousands of protesters rally against his 26-year rule.

"Our people will not step away, they woke up and they want a new Belarus," former presidential candidate and opposition leader Svetlana Tikhanovskaya told DW last month. "The person who has to step down is Mr. Lukashenko."

Belarusian authorities have responded by cracking down on anti-government protesters and targeting opposition figures, including the leading opposition group, the Coordination Council, which has accused Lukashenko's regime of "openly using methods of terror.

On Friday, nearly 30 countries issued a joint statement calling on Belarusian authorities to end internet blackouts, a tactic often used by repressive governments to stop the opposition from organizing.

"Shutdowns and blocking or filtering of services unjustifiably limit the rights of peaceful assembly and freedoms of association and expression, especially when they lack procedural fairness and transparency," said the statement.

Meanwhile, 17 members of the Organization for Security and Cooperation in Europe (OSCE) launched an investigation into rights violations in the wake of the contested August election, saying: "The mission is about holding the Belarussian authorities accountable."