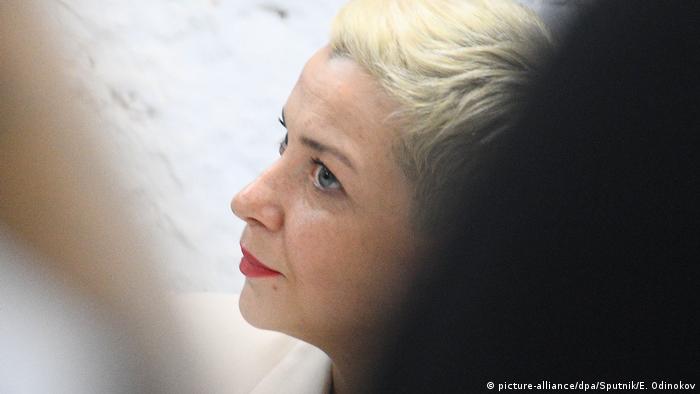 Leading Belarus opposition figure Maria Kolesnikova said security officers put a bag over her head and threatened to kill her when they tried to forcibly deport her to Ukraine this week, according to a statement filed by her lawyer.

Kolesnikova said she had genuinely feared for her life. "In particular it was stated that if I did not voluntarily leave the Republic of Belarus, I would be taken out anyway, alive or in bits. There were also threats to imprison me for up to 25 years," she said.

Kolesnikova prevented the attempt to expel her by tearing up her passport, and is now in detention in the capital, Minsk. She is due for questioning on Thursday.

Additionally, she plans to take legal action against Belarusian authorities. She has demanded that the country's investigative committee initiate a criminal probe against the KGB security police and GUBOPiK, Belarus' internal affairs ministry. Her request, addressed to the chairman of the committee, Ivan Noskevich, was handed over by lawyer Lyudmilla Kazak.

In her statement, the opposition leader outlined the sequence of events on September 7 and 8, including her abduction by masked men, psychological pressure, death threats and attempts to deport her.

"During my illegal detention … using every opportunity, I told the passing officers that I had been kidnapped, and demanded to inform my lawyer and my father about my whereabouts.

"After the KGB officers realized that I would not voluntarily leave Belarus, they put a bag over my head, pushed me into a minibus and took me to the Belarusian-Ukrainian border, where they tried to expel me against my will from the Republic of Belarus," she said.

"After I tore my passport, thus stopping my entry into Ukraine, I was again put into a minibus and taken to the Mozyr border facility, where I stayed until the evening of September 8. Thus, the above-listed officials of the GUBOPiK and the KGB of the Republic of Belarus committed a number of criminal offenses against me."

Hundreds of thousands of protesters have taken to the streets since the presidential election on August 9. According to official results, incumbent President Alexander Lukashenko won by a landslide. Demonstrators have claimed the vote was rigged, and demanded Lukashenko step down.

Lukashenko has cracked down on protesters and refused to talk with the opposition. On Thursday, he reiterated that he will not resign.

"I want to tell you like a man... People often reproach me: 'He won't give up power.' They're right to reproach me. The people didn't elect me for this," said Lukashenko as he inaugurated a new chief prosecutor. "Power is not given to be taken, thrown and given away."

Cops quit in Belarus: 'That's not why we entered the force'

While anti-regime protests have been brutally dispersed in Belarus, several security officials have also doffed their uniforms. DW spoke with some of them — and they gave clear reasons for why they've left the force.