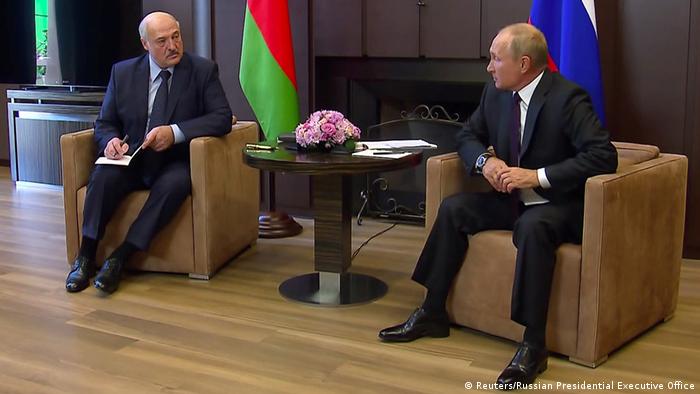 The Kremlin reaffirmed its backing of President Alexander Lukashenko as the leaders of Russia and Belarus met in Russian resort of Sochi on Monday.

Russia's Vladimir Putin said Moscow will grant a loan worth $1.5 billion (€1.26 billion) to the neighboring state. He also backed Lukashenko's initiative to reform the Belarusian constitution, which Lukashenko has launched while facing a large-scale protest movement.

"I am sure that, considering your political experience, the work in this direction would be organized on the highest possible level," Putin told Lukashenko at the joint press conference.

The opposition movement says Lukashenko rigged the August vote, which he claims to have won fairly with more than 80 percent of ballots cast.

Moscow will also continue pre-planned joint military drills, according to Putin. The first of these drills was due to start on Monday. At the same time, Putin emphasized that Russian soldiers would "return to their permanent deployment locations" after the drill ends.

Lukashenko noted that disagreements between Moscow and Minsk can involve any issue except security.

"We will not ask anybody if we are going to do the drills or not," said the Belarusian leader. "We have done them and will do them."

Commenting to the NATO troops deployed near Russia's borders, Lukashenko called not to repeat the mistakes of World War II.

He said that NATO "does not take us into account, they don't mind our concerns, they do the drills when they want."

"So we as well… will be preparing our armies to be able to — God forbid — resist that," he said.

The Monday meeting can be seen as a key signal of Russia's support for Lukashenko after two leaders engaged in a public spat during the election campaign Belarus. Lukashenko claimed Russian mercenaries had been deployed to Minsk to destabilize the situation in the country, with Moscow denying responsibility.

Ahead of the Sochi meeting, there was speculation that President Putin will seek closer ties with Belarus in exchange for continued support.

The Russian president said at the end of August that the country's military would intervene if protests turn violent. The country already benefits from cut-price Russian gas. Moscow also provides subsidies and cheaper loans.

In addition, Russia has offered to restructure Belarusian debt and support the banking system.

On Sunday, at least 100,000 demonstrators marched through Minsk, with separate protests taking place in other cities. More than 700 people were arrested, according to the Reuters news agency.

The 66-year-old Lukashenko has been in power for 26 years. He accuses the opposition of being backed by the West and anti-Russian.

The cost of receiving more backing from the Kremlin could be Lukashenko's acceptance of even greater Russian dominance.

Moscow has long pushed for closer integration, including a joint currency. Lukashenko has resisted some of those measures and has had a difficult personal relationship with Putin.

Demonstrations against the embattled regime of Alexander Lukashenko have continued in Minsk despite ongoing repression. Protesters were kettled and attacked by masked men not wearing insignias.