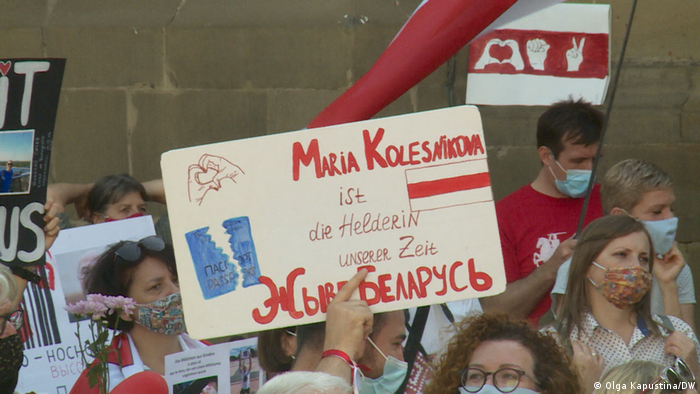 Kolesnikova once lived in Stuttgart. There, Schädler and Kolesnikova set up InterAKT, an initiative that promotes experimental art. The two last crossed paths in February, when they attended Stuttgart's ECLAT festival. Kolesnikova then returned to Minsk, where she heads the city's OK16 culture center. Despite living in Stuttgart for over a decade, Kolesnikova regularly returned to Belarus to stage art projects.

Kolesnikova's Stuttgart friends and colleagues closely follow the events unfolding in Belarus. "It is so odd to feel such a strong connection, despite being so far away," says Schädler. She says she is proud of her friend, and that "she and other women in Belarus are showing the world how to stage a peaceful revolution." That is why they want to do whatever is in their power to get Kolesnikova out of jail. Kolesnikova making her trademark hand symbol for the heart, underlining the call for a peaceful change

Initially, Kolesnikova had joined the team of Viktor Babriko, a former banker who planned to contest the Belarus presidential elections in August. But, when he was barred from running and detained on suspicion of financial crimes, Kolesnikova teamed up with Sviatlana Tsikhanouskaya and Veronika Zepkalo. The trio campaigned together all across Belarus. Kolesnikova'sheart-shaped hand gesture later became one of the protest movement's most iconic symbols.

After the Belarus elections, Zepkalo and Tsikhanouskaya were forced into exile. Kolesnikova, meanwhile, refused to leave the country. On September 7, she was seized by plainclothes agents in Minsk and driven to the Ukrainian border. Friends who accompanied her that day say  Kolesnikova had been offered a train ticket to Munich, which she evidently turned down. She tore up her passport and insisted on staying in Belarus. Now, the opposition figure has been remanded in custody in the city of Zhodino under charges of "posing a threat to national security." She could face up to five years behind bars.

"We shared a statement on social media on the day of she was kidnapped," says Schädler. "Pretty quickly, this snowballed into an initiative joined by many artists across Germany." She says they then penned a letter to German Chancellor Angela Merkel, asking her to call for the release Kolesnikova and other prisoners. Together, they also launched an online petition addressed to Belarus strongman Lukashenko. It has been signed by more than 36,000 people. 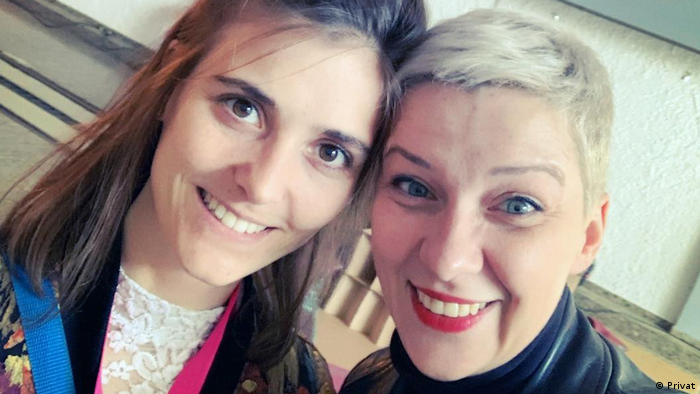 Another friend, Natasha Lopez, knows Maria Kolesnikova - or Mascha as friends call her - from when they were students. They are both members of the Vis-à-vis vocal trio, along with Hugo Rannou. Lopez says her friend Mascha is "funny, strong, and full of life." She knows that Mascha is a fighter. Back in 2019, the pair staged an improvised performance titled "No voice — No Body" dedicated to the themes of power and liberty.

"The choreographer asked us about situations in which our liberty was curtailed, and Mascha talked about her experience in Belarus," Lopez recalls. The performance entailed Kolesnikova playing a flute, and actors around her trying to take it from her. Behind her, scenes from previous Belarus protests and crackdowns were projected onto a screen. This was followed by excerpts from her protest speech, in which she is heard saying: "There is no such thing as pure liberty. The decision to be free requires taking responsibility for yourself. Being free is harder than simply accepting what exists."

A minute of laughter

Composer Sergej Newskij was one of about 250 individuals who joined a Stuttgart solidarity rally in support of Kolesnikova on September 13. He says it is only logical that she has become a dedicated dissident. "In a dictatorship, you cannot create a bit of new music, software or a properly functioning business without eventually running into resistance; people come to realize they have rights." 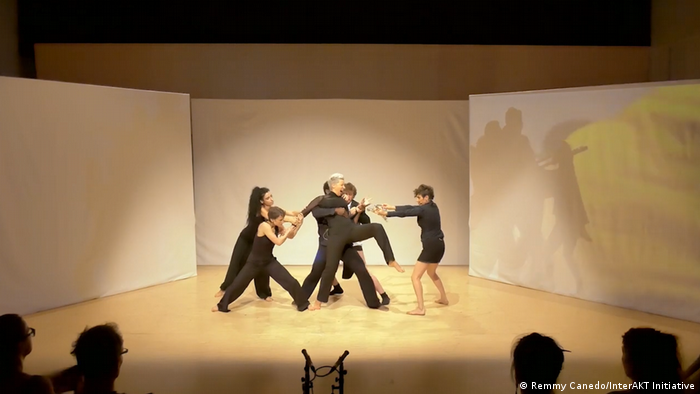 Maria Kolesnikova in a performance titled "No Voice, No Body"

Hugo Rannou, the third member of Vis-à-vis, joined the September 13 protest as well. He says Kolesnikova's key trademark is her infectious laughter. At the rally, he told fellow protesters that "we want to take the same approach as Maria when facing danger and violence: optimism and laughter." Rannou then asked everyone to join in with, not a minute of silence, but a minute of laughter to express their solidarity with Kolesnikova. "Laughing is liberating and kills fear," he told the crowd and began chuckling into his microphone. Many joined in. This was followed by collective cries of "Long live Belarus!" and "Free Mascha!"

"Get lost, Lukashenko" — that is what it's come down to after a month of protests in Belarus following the contested election. But the demonstrators don't know what to do next, Vladimir Dorokhov writes.