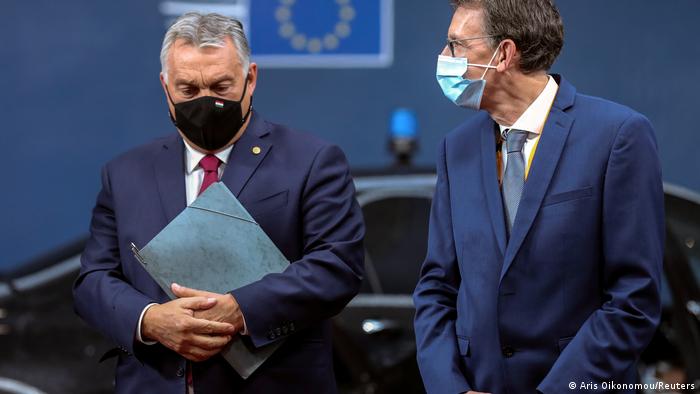 Foreign affairs are taking center stage as European Union leaders gather in Brussels on Thursday and Friday for a two-day summit.

The meeting was initially scheduled for last week but was delayed when European Council President Charles Michel entered quarantine because of contact with a person infected with COVID-19. He has since tested negative for the virus.

A host of foreign policy issues are on the agenda:

The EU's tricky ties with Turkey will likely dominate the first night of the summit. Ankara is currently embroiled in a dangerous maritime standoff with EU members Greece and Cyprus, raising tensions in the eastern Mediterranean and fears of a full-blown conflict.

Cypriot President Nicos Anastasiades on Thursday accused Turkey of "gunboat diplomacy" and violating its maritime shelf in a search for hydrocarbons. "What I expect from the European Council summit is a more concrete and effective stance, to end this gunboat diplomacy," he said ahead of the EU gathering.

France and Austria have backed Greece and Cyprus, but it's still unclear whether there's unanimity in the bloc on imposing harsher sanctions against Turkey.

"Our objective is to create a space for a constructive dialogue with Turkey to achieve stability and security in the whole region, and to ensure full respect for the sovereignty and sovereign rights of all EU member states," Michel told leaders in an open letter ahead of the meeting.

He also warned that "all options remain on the table" if Ankara does not engage constructively in talks.

The EU has been under pressure to act since the eruption of mass anti-government protests in Belarus following what's widely seen as a fraudulent presidential election. But Brussels has so far been unable to act due to Cyprus' objection.

Cypriot officials cite an August agreement among EU foreign ministers to approve Turkish sanctions and Belarus sanctions together, arguing that both are of equal importance.

"It is bad that we cannot make it work,'' Dutch Prime Minister Mark Rutte said Thursday ahead of the summit. "It is of major importance we agree on Belarus sanctions. There is wide-ranging agreement on that. A link between Belarus and Turkey is political only, and has no explanation when we assess the facts,''

EU officials have drawn up a list of 40 Belarus officials seen as responsible for post-election repression in the country, and they will face sanctions if Cyprus drops its roadblock.

The issue is more likely to be resolved at the next EU foreign ministers meeting. But foreign policy chief Josep Borrell said that leaders could provide political guidance at the summit.

The leaders will also discuss whether to include Belarus' leader Alexander Lukashenko on the sanctions list, as Canada and Britain have already done.

The recent flare-up of fighting between Armenia and Azerbaijan over the disputed Nagorno-Karabakh region will also be on the agenda and affect the discussions over Turkey.

Macron is scheduled to report on the situation to the EU leaders. He told reporters on his way into Thursday's talks that he was sure Syrian "jihadist" fighters were operating in Nagorno-Karabakh.

"We have information today that indicates with certainty that Syrian fighters from jihadist groups have transited through Gaziantep to reach the theatre of operations in Nagorno-Karabakh. This is a very serious new fact, which changes the situation," Macron said

The leaders are also expected to hold a strategic discussion on how to deal with China in light of growing concerns over Beijing's human rights record.

EU leaders are to take stock of the slow progress between the two sides toward a major investment deal.

The gathering will also witness a discussion on Brexit. The EU leaders will be updated on the state of play in the ongoing talks with the UK on a post-Brexit trade deal.