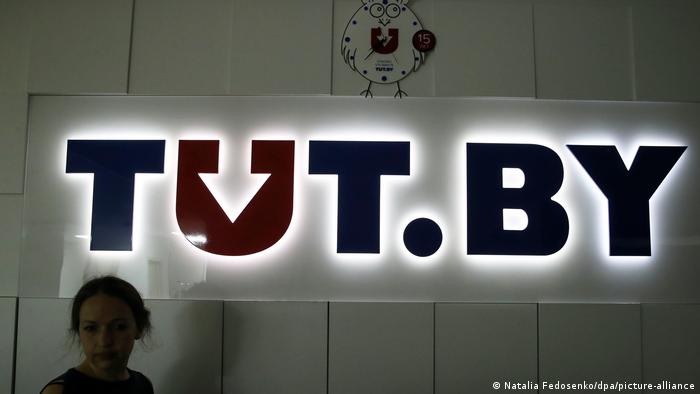 Belarus' popular independent online news outlet Tut.by will have its media credentials suspended from Thursday for the next three months, following an announcement made earlier this week.

The temporary ban is set to last until December 30.

The outlet has been covering the mass protests against President Alexander Lukashenko, following his controversial reelection on August 9.

In a bid to suppress protests, Belarusian authorities have targeted the media, detaining journalists alongside opposition leaders and demonstrators. They have also stripped foreign journalists of accreditation.

Announcing its decision on Tuesday, the Ministry of Information cited a court ruling that found the site had published prohibited information. It did not specify what information this was.

Tut.by said in a statement that it intended to continue operating "without the status of a media outlet.''

Without the accreditation, the site will lose advantages, such as reporting from areas of military conflicts or emergency situations, at mass events and at other events of public importance.

Tut.by only registered as a media outlet in January 2019. Before this it had operated without media credentials since the site's founding in 2000.

The outlet plans to contest the decision in court next week.

DW's Nick Connolly, who has been reporting on the mass protests from Belarusian capital Minsk, has been hit by the government's refusal to renew foreign journalists' media accreditation.

"Every time I tried to renew it [the accreditation] I was told 'unfortunately the commission in charge can't meet because of COVID-19 – not a convincing argument in a country where the president said 'go to a sauna if you have COVID.'"

"That's an excuse that's being pedaled, not just to us, but all the international media." He said it was "the plan" that in a few weeks' time there would be no foreign journalists left in the country to report on the protests.

Local journalists were also in danger, added Connolly. He cited an incident at a recent woman's march in Belarus where a journalist was handed 15 days imprisonment, despite identifying herself as  a journalist and having correct accreditation.