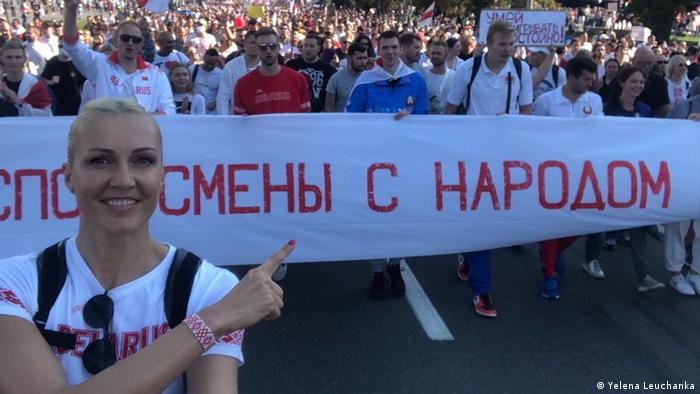 Update: Since publication of this article, Yelena Leuchanka was detained at Minsk airport on September 30, while trying to leave the country to receive planned medical treatment and rehabilitation. Leuchanka received a 15-day prison sentence for violating an administrative code regarding the organization and holding of mass events. The Free Union of Athletes called for a nationwide boycott of all sporting events in protest.

Yelena Leuchanka describes it as the moment she knew there was no going back.

In the days immediately after President Alexander Lukashenko's disputed election victory, she watched in horror as her fellow citizens were dragged away and beaten up by the Belarusian security services. Leuchanka, one of the country's best-known basketball players, realized she could no longer stay silent.

"If you cut yourself, and it's not healing and you continue to press on the cut, eventually it's going to start bleeding," Leuchanka, pictured above, told DW. "We're past the point of coming back from this. We're in the 21st century, we're in Europe, how is this possible? There's no human rights here. We can't peacefully protest."

Mass demonstrations against Lukashenko's 26-year rule have continued since the August election. In a report last week, international rights group Human Rights Watch accused the police of arbitrarily detaining protesters and subjecting "hundreds to torture and other ill-treatment." Some of that number has included athletes.

At the latest big protest on Sunday, Leuchanka saw for herself just how brutal the police can be.

"The guy was taken by a couple of people that surrounded him, and this one guy comes from his back and out of nowhere just hits him in the stomach, where the person is already being held, so he can't even protect himself," she said. "I don't understand why there's so much hurt and so much hate towards your own people."

Marching under a banner of the Free Union of Athletes, a newly-created movement of Belarusian sportspeople, Leuchanka says she feels she has a duty to use her voice and stand up for others in the country.

"My fellow athletes, we're in this for the first time," said Leuchanka, who has represented Belarus at two Olympics. "We're trying to be as supportive as possible for our people, because I know when they see us out there together with them, it's giving them hope, it's giving them this feeling that they're not alone."

Leuchanka is one of nearly 600 Belarusian sports figures who have signed an open letter demanding, among other things, new elections and an end to police violence. The numbers involved continue to grow. Fearing reprisals, the signatories say "all athletes will act together, up to and including a possible refusal to play for the national team," if their actions are punished.

But that already appears to be happening. Alexander Opeikin, a Belarusian handball official who initiated the letter, says he knows of 30 instances where sportspeople have lost money or their jobs because of their political stance.

"We have a very big conflict with the sports ministry," Opeikin told DW. "All athletes are now under pressure."

The Belarusian sports ministry didn't respond to a request for comment on the letter, nor on the accusations that people were being removed from their positions on sports teams. 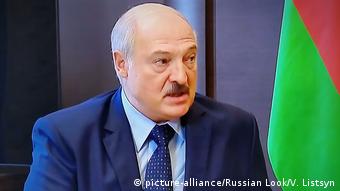 With most sports in Belarus directly tied to the state, athletes are dependent on the government for their income. And although Opeikin has helped set up a foundation to provide financial support to any athlete affected by the protests, many high-profile sports figures are yet to put their names to the letter.

Big-name Belarusians urged to use voice

Stars in Belarus, such as tennis player Victoria Azarenka and multiple Olympic biathlon champion Darya Domracheva, have largely remained silent. At this month's US Open, Azarenka called the situation "heartbreaking" but wouldn't be drawn further on the subject. In an Instagram post, Domracheva appealed only for the police violence to stop.

Leuchanka says she doesn't understand what is holding the big-name athletes back. She is urging them to speak out.

"I respect them as athletes and what they have done for our country," she said. "But our sport is only popular when you have people who cheer for you, and this is the only reason why any sport is alive, because of fans, because of the people. Now it's time we become fans for our people. The really big names, those are the athletes who people look up to. Their voices matter. Their voices can make a change."

Lukashenko, himself a keen sportsman, has used the success of Belarusian athletes to burnish his own image. Last year, in a coup for Belarus, the country hosted the multi-sport European Games, welcoming 4,000 athletes from across the continent. Thomas Bach, the president of the International Olympic Committee (IOC), congratulated Lukashenko on the "excellent organization" and "good atmosphere" of the Games. 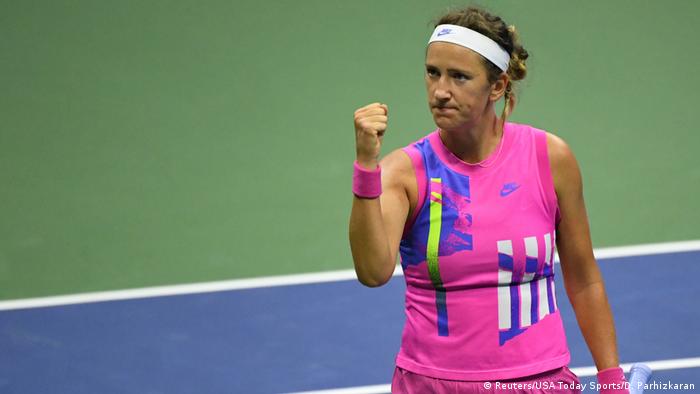 Victoria Azarenka is one of Belarus's most successful sports stars

"Sport is very important for Lukashenko because he understands the power of sport and the power of athletes," Opeikin said. "For him, it's a kind of legitimization. He is a really paranoid dictator. And as a paranoid dictator, he wants to control all spheres of Belarusian life. Sport is not excluded."

Blurring the lines between sport and politics, Lukashenko is also in charge of the Belarusian National Olympic Committee (NOC), seemingly a clear violation of the Olympic Charter, which states that "NOCs must preserve their autonomy and resist all pressures of any kind."

Rob Koehler, head of the athlete-led movement Global Athlete, calls this a "facade." He told DW that the IOC is employing double standards. "They say that the world of sport must have autonomy but yet you have the leader of a country that is head of the NOC. Where is the autonomy in that?"

The Free Union of Athletes is planning to send a letter to the IOC later this week. A draft version seen by DW calls on the organization to uphold its charter. "The National Olympic Committee (...) has become an accomplice in lawlessness and discrimination and is headed by people primarily responsible for what is happening now in Belarus," part of the letter reads.

It concludes: "We ask the leadership of the International Olympic Committee to show solidarity with athletes (...) and not to remain indifferent to the actions of the NOC Belarus, which is associated with discrimination and violence." Some observers have suggested Lukashenko's actions could warrant an investigation by the IOC's ethics committee.

The IOC, which currently bans athletes making political statements at the Olympics under its so-called Rule 50, only responded after publication, saying it "has neither the mandate nor the capability to change the laws or the political system of a sovereign country and will therefore not comment on the political developments in any country."

In response to the content of this article, the IOC said: "We have not been contacted by any [athlete] on this issue. Nevertheless, we made contact with the NOC to seek clarification. If an athlete would be suspended from the Olympic team because he or she has expressed his or her political view, the IOC would, of course, look into such a case."

Opeikin, though, believes Lukashenko's connection to the country's most beloved sports stars could ultimately prove to be his undoing.

"It's a very big problem for him," Opeikin said. "He cannot arrest people from sport. He understands what resonance it will have with Belarusian society. He knows how big the reaction can be from the international community. Athletes have a very strong power now in Belarus."

The head of the Tokyo Olympics organizing committee said the Games would be "scrapped" rather than delayed a further year to 2022. With stadiums built and tickets sold, who will pay the price if that happens?