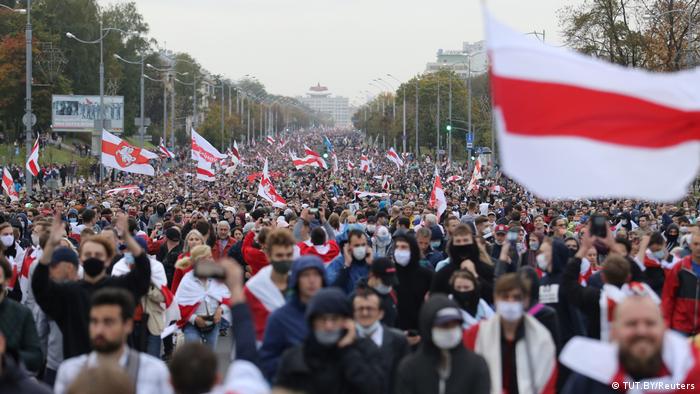 Around 100,000 protesters marched through central Minsk on Sunday, despite rain and a heavy police presence, to show their opposition to embattled Belarusian leader Alexander Lukashenko.

Activists had called for demonstrators across the country to come out for what they called a "people's inauguration" of Sviatlana Tsikhanouskaya, Lukashenko's main opponent who is now living in exile. Many at the event wore the red-and-white opposition colors and chanted "impostor" and "Sveta is our president."

Security forces arrested "around 200" people nationwide, according to the country's Interior Ministry.

Sunday's rally came days after Lukashenko held a secret swearing-in ceremony for his sixth term in office, angering his opponents and drawing condemnation from the US, EU and Britain.

Lukashenko continues to crack down on Belarus protests

'We've come to stop this regime'

DW correspondent Nick Connolly in Minsk said authorities had sought to make it difficult for people to gather in the city center, but that protesters weren't deterred.

There was "a sense that this inauguration by Alexander Lukashenko had really angered Belarusians to such an extent that they were willing to come out and risk arrest, detention and this kind of weather," he said.

Police locked down a number of Minsk metro stations and deployed water cannons and armored vehicles on side streets ahead of the march. Authorities also switched off mobile internet, and Lukashenko's residence, the Palace of Independence, was heavily guarded by soldiers.

Demonstrations drawing hundreds of thousands of people have rocked Belarus since August 9 when Lukashenko claimed a landslide victory in elections that the opposition and Western governments say was rigged. The 66-year-old, who has ruled the ex-Soviet state for the past 26 years, rejects allegations of vote manipulation and instead blames the unrest on foreign interference.

Tsikhanouskaya, Lukashenko's election rival who fled to neighboring Lithuania after the vote, said she supported demonstrators taking part on Sunday.

"Today is the 50th day of our protests," she said in a video address. "We've come out to stop this regime, and we are doing this peacefully."

Since the protests began, police have detained thousands of people who have reported suffering abuse and torture in custody. A number of people have also died in the crackdown by security forces.

Besides Lukashenko's resignation, demonstrators are calling for free and fair elections, the release of political prisoners and an investigation into police brutality.

European leaders have vowed to impose sanctions on Belarusian officials over the post-election violence and have said they do not recognize Lukashenko as president.

"We are witnessing a power crisis in Belarus with an authoritarian administration that is not able to accept the logic of democracy," French President Emmanuel Macron told le Journal du Dimanche in comments published on Sunday.

"It is clear that Lukashenko must go."