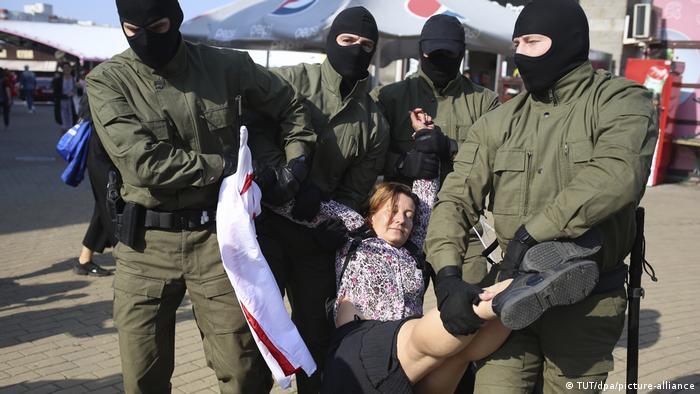 Hundreds of women joined a protest in the Belarusian capital, Minsk, on Saturday to renew calls for President Alexander Lukashenko to step down.

Police arrested more than 80 demonstrators, as well as some journalists, according to the Viasna human rights organization. Rallies were also taking place in other cities.

Video footage of the march showed a heavy police presence with officers carrying women by their hands and feet to buses. 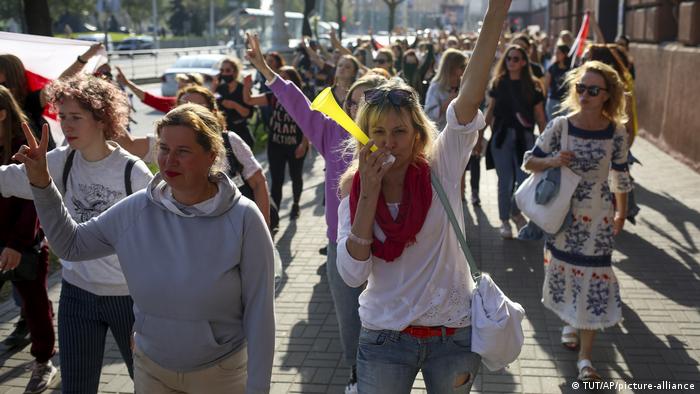 Hundreds of thousands of Belarusians have been protesting since early August

Demonstrations drawing hundreds of thousands of people have rocked Belarus since August 9 when Lukashenko claimed a landslide victory in elections that the opposition and Western governments say was rigged.

Lukashenko has rejected allegations of vote manipulation, and instead blames the unrest in Belarus on foreign interference.

Sviatlana Tsikhanouskaya, Lukashenko's main election opponent who fled to neighboring Lithuania after the vote, issued a statement on Saturday praising the female demonstrators and criticizing the police.

"You are strong and invincible," she said.

"What about the men themselves, who, hiding their faces, use force against women? Is it possible to live peacefully with such men?"

Lukashenko was sworn in for his sixth term earlier this week in a secret ceremony, sparking an outcry from his opponents. The move was also condemned by the United States and the European Union.

Security forces have detained thousands of people, including prominent opposition figures and journalists, since the protests began, but the anti-Lukashenko movement shows no sign of weakening.

Demonstrators are calling for the 66-year-old strongman to resign, fresh elections, the release of all political prisoners and an investigation into police brutality.

They've called a nationwide demonstration on Sunday, describing it as a "rehearsal for a proper inauguration by the people."

The Belarusian foreign minister is due to address the UN General Assembly later on Saturday.

Macron: Lukashenko 'has to go'

French President Emmanuel Macron said it is clear that President Lukashenko "has to go," in comments he made to French weekly Journal du Dimanche.

"It is a crisis of power, an authoritarian power that cannot accept the logic of democracy and which is hanging on by force," Macron told the Sunday newspaper.