Belarusians are taking their children to anti-Lukashenko protests | Europe| News and current affairs from around the continent | DW | 24.09.2020 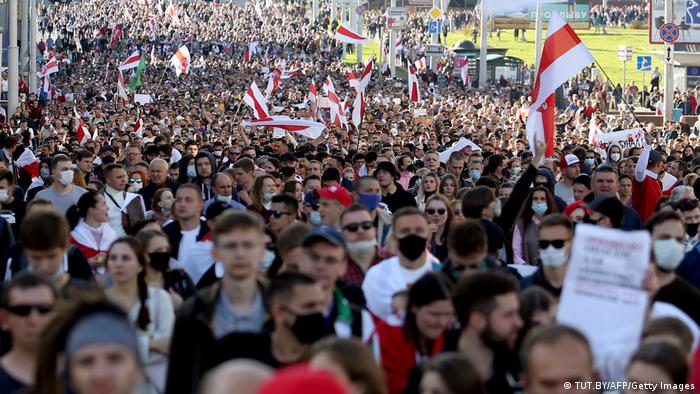 Belarusian Deputy Prime Minister Igor Petrishenko, whose job includes ensuring that children’s rights are respected, recently announced that legal action could be taken against people who bring their kids to demonstrations against President Alexander Lukashenko. Not only would they face the prospect of steep fines — but now also risk losing custody of their children.

The public prosecutor has already sent out 140 warnings to this effect. Yet few Belarusians are letting such threats deter them. DW spoke to a number of parents about their experiences, and whether they will continue taking children to protest marches.

"There are many ways of exerting pressure on families," Veronika, a journalist who has three children told DW. Even people who had done nothing illegal feared a knock at their doors, she said. Veronika wants her children to grow up in a free Belarus, where authorities do not abuse their power. "If we do not manage to establish democracy, equality and the rule of law now, it will on the next generation to do so."

Veronika and her husband have attended numerous anti-Lukashenko protests with their children. She was never concerned for their, or her own, safety. "For security reasons, you should always join a large group of people," she says. "When you realize there are thousands of people in the streets, you know there are nowhere near enough police officers to harm you."

"If protesters lose custody of their children, this will only add to their sense of frustration," said Alexey, who has a 4-year-old daughter and works in the financial sector. Belarusians will simply leave their kids at home and continue protesting, he said. Alexey's family moved from Brest to Minsk, where he and his partner have no relatives who can look after their daughter while they take to the streets. That is why, he said, "we took her along several times."

Alexey said his fellow protesters were cautious: "It is mostly well educated, intelligent people who go to the marches, which usually take place on wide streets with plenty of space to get out of the way." He said he was unaware of a single case in which police officers had arrested parents who brought children with them.

But Alexey is worried the situation could escalate further. He says protesters are increasingly at risk, with mass arrests common. He has therefore decided to attend protest marches on his own. But he thinks children should be made to understand what their parents are protesting for, "Because if we have no success changing this country, maybe one day they will."

"We attended all major protest marches," Elena, a mother of two teenage boys, told DW. Before the presidential election in August, she said she and her partner had never thought about the potential risks of protesting. So they took their 14 and 16-year-old sons along.

But, on August 9, the evening of the election, she was shocked to see police officers use violence against protesters. "After that, I decided to leave my children at home," she said. Elena is especially worried her teenage sons could fall victim to police brutality. "You never know what to expect from the police."

Elena said many schoolchildren had covered their notebooks with the country’s historical white-red-white flag, which has become a symbol of the anti-Lukashenko opposition movement. So far, she said, none of the teachers have complained about this.

At one Minsk school, authorities handed out red-and-green flags, which are used by Lukashenko loyalists to show support for the regime, said Natalia, an accountant who is the mother of an 8-year-old and a 15-year-old. "The children were told to march, and were filmed doing so."

Natalia took her children to just one protest march. "My oldest son is quite tall and could easily be mistaken for an adult," she said. "I’m worried about his safety." But Natalia said she had joined the anti-Lukashenko marches every day in the wake of the elections. Now, she limits herself to Sunday marches, where she spots many families with children — including infants. "I would not risk that," she said. "It is safer to go alone." She called the regime’s threat to take children from their parents an attempt at intimidation. "Legally, this is very difficult for authorities to do."

A father of two who works in education and asked to be called Oleg said he went to his local polling station on the election night to find out the results. But there was no information about the outcome, as members of the electoral commission had fled through the cellar.

Oleg said he and his family then closely followed the events unfolding in Minsk. "We witnessed apocalyptic scenes as we made our way home from work on the evening of August 11," Oleg said. "We could see neither cars nor means of public transport — only police officers and vehicles from the special security units on the streets." Oleg said he did not know how to explain the situation to his 8-year-old son, who, unlike his older daughter, lives with him.

Oleg said his son joined him at some of the anti-Lukashenko protests. "I wanted to drop him off with his grandmother on August 16, but he said he wanted to join us," Oleg said. "Then, he went and made his own red-and-white flag for the next march." But, now that authorities have threatened to take children out of their parents’ custody, his son must stay home, Oleg said. "This does not mean we are less committed to the opposition movement," he added. "We will bring up our children to become upstanding citizens, who are entitled to their own views and free speech."