EU leaders said the bloc does not recognize the "falsified results" of the Belarusian election or Alexander Lukashenko's swearing in as president. Meanwhile, authorities in Minsk said they arrested over 360 protesters. 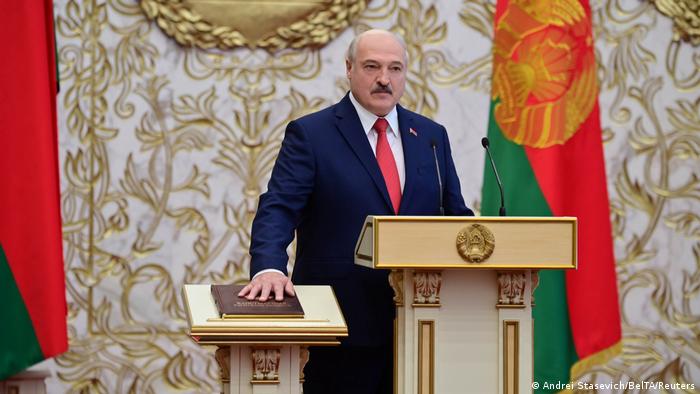 President Alexander Lukashenko is not the legitimate leader of Belarus, the European Union said on Thursday.

The EU does not recognize Belarus' "falsified results," the bloc's foreign policy chief Josep Borrell said in a statement on behalf of EU leaders.

Wednesday's "so-called inauguration" went directly against the will of the people, while the August 9 election was "neither free nor fair," he said.

Earlier on Wednesday, the United States and several European countries including Germany also said they refused to recognize Lukashenko as a legitimately installed leader. He was sworn into his sixth consecutive term in a secretive ceremony in Minsk.

Lukashenko, 66, who has led Belarus for more than a quarter century, responded defiantly to the rejection of his vote.

"They're shouting that they don't recognize us," he said at a meeting with Chinese Ambassador Cui Qirning. "We never asked anyone to recognize or not recognize our elections, or to recognize the legitimacy of the re-elected president or not," he said.

Lukashenko also responded to criticism of his decision to hold his inauguration without prior announcement and without live television coverage, in an apparent move to prevent protesters gathering.

He said that his motorcade drove through the city and some 2,000 people were invited to the ceremony including the military, arguing that "there was no secret."

The EU said it has been "impressed and moved by the courage of the Belarusian people who continue to demonstrate peacefully for democracy and for their fundamental rights despite the brutal repression of the Belarusian authorities."

"The European Union's position is clear: Belarusian citizens deserve the right to be represented by those they freely choose through new inclusive, transparent and credible elections," the statement said.

Meanwhile, Belarus police said they detained 364 protesters following Lukashenko's inauguration on Wednesday. "A total of 363 citizens (252 of them in Minsk) were detained yesterday for violating the law on mass events," the Interior Ministry said in a statement.

Of those detained, 320 were kept in custody for their cases to be reviewed by a court, the statement said, noting 59 separate protests in various parts of the country.

There have been protests in Belarus every day since the election, with police responding with a violent crackdown. Demonstrators have been met with physical violence in the streets, mass arrests and torture.