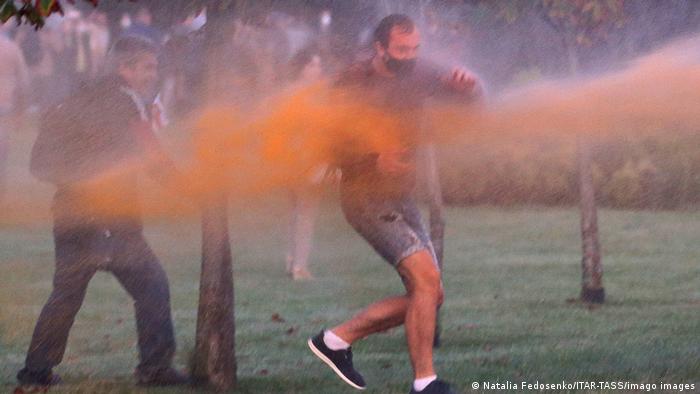 He said the move was needed after President Alexander Lukashenko's "fraudulent inauguration."

"We will apply all the tools at our disposal to hold Lukashenko and his regime to account,'' Raab said in the House of Commons on Thursday. "We do not accept the results of this rigged election."

Read more: Protests in Minsk after Alexander Lukashenko sworn in at secret ceremony

The British foreign secretary told Parliament that the government would be working closely with the United States and Canada "to prepare appropriate listings as a matter of urgency."

Reuters reported that the UK, the United States and Canada could have measures in place from Friday.

The UK brought in its 'Magnitsky' law in 2018 ahead of its departure from the European Union to sanction those responsible for human rights violations.

The legislation takes its name from the Kremlin critic, Sergei Magnitsky. The lawyer's 2009 death in a Moscow prison led several Western countries to impose sanctions on Russian officials.

Protests have taken place every day in Belarus since the contested presidential vote more than six weeks ago.

Lukashenko, who has led the country for more than a quarter of a century, launched a brutal crackdown against demonstrators who say the election was neither free nor fair.

They say opposition leader Sviatlana Tsikhanouskaya comfortably beat the 66-year-old, who was sworn in as president for a sixth consecutive term during a secretive inauguration ceremony in Minsk on Wednesday.

The US, Germany and several other European countries refuse to recognize his victory, although all have stopped short of calling on him to stand down.

Tsikhanouskaya held talks with EU foreign ministers on Monday, which drew allegations of interference from Moscow.

Maria Zakharova, a spokesperson for Russia's foreign ministry, said the meeting "runs counter to the goal of restoring stability."

The EU has been unable to agree on its own sanctions list after Cyprus vetoed the measures earlier this week in anger over fellow EU member states failing to punish Turkey over its drilling in disputed waters of the eastern Mediterranean.