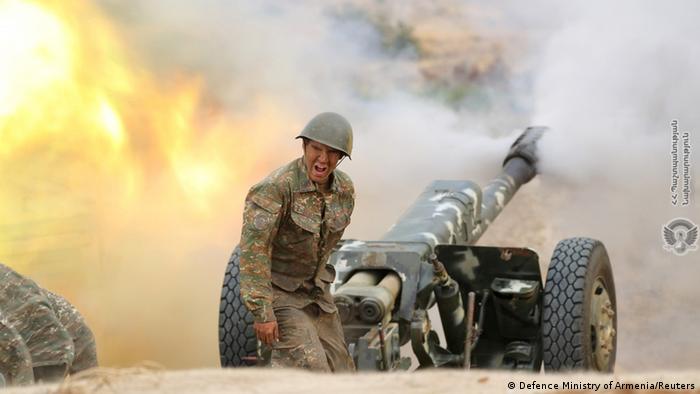 Fighting between Azerbaijan and Armenian forces entered its fourth day on Wednesday in the biggest eruption in a decades-old conflict since a 1994 ceasefire. Azerbaijan and the ethnic Armenian enclave of Nagorno-Karabakh said there were attacks from both sides along the line of contact that divides them.

Two explosions were heard in Stepanakert, the capital of the breakaway enclave, around midnight. Sirens were sounded and public lighting was shut as residents said the city had been attacked by drones.

Over a hundred people, including civilians, have died and hundreds more have been wounded  in fighting that began on Sunday and has spread far beyond the enclave's borders.

Russian Foreign Minister Sergei Lavrov on Wednesday said that Moscow was willing to host the foreign ministers from both countries for talks.

But both Armenia and Azerbaijan once again rejected international calls for negotiations and vowed to keep fighting.

Negotiations at an impasse

Azerbaijani President Ilham Aliyev said the conflict would continue until Armenian troops pull out of Karabakh.

If "the Armenian government fulfills the demand, fighting and bloodshed will end, and peace will be established in the region," he said while visiting wounded soldiers on Wednesday.

Armenian Prime Minister Nikol Pashinyan also said talks were not yet on the table.

"It isn't very appropriate to speak of a summit between Armenia, Azerbaijan, and Russia at a time of intensive hostilities," Pashinyan said. "A suitable atmosphere and conditions are needed for negotiations."

Karabakh separatist leader Arayik Harutyunyan on Wednesday said that the rebels had to "prepare for a long-term war."

This has sparked further concern of an all-out war between Armenia and Azerbaijan, drawing in regional powers like Russia and Turkey.

A day earlier, Armenia had accused a Turkish jet of downing one of its warplanes, a claim Ankara fiercely denied.

The claim was reiterated by Karabakh rebel leader Harutyunyan. "The real enemy is Turkey," he said.

Direct Turkish military action against Armenia would mark a major escalation after days of violent clashes between the two former Soviet republics.

Turkish President Tayyip Erdogan has said that Azerbaijan must take matters into its own hands, on Tuesday saying it was "fully ready" to help Azerbaijan recover Nagorno-Karabakh.

The continued fighting has increased worries of destabilizing the South Caucasus region.

Nagorno-Karabakh is a breakaway region inside Azerbaijan run by ethnic Armenians but is not recognized by any country as an independent republic.

Some of Turkey's NATO allies are increasingly alarmed by Ankara's stance.

"I have noted Turkey's political statements which I think are reckless and dangerous," Macron told reporters in Latvia's capital, Riga, during a visit to the Baltic European Union state.

"France remains extremely concerned about the bellicose comments that Turkey made in the last hours, which essentially remove any inhibitions from Azerbaijan in what would be a reconquest of northern Karabakh. That we will not accept," he added.

The French president discussed the tensions with his Russian counterpart Vladimir Putin on Wednesday evening. Both leaders called for a "complete" halt to fighting in Karabakh, according to a statement from Moscow.

"Vladimir Putin and Emmanuel Macron called on the warring sides to halt fire completely and as soon as possible, de-escalate tensions and show maximum restraint," the Kremlin said after a telephone call between the two leaders.

Macron and Putin also discussed potential future steps that the Minsk Group, which includes France, Russia and the US, could take to de-escalate the conflict.

Macron is scheduled to speak with US President Donald Trump on Thursday before reporting on the situation to the European Council of EU leaders.

Kremlin spokesman Dmitry Peskov echoed Macron's position. "We still call on all regional countries to exercise restraint and we call on conflict sides, in particular, to immediately cease hostilities," he said Wednesday.

The Kremlin said Russia's military was closely watching developments over Nagorno-Karabakh and urged the opposing sides to end hostilities.

And the UN Security Council called on both sides for an immediate end to the fighting.