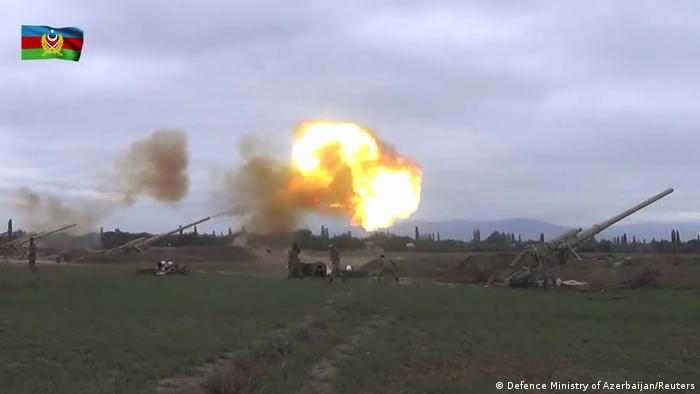 Armenia's defense ministry accused Turkey on Tuesday of shooting down an Armenian warplane, in the ongoing violent conflict between Armenia and Azerbaijan.

Defense ministry spokeswoman Shushan Stapnyan said an SU-25 warplane was downed, and its pilot killed, by a Turkish F-16 fighter jet amid clashes over Azerbaijan's breakaway region of Nagorno Karabakh.

"Armenia should withdraw from the territories under its occupation instead of resorting to cheap propaganda tricks," Altun said.

The move would represent a major escalation in the decades-old conflict between Armenia and Azerbaijan over the region, that was reignited on Sunday.

Earlier in the day, Azerbaijan's Defense Ministry said Armenian forces shelled the Dashkesan region in Azerbaijan. Armenian officials said Azerbaijani forces opened fire on a military unit in the Armenian town of Vardenis, setting a bus on fire and killing one civilian.

Armenia's Foreign Ministry denied shelling the region, and said the reports would justify Azerbaijan "expanding the geography of hostilities, including the aggression against the Republic of Armenia."

Armine Alexanyan, deputy minister of foreign affairs for the disputed region, said the country is "opting for war."

"The Azerbaijani side has been announcing that if it doesn't reach peace through negotiations, it will opt for war, and that's exactly what it's doing now;" Alexanyan told DW.

"Azerbaijan has been building up its arms for a long time now, spending billions of dollars on buying new high-tech equipment, including these unmanned drones, which now it's testing, hoping to regain what it thinks belongs to it," she said.

Meanwhile, the Azerbaijani Prosecutor's office said that 12 civilians have been killed and 35 wounded by Armenian fire. The statement marked a sharp rise in reported civilian casualties.

Dozens more have been killed or wounded since clashes broke out. Nagorno-Karabakh lies within Azerbaijan but has been under the control of ethnic Armenian forces backed by the Armenian government since 1994.