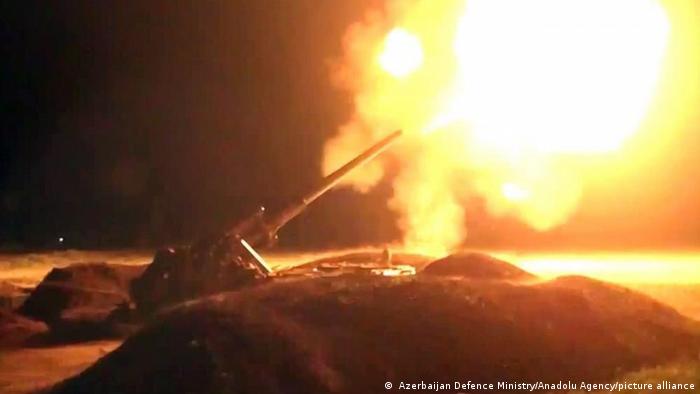 Fighting between Azerbaijani and Armenian forces in the Caucasus continued overnight into Tuesday, following two days of escalation and numerous casualties reported in the disputed Nagorno-Karabakh region.

Armenian forces reportedly attempted to launch counterattacks on the third day of the conflict in order to recover several villages that had fallen into the hands of the Azerbaijani military on Monday.

The two sides have employed heavy artillery with both military and civilian targets being hit.

German Chancellor Angela Merkel called for an immediate end to the violence after speaking with the Armenian prime minister, Nikol Pashinyan, on Monday and the Azerbaijani president, Ilham Aliyev, on Tuesday.

"The chancellor ... urgently called for an immediate ceasefire and a return to the negotiating table," her spokesman Steffen Seibert wrote on Twitter.

On Tuesday evening, the UN Security Council called on both Armenia and Azerbaijan to "immediately stop fighting" over the region.

In a statement, the 15 members of the council "voiced support for the call by the Secretary General on the sides to immediately stop fighting, de-escalate tensions and return to meaningful negotiations without delay."

The council added that they "strongly condemn the use of force and regret the loss of life and the toll on the civilian population" in the enclave.

The UN Security Council said it confirmed its "full support" for the role of the co-chairs of the Organization for Security and Cooperation in Europe's (OSCE) Minsk Group (US, Russia and France) who have mediated peace efforts. The council encouraged the parties to work closely with the co-chairs "for an urgent resumption of dialogue without preconditions."

Nagorno-Karabakh is an Armenian enclave region officially part of Azerbaijan but currently controlled by Armenian forces. Azerbaijan has repeatedly threatened to take back the territory by force.

The current fighting is the worse since the early 1990s, when a 1994 Russian-brokered ceasefire stopped the Nagorno-Karabakh War, which killed 30,000 people. 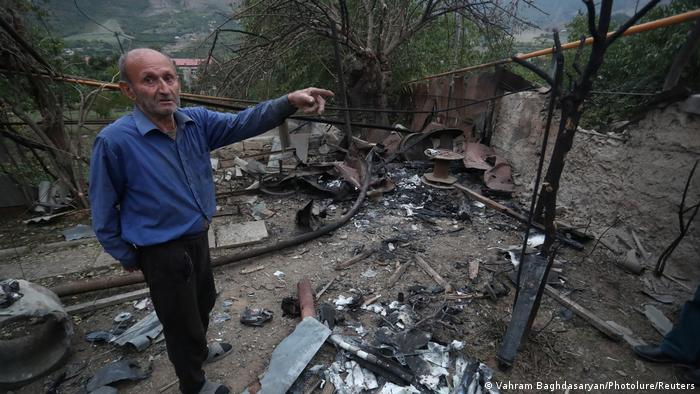 US Secretary of State Mike Pompeo said Tuesday that "both sides need to stop the violence" and "return to substantive negotiations as quickly as possible,"

The US and France have both said negotiations should be mediated by the so-called Minsk Group, which was set up in the early 1990s to resolve the ongoing dispute. It is co-chaired by France, Russia and the US.

The last Minsk Group push for peace collapsed in 2010.

"We will trigger in the coming days a co-ordination of the Minsk Group to clear up what happened, who is responsible and find a way out," an official at French President Emmanuel Macron's office said on Tuesday.

Kremlin spokesman Dmitry Peskov called on Turkey to work on bringing an end to the clashes with "political and diplomatic means," adding Turkey should not provide arms to ally Azerbaijan.

So far, at least 84 people have been killed in the latest bout of violence.

Lilit Makunts, an Armenian parliamentarian from the ruling My Step alliance, wrote on Twitter calling Azerbaijan's aggression an "attempt at ethnic extermination."

Azerbaijan Defense Ministry spokesperson Vagif Dargyakhly rejected claims by the Armenian forces that they had taken back territory overnight.

"The Armenian side continues to spread misinformation that it allegedly managed to return the previously lost territories. I want to state that all the territories liberated from the Armenian occupation during the fighting are held and controlled by the Azerbaijani military," Dargyakhly told Interfax-Azerbaijan on Tuesday.