Three days of fighting between Armenian and Azerbaijani forces have left at least 16 people dead. The clashes are the worst between the two South Caucasus nations in several years. 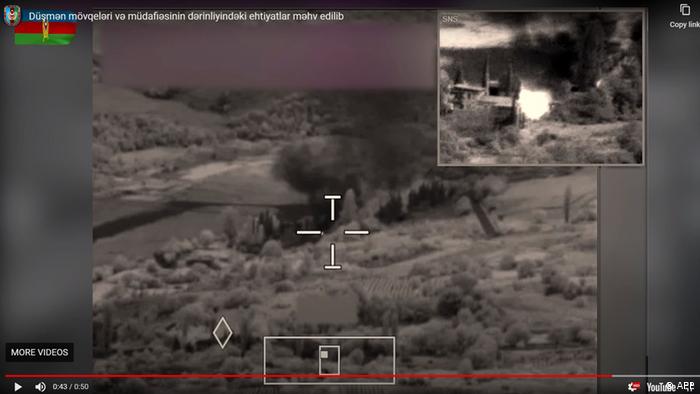 Armenian and Azerbaijani troops clashed on the border between the two countries for a third day on Tuesday, with both sides reporting losses amid heavy artillery fire.

Azerbaijan reported that 11 soldiers and one civilian had been killed since fighting broke out on Sunday, while Armenia said four of its troops were killed on Tuesday.

The hostilities are the worst since scores died in violent clashes over four days in 2016. The border between the two countries has seen repeated, deadly fighting over the past several years.

The two neighboring countries are enmeshed in an ongoing conflict over Nagorno-Karabakh, a region of Azerbaijan currently controlled by ethnic Armenian forces backed by Yerevan. The recent fighting was to the north of the disputed region, over which the former Soviet republics fought a war after the dissolution of the Soviet Union that ended in 1994.

Azerbaijan has recently built up its military and threatened to use armed force to regain control of Nagorno-Karabakh if necessary.

The sides have traded blame for the new spike in fighting, with Azerbaijan's defense minister accusing Armenia of trying to capture more Azerbaijani territory. Armenian officials say that Azerbaijani drones have targeted civilian infrastructure in the town of Berd in Armenia's Tuvush Province.

Armenia has also accused Azerbaijan of carrying out cyberattacks on Armenian government websites.

The United States and Russia, which together with France co-chairs the Minsk group of the Organization for Security and Cooperation in Europe, which has been mediating in the Nagorno-Karabakh conflict, have condemned the violence.

The spokesman for UN chief Antonio Guterres, Stephane Dujarric, said in a statement that Guterres "urges an immediate end to the fighting and calls on all involved to take immediate steps to deescalate the situation and refrain from provocative rhetoric."

Angela Merkel has offered Germany's help in forging a diplomatic solution to the conflict between Azerbaijan and Armenia. Baku is the chancellor's last stop on a three-day visit to the South Caucasus. (25.08.2018)

The Azeri town Tartar is on the border of the Nagorno-Karabagh region. Locals have witnessed decades of clashes between Armenia and Azerbaijan. Many have been forced to flee. DW's Seda Serdar went to learn more. (06.07.2016)

Coronavirus: Most Germans support stricter controls for New Year's, but not Christmas 3h ago