′No place like home′ for Nagorno-Karabakh′s displaced | Europe | News and current affairs from around the continent | DW | 06.07.2016

The Azeri town Tartar is on the border of the Nagorno-Karabagh region. Locals have witnessed decades of clashes between Armenia and Azerbaijan. Many have been forced to flee. DW's Seda Serdar went to learn more. 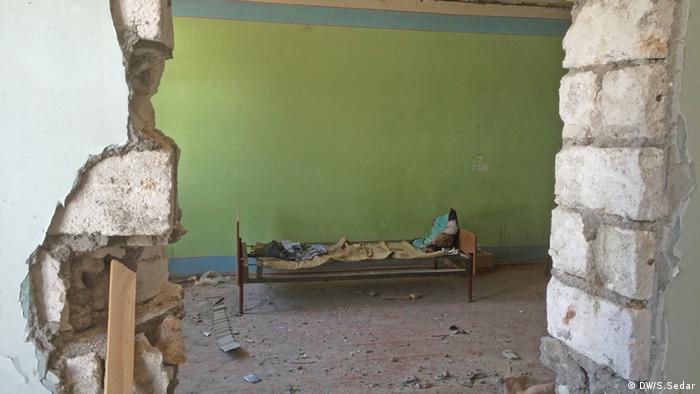 Just under 400 kilometers (240 miles) from Azerbaijan's capital, Baku, residents of the town of Tartar are still trying to recover from the "Four-Day War." The conflict over Nagorno-Karabakh - the most immediately consequential of the disputes between Azerbaijan, where the 4,400-square-kilometer (1,700-square-mile) region is located, and Armenia, which has assumed de facto control - escalated on April 2, leaving dozens of people dead on both sides.

Though a ceasefire is currently in effect, the conflict is a running presence in the lives of Azeris in this little town abutting Nagorno-Karabakh.

Sixty-seven-year-old Olga Kruglova, who came to Tartar at the age of 17, was not home when the attack happened in April, but her daughter was. "God saved us," said Kruglova, who has tried to put the events out of her mind. "These were very hard times. After the attacks I couldn't sleep at night. I woke up crying."

A six-year war between the former Soviet republics ended in 1994 with an estimated 30,000 casualties. More than 1 million people have been displaced, mainly Azeris.

Gulera Aliyeva, from the Fuzili district, is one of them. Now 80, she lives just outside of Baku, in Yeni Yasamal. She and her sons fought in the war in the 1990s. "I carried many dead bodies on my shoulders," Aliyeva said. "I have the proof provided by the Ministry of Defense that I fought on the front line. Now our condition is, as you see, it's difficult. If they need me, I would go to the front line again. I have the heart for it." But her biggest concern is her sons, who are now 44 and 46. She wants them to get married and settle down.

Another resident of Yeni Yasamal, 42-year-old Rana Aliyeva, lives in a small room with her children. Two single beds and closets are placed along the walls. A table sits in the middle of the room with three chairs, leaving little space for anything else. The stove located in the corridor is shared by all residents on that floor, just like the bathroom. She wants a better life for her children. Though she said she was grateful for the government's help, her frustration over the extremely difficult living conditions and the lack of space is apparent. More than that, she is eager to return to Nagorno-Karabakh. "I'm really grateful for everything," Rana Aliyeva said, "but there is no place like home." Her home is the Iangilan district, which is currently under Armenia's occupation. 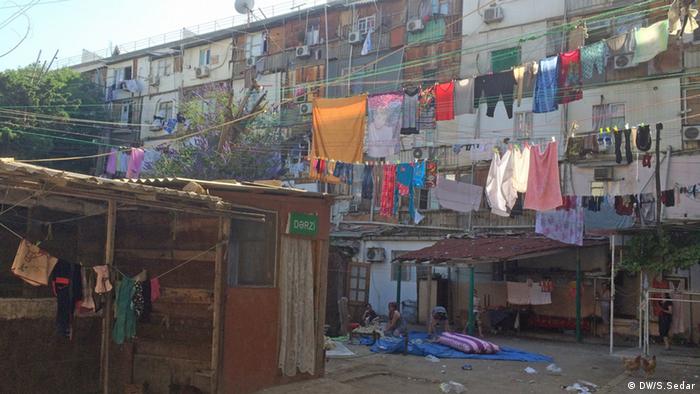 In addition to Nagorno-Karabakh, Armenia occupies seven other Azerbaijani regions, or "rayon," putting 12,600 square kilometers of Azeri territory in its western neighbor's control. Azeris who once lived in the affected regions have been dispersed. Almost all of the residents of Zengilan, one of the occupied regions, now find themselves living just outside of Baku, in Masazir. Sixty-six-year-old Priyev Ersad Ramazanoglu had lived in the slums near Rana up until two years ago, when he finally got a better apartment. His new community is calm, and people live in clean modern buildings. But this doesn't stop them from longing for their homes. "I would go back right now if there was peace," Ramazanoglu said with a bitter smile on his wrinkled face.

The conflict between Armenia and Azerbaijan is a very low-priority for the international community. Despite four UN Security Council resolutions over the years - the last, 1993's Resolution 884, demanded that Armenia withdraw - the occupation continues. Since a peace deal has never been reached, there is only the ceasefire, which is continually violated, most recently in April's flare-up. Both sides blame each other.

The aggression has become part of life for people who live near the contact line, such as the residents of Tartar. Nofal Aliyev was first wounded in 2000. As the fighting continued, the government built a wall around his home, which is located only 200 meters (650 feet) from the contact line. That didn't prevent his son from being wounded in 2014, and it didn't help his wife and granddaughter Zehra just one year later. Zehra, now 5, survived a wound to her head. 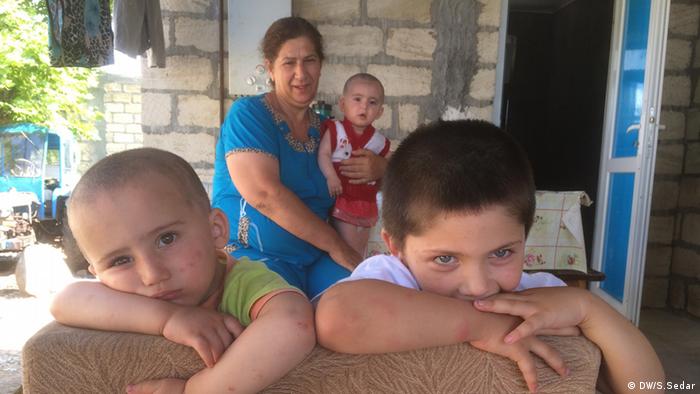 Zahra (right), now 5, survived a head wound from the conflict

The international community began a new push for a lasting solution after April's fighting. German Foreign Minister Frank-Walter Steinmeier recently visited both Baku and the Armenian capital, Yervan, as chair of Organization for Security and Co-operation in Europe. The Social Democrat was welcomed enthusiastically in Yerevan, especially with the visit taking place shortly after the Bundestag recognized the 1915 Ottoman atrocities against ethnic Armenians as genocide.

"The current status quo is not sustainable," Steinmeier said on his trip. Azeri officials agree with this and are optimistic that Germany's mediation could help bring the sides another step closer to a peace deal. The most active negotiator, however, has been Russia. Foreign Minister Sergey Lavrov is expected to visit Baku this week. There is also a possibility for a meeting in France in the coming weeks.

Finding common ground, however, will remain difficult. Azeri officials have called for the immediate de-occupation of the territories surrounding Nagorno-Karabakh - land recognized by the United Nations as belonging to Azerbaijan - as a first step. Armenia is intent on keeping these territories and would consider withdrawal a defeat. Security is the main concern for residents of towns on the front line, towns like Tartar. Despite the lack of that, despite continuous tension and uncertainty, life goes on in Tartar as shepherds lead their flocks of sheep over bumpy roads toward green fields.