The recently agreed ceasefire can't hide the fact that the raging conflict between Azerbaijan and Karabakh-Armenian separatists could herald a proxy war, according to Christian F. Trippe. 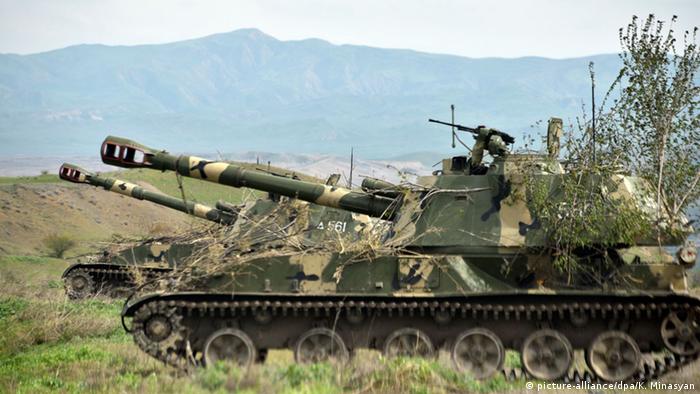 For a good 20 years, Armenians and Azerbaijanis warred with each other, looking furtively out of their trenches. The ceasefire that was agreed to in this "frozen" conflict was always precarious. Both sides have armed themselves in the years gone by. Shots have been fired across the demarcation line every so often with people dying. In the fall of last year, employees of the OSCE even came under fire. All the diplomatic attempts by Russia as well as the Europeans and the USA to find a peaceful compromise between the Armenians and the Azerbaijanis that led to something have regularly come apart; they didn't last long. Which is why it's safe to presume the ceasefire negotiated on Tuesday afternoon won't last long.

Baku and Yerevan really don't actually want to be helped in their fight over Stepankert (called Chakendi in Azerbaijani Turkic), the capital of enclave, Nagorno-Karabakh. Professional observers have known this for some time. Yet they were all surprised when, at the weekend, new fighting broke out. Even today, no one can say what started it. As usual, both sides accuse the other of provoking the exchange.

Creating the image of the enemy

Azerbaijan's ruling autocrat Ilham Aliyev has always promised his people that he would win back the lost region. Azerbaijan is suffering under the worldwide reduction in the price of crude oil. The Armenians in Nagorno-Karabakh, formally independent but in reality dependent upon grants from Yerevan and financial injections from those in the Armenian diaspora, have created something of a military state for themselves.

Anyone who's been in the region over the last few months would have heard the stories about the savagery of the respective other side. Azerbaijan has cultivated a cult of heroes around its 'martyrs,' who died in the war of secession at the beginning of the 1990s and along with it the picture of the 'bloodthirsty' Armenians. In Karabakh, the talk is about whether or not the Azerbaijanis are even their own country. Against the "Turks" there seems to be nothing that can't be done, as if the Karabakh race is to be held to account for the Turkish genocide of Armenians during World War I.

The long shadow of history is throwing darkness across the Southern Caucasus. An unresolved conflict over territory that was inherited from the days of the Soviet Union looks to become virulent again. Patterns of conflict seen in the last years of the Ottoman Empire are reappearing. Even centuries after the breaking down of the former empires, two successor states of Turkey and Russia are staring at each other, both driven by geostrategic ambition.

The danger of a proxy war

Putin and Erdogan have more than once made it clear that they suffer from political phantom pains: lost regions, overwhelming beliefs in the symbols of empire - whether from the era of the czars, the Soviets or the Ottomans - are making their way into contemporary politics. The skirmishes around the small enclave of Nagorno-Karabakh could quickly turn into a proxy war in which Russia and Turkey project all of their historical travesties.

The potential for escalation is substantial: Russia has made guarantees for Armenia's safety, stationing thousands of soldiers there. Officially, Moscow's security promises do not reach to the Armenians of Nagorno-Karabakh. But it's questionable whether one could distinguish the insignia on the fighter jets made in Russia. Turkey, on the other hand, still sees itself as the traditional protector of Azerbaijan, something Turkish President Erdogan has said loud and clear. If that backing is purely political or if it has a military responsibility attached to it, no one knows. The answer could only come with a question of peace or war - and not only one in the Caucasus.

Have something to say? Add your commentsbelow. The thread to this editorial closes in 24 hours.

Azerbaijani officials and representatives of Armenian rebels have agreed to halt the fighting in the disputed Nagorno-Karabakh region. The situation has "stabilized" according to a separatist official. (05.04.2016)

Clashes between Azerbaijani and Armenian forces have killed at least 13 people in a third day of fighting over Nagorno-Karabakh. Turkey is backing Baku as the worst violence in decades hits the disputed territory. (05.04.2016)

'No solution in sight' in the Nagorno-Karabakh conflict

Fighting between Armenia and Azerbaijan over the Nagorno-Karabakh region has resumed. Caucasus expert Uwe Halbach dates the territorial conflict back to the Soviet Union era. (04.04.2016)

India: At least 5 dead after blaze at world's largest vaccine maker 7h ago

Opinion: Joe Biden is the right US president for the moment 20h ago