Russia mediates as Azerbaijan and Armenia accuse each other of ceasefire violations | News | DW | 07.04.2016

Russia is taking the lead in mediating between Azerbaijan and Armenia over a flare-up of violence in Nagorno-Karabakh. There are worries that the explosive conflict could spiral out of control. 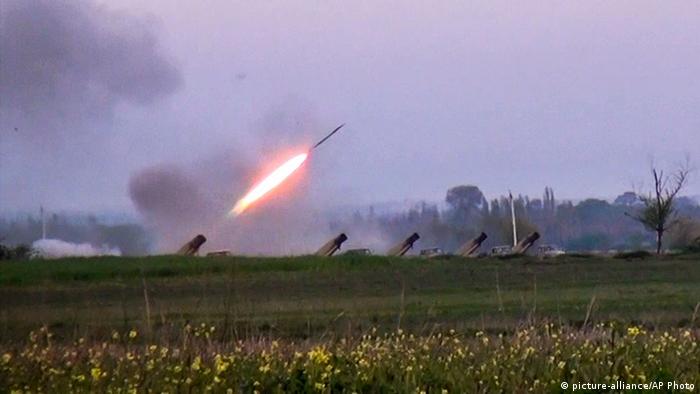 Azerbaijan and Armenia exchanged accusations that the other side violated a tentative two-day ceasefire in Nagorno-Karabakh on Thursday. Russia has moved to mediate an intractable frozen conflict in the volatile South Caucasus.

The exchange of fire across the contact line threatened to upend a Russia-brokered ceasefire reached on Tuesday, after four days of fighting left scores dead in the most violent flare-up in the contested region since a truce in 1994.

The post-1994 status left Nagorno-Karabakh, an ethnic Armenian territory, but officially a part of Azerbaijan, under the control of local Armenian forces and the Armenian military. Armenian forces also control at least parts of seven other regions of western Azerbaijan.

Russia, which has good relations with Armenia and Azerbaijan, sought to sooth tensions on Thursday, with Foreign Minister Sergey Lavrov in Baku and Prime Minister Dmitry Medvedev in Yerevan.

"Beyond all doubt, we are interested - maybe more than the other foreign partners of these two countries - in this conflict being settled as soon as possible," Lavrov said after meeting his Azeri counterpart, Elmar Mammadyarov. 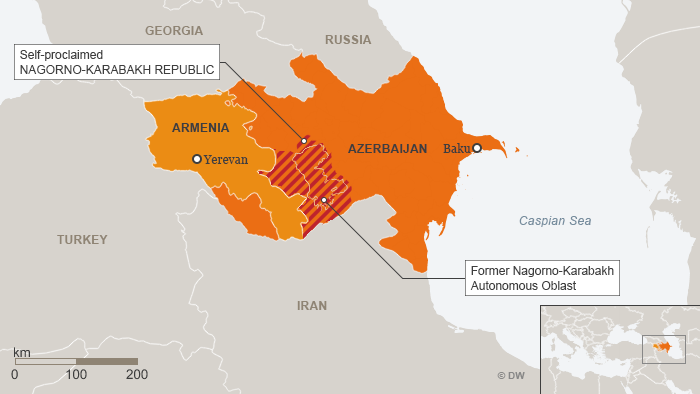 Russian President Vladimir Putin has also spoken with the Armenian and Azeri leaders.

Medvedev said after meeting with his Armenian counterpart Hovik Abrahamyan that Russia would use its influence over both sides to mediate the conflict.

"The main thing is to avoid the conflict entering a hot phase because that could have the most tragic consequences for the region," Medvedev told reporters.

Since the 1994 ceasefire, the Organization for Security and Co-operation in Europe's Minsk group, co-chaired by Russia, France and the United States, has sought to mediate the situation, with few results. Both sides of the conflict have maintained entrenched positions.

A 2005 draft peace plan never got off the ground amid. Medvedev said if the current truce held, he hoped talks could resume to find a sustainable solution to the conflict.

Russia appears to be taking the lead in the current conflict between the post-Soviet states, pushing out rival Washington, which has over the years tried to exert influence. Even neighboring Iran is now involved in mediating.

Explosive situation in a strategic region

The latest violence has sparked international concern over the combustible South Caucasus, a region criss-crossed by oil and gas pipelines and riven with ethnic hostilities.

Russia has good relations with both Azerbaijan and Armenia, providing weapons to both sides of the conflict, but is closer to Armenia, with which it has a collective defense treaty, and where it has a military base in Gyumri.

Turkey, which shares ethnic and linguistic ties to Azerbaijan, has vowed that it will stand by Baku until it reasserts sovereignty over all of its territory. Turkey closed the border with Armenia in the early 1990s over the conflict, giving Armenia land access to the outside world only through Georgia and Iran.

The wider concern is that Russia and NATO member Turkey's alliances with Armenia and Azerbaijan, respectively, could trigger a larger conflagration at a time Ankara and Moscow are at odds over Syria. Russia is the main backer of the Syrian regime, while Turkey is one of the main backers of rebels seeking to oust Syrian President Bashar al-Assad.

Long upset that one-seventh of its territory is under occupation, energy-rich Azerbaijan used high oil prices to go on a military spending spree, buying billions of dollars in weapons from Russia and Israel.

At times, Azerbaijan's defense budget has surpassed the entire government budget of Armenia, which has also built up its military. One difference between the conflict now and that of 1994 is that both sides have much more deadly and sophisticated weaponry. 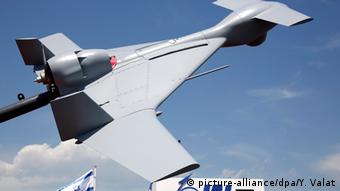 Azerbaijan has reportedly used the Israeli made Harop suicide drone.

The conflict over Nagorno-Karabakh started as the Soviet Union broke up in the early 1990s and has left at least 30,000 people dead and displaced more than a million, mostly Azeris.

The people of Karabakh and Armenia demand self-determination, and independence or unification with Armenia, while Azerbaijan wants the return of territories and the right of return for Azeris displaced from Nagorno-Karabakh and other areas under Armenian control.