The US, Russia and France called for a ceasefire between Azerbaijani and Armenian forces. Turkey, an ally of Azerbaijan, said the three Minsk Group powers should have no role in eventual peace talks. 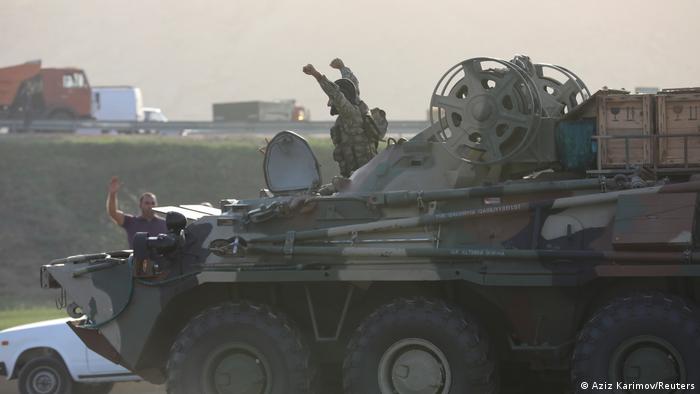 The presidents of the United States, Russia and France jointly called for a ceasefire between Azerbaijan and Armenian forces in Nagorno-Karabakh in a joint statement released on Thursday.

The trio of countries condemned the recent escalation of violence and appealed for peace in the disputed mountainous enclave.

Over 100 people, including civilians, have died and hundreds more have been wounded, including two French journalists, since fighting between Azerbaijani and Armenian forces erupted on Sunday. It is the biggest eruption in a decades-old conflict between the former Soviet republics over the area since a 1994 ceasefire.

The US, Russia and France co-chair the Minsk Group, set up in 1992 by the Organization for Security and Cooperation in Europe (OSCE) to encourage a peaceful, negotiated resolution to the dispute over Nagorno-Karabakh. The region is internationally recognized as part of Azerbaijan but is run by ethnic Armenian inhabitants.

What the US, Russia and France said

The presidents of the three countries said in a joint statement they "condemn in the strongest terms the recent escalation of violence along the line of contact in the Nagorno-Karabakh conflict zone."

"We deplore the loss of human lives and extend our condolences to the families of those killed and injured. We call for an immediate cessation of hostilities between the relevant military forces," the statement said.

The three countries called for Azerbaijan and Armenia to "commit without delay to resuming substantive negotiations, in good faith and without preconditions, under the auspices of the OSCE."

French President Emmanuel Macron and his Russian counterpart Vladimir Putin agreed over the need for a ceasefire in a telephone conversation late Wednesday. Their joint statement with the US was issued hours later on Thursday.

"I want to be very clear, on Sunday, the strikes that were launched from Azerbaijan had to our knowledge no justification," Macron said.

Both France and Russia are also concerned over Syrian mercenaries sent to Nagorno-Karabakh by Turkey, a close ally of Azerbaijan. Russia's Foreign Ministry issued a statement Wednesday urging "the leaders of interested states to take effective measures to prevent the use of foreign terrorists and mercenaries in the conflict."

Turkey said the three Minsk Group powers should have no role in peace negotiations.

"Given that the USA, Russia and France have neglected this problem for nearly 30 years, it is unacceptable that they are involved in a search for a ceasefire," President Recep Tayyip Erdogan told Turkish parliament on Thursday shortly before the joint statement was released.

Erdogan said a lasting ceasefire could be achieved only if "Armenian occupiers" withdrew from the disputed region.

Turkey has denied sending mercenaries but added that it will "do what is necessary" to support Azerbaijan.