Belarusian opposition leaders say the strongman's visit to a Minsk jail to meet his foes is a sign of weakness. After weeks of protests over his disputed election win, Lukashenko is now hinting at reforms. 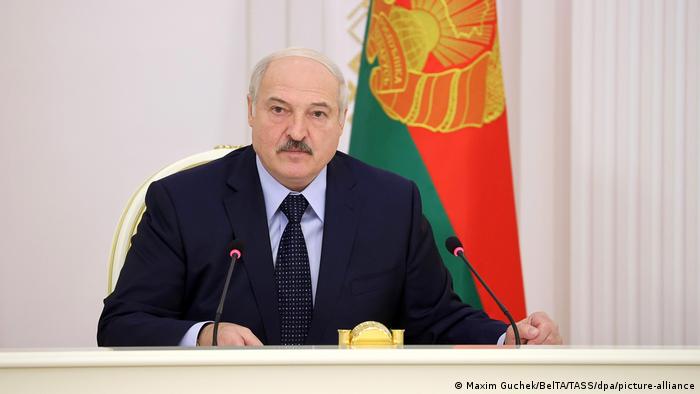 The bizarre yet officially reported meeting saw the strongman sit down with opponents he has jailed for months during anti-government protests against his disputed August 9 election win.

The picture shows opposition politician Viktor Babariko sat to the left of the president. Babariko was barred from running in the election and was detained in July along with his son.

Others include lawyer Liliya Vlasova, who is a member of the opposition's Coordination Council set up to ensure a peaceful transfer of power, and Vitali Shkliarov, a Belarusian-US strategist who worked on US Senator Bernie Sanders' presidential campaign and advised the Russian opposition.

"The aim of the president is to hear everyone's opinion," Lukashenko's press service wrote on Telegram, adding that the participants agreed to keep "secret" the content of the four-and-a-half-hour conversation.

In a brief video excerpt, Lukashenko told the prisoners: "You can't rewrite the constitution on the street," referring to the protests.

The opposition, however, described the visit as a sign of weakness. His main rival Sviatlana Tsikhanouskaya, who has taken refuge in Lithuania, wrote on social media that by going to the prison, Lukashenko "acknowledged the existence of political prisoners whom he used to call criminals."

Pavel Latushko. a former culture minister and ambassador to France, who joined the opposition's Coordination Council and was pressured by authorities to leave the country made similar remarks, saying: "Lukashenko was forced to sit down at the negotiation table with the people whom he jailed.''

Observers saw the visit as part of efforts to steal the protesters' thunder by offering vaguely-described reforms, such as a proposal to draft a new constitution.

Belarus has seen two months of protests since the contested poll, which Lukashenko's opponents say it was rigged to hand him a sixth term in power.

A violent crackdown on peaceful demonstrators in the first days after the vote, in which thousands were arrested and hundreds were beaten by police, provoked international outrage and helped swell protesters' ranks.

The European Union and the United States have slapped scores of Belarusian officials with sanctions but didn't target Lukashenko himself.

The massive demonstrations have continued, reaching their peak numbers on Sundays when up to 100,000 people flood the streets of the capital. Another big protest is planned for this Sunday.

On Saturday, hundreds of women marched through Minsk against the political repression and to demand a new election. Several participants were detained.