Protesters in Minsk demanding the release of political prisoners were met by police firing water cannons. Tens of thousands of people have taken to the streets of Belarus to oppose long-time leader Alexander Lukashenko. Tens of thousands of people took to the streets of Minsk on Sunday, marching to a detention center and demanding that Belarusian authorities release all political prisoners.

Mobile internet had been turned off to prevent protesters from organizing routes through the city and that subway stations were closed to prevent access to the city center.

Several people were arrested shortly after the march began and police used water cannons mounted on armored vehicles to disperse groups of demonstrators.

Despite police resistance, a group of demonstrators reached the walls of the notorious Okrestina detention center, chanting "let them out" and holding pictures of prisoners. 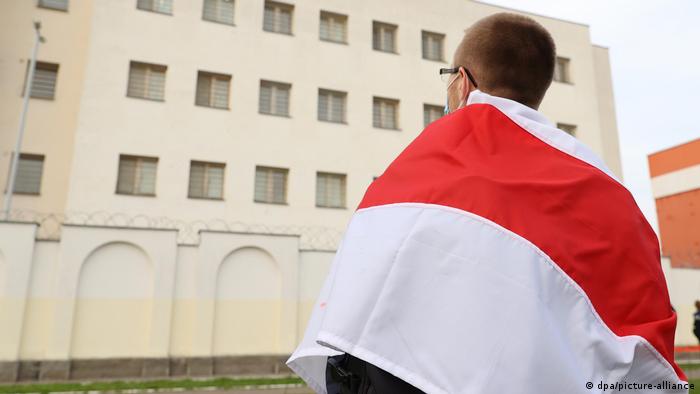 A protester stands outside a detention center in Minsk on Sunday

Detained protesters and political opponents of strongman Alexander Lukashenko are believed to be held in the detention center.

The Belarusian rights group Viasna said more than 100 demonstrators were detained Sunday during demonstrations in Minsk and elsewhere in Belarus.

The Belarusian journalists' association said at least three media representatives were taken into custody by police. Belarus withdrew the accreditation of all foreign reporters on Friday.

According to the Belarusian rights group Viasna, there are 77 "political prisoners" currently detained in Belarus.

Notable opposition figures behind bars include blogger Sergei Tikhanovsky, who was not allowed to run for president, and opposition leader Maria Kolesnikova, who destroyed her passport during an attempted forced deportation to Ukraine.

Kalesnikava faces up to five years in jail on charges of endangering national security.

"These are people who have suffered for their convictions, and are still suffering," Lukashenko's election opponent, Sviatlana Tsikhanouskaya, said in a statement ahead of the protest Sunday. "Our task is to set them free."

After the election, Tsikhanouskaya, and other opposition members, fled to Lithuania fearing arrest in Belarus. Tens of thousands of people marched through Minsk on Sunday

8th week in a row of protests

Opposition protests on Sunday have become a regular occurrence since Lukashenko was reelected on August 9 in what the European Union has called a rigged election.

Last week, around 100,000 people demonstrated in Minsk and 350 people were arrested.

On Friday, the European Union imposed sanctions targeting some 40 senior officials in Belarus who are accused of falsifying presidential election results and being behind the violent crackdown on peaceful protesters in the aftermath of the election.

Security forces in balaclavas have arrested hundreds of protesters during the latest massive demo in central Minsk. Dozens were immediately transferred to prison as rights groups again complained of police brutality.