There is no "plausible" explanation for Navalny's poisoning besides Russian involvement, the two countries said. They will push for EU sanctions targeting individuals and "an institution." 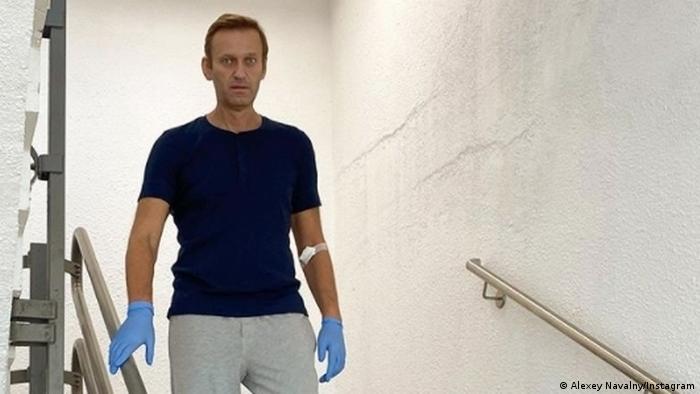 Germany and France proposed EU sanctions on Russia over its involvement in the poisoning of Russian opposition leader Alexei Navalny in a joint statement issued on Wednesday.

"Proposals will target individuals deemed responsible for this crime and breach of international norms, based on their official function, as well as an institution involved in the Novichok program," the statement said.

France and Germany saw no other "plausible explanation" than "Russian involvement and responsibility," after Russia had repeatedly failed to provide a credible explanation.

Navalny was flown to Germany two days after falling ill on August 20 during a domestic flight in Russia.

The UN's chemical weapons watchdog OPCW confirmed on Tuesday earlier findings that the opposition leader was poisoned by a nerve agent of the Soviet-developed Novichok group.

The proposal comes at the end of a day that saw both Navalny and German Foreign Minister Heiko Mass address the posioning incident and possible sanctions.

"A serious violation of international law was perpetrated with a chemical warfare agent, and something like that cannot remain without consequences," he told the Bundestag parliament.

"It is clear that if the events are not cleared up, if the necessary information is not provided, then targeted and proportionate sanctions against those responsible on the Russian side will be unavoidable."

Maas called the attack "a serious breach of international law" and said Germany would coordinate a response with its European allies and at the OPCW in the coming days.

Russia must "do more to investigate" the Navalny case, the German Foreign Minister told the UN General Assembly via video. Heiko Maas also urged a return to multilateralism, saying it delivered "results."