Russia must "do more to investigate" the Navalny case, the German Foreign Minister told the UN General Assembly via video. Heiko Maas also urged a return to multilateralism, saying it delivered "results." 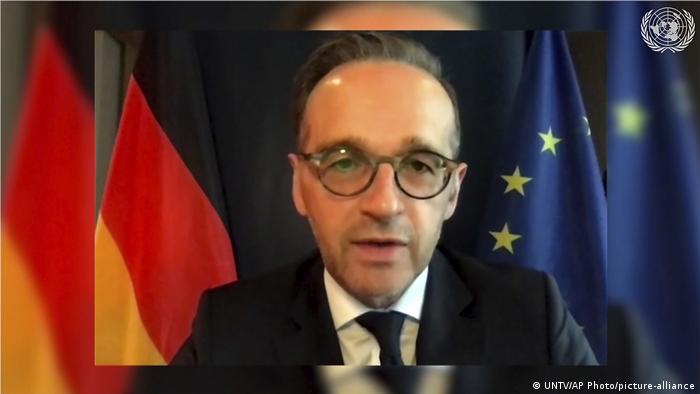 Challenging the Kremlin's denial of any involvement in Navalny's collapse that saw him flown from Siberia to a Berlin clinic last month, Maas described the affair as a "problem for the entire international community."

"I call on Russia to do more to investigate this case," said Maas, renewing again Germany's claim that it and "our partners" had identified the toxin Novichok was used in the poisoning.

"A case such as this must have consequences. The EU therefore reserves the right to impose sanctions," he warned.

75 years ago, after emerging from World War II that was instigated by Germany, the UN had decided to oppose "the law of the strong and promote the strength of the law," he said.

"We can listen to the voice of scientists and treat climate change as what it is, namely the biggest threat to security, prosperity and development on our planet."

Such indifference was a "disaster for millions of people in war and crisis areas."

Taking aim at US, Russia

In a swipe at US President Donald Trump's administration, Maas singled out "those who stand in the way of the work of institutions such as the International Criminal Court" and what he termed "rules-based order."

And, in a reference also to China and Russia, he added: "this applies to those who block the [UN] Security Council with one veto, one after another, and prevent its urgently needed reform with constantly new delay tactics."

On Libya, Maas praised the UN-mediated "rapprochement" that, he said, had led to a "major step forward" in recent weeks between its hostile factions.

In references to Egypt, the United Arab Emirates, Russia and Turkey, Maas said "forces outside the country [Libya] must also fall into line" and "cease sending weapons and mercenaries."

Getting them to honor their commitments was the aim of renewed talks on Libya's conflict that are due to take place in early October and will be hosted by Germany and UN chief Guterres.

Latest developments in relations between Israel and Arab nations in the Gulf were likewise "grounds for hope," said Maas.

"I have been in close dialogue with my counterparts in Jordan, Egypt and France in recent weeks," said Maas, "and we agreed that this new dynamic should be seized by the parties for fresh, credible negotiations on a two-state solution."

He urged Palestinians and Israel to "make compromises" and refrain from "unilateral steps such as annexation and settlement construction."

International cooperation to deal with COVID-19 had delivered results "far beyond the pandemic," asserted Maas, alluding also to the conflict in Ukraine.

"The negotiations between Russia, Ukraine, France and Germany have helped to bring about the longest ceasefire" since the conflict began in 2014, Maas said, and created grounds for hope for a "genuinely permanent solution."

The specter of war no longer hung over "hundreds of thousands of people," said Maas in the east of Ukraine — where its former President Petro Poroschenko announced Tuesday that he had tested positive for the novel virus.