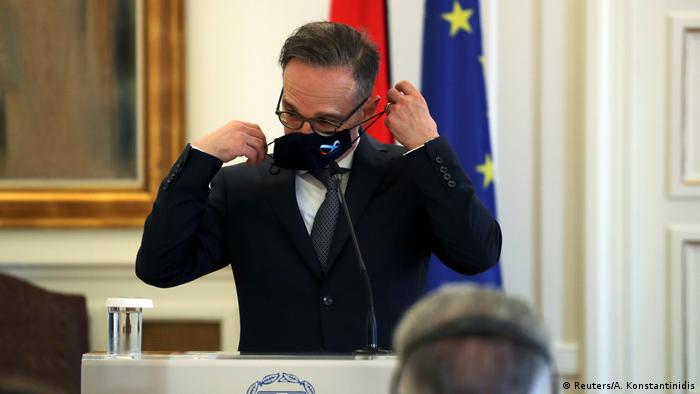 Germany's Foreign Ministry in Berlin said on Wednesday that Heiko Maas was self-isolating as a precaution after a security staff member tested positive for the coronavirus.

"Foreign Minister Maas put himself into quarantine after a member of his personal protection team was infected with COVID-19," the ministry said in a statement.

Also in "precautionary" quarantine is German Economy Minister Peter Altmeier, who said he had done so after learning that an employee of a EU colleague who had attended a Berlin business meeting last Monday had tested positive.

The Foreign Ministry said Maas' first COVID-19 test — following the alert over his staff member — had come back negative.

The 54-year-old Social Democrat politician was forced to call off his upcoming trip to Jordan as a result.

Maas had been in Brussels on Monday for talks with his EU counterparts, as well as a meeting with Belarus opposition leader Sviatlana Tsikhanouskaya.

A spokeswoman at the foreign ministry said that other affected individuals had also been contacted, and the ministry had sought advice on further steps it might take from health authorities. The ministry was also trying to ascertain if there were other potential contacts it needed to reach.

Read more:  Coronavirus: The race to save Germany

On Tuesday, a senior EU official entered quarantine in similar circumstances. European Council President Charles Michel, who chairs EU summits, called off a meeting of EU leaders after it emerged a member of his security team had been infected.

The talks of the 27 heads of state and government had been set to take place in Brussels on Thursday and Friday but have been pushed back by one week.

In March, German Chancellor Angela Merkel went into self-isolation after attending a medical check-up with a doctor who tested positive for COVID-19. Despite repeated negative tests she worked from home for around two weeks. It's not yet clear if the same will apply for Maas.