The Christian Democratic Union led by Chancellor Angela Merkel has thrown its support behind pursuing a new alliance with the Social Democrats (SPD). Merkel has stressed the importance of a stable German government. 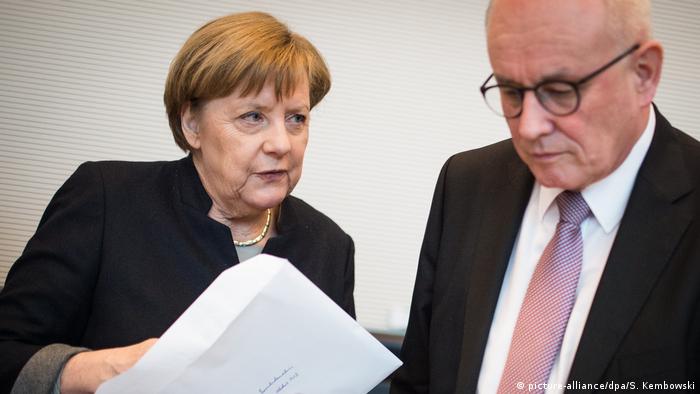 German Chancellor Angela Merkel called on Monday for "serious, engaged and honest" negotiations with the center-left Social Democratic Party (SDP), as she reaffirmed her desire to form a stable government.

She said that there were national and international expectations that Germany should "be able to function effectively."

SPD leader Martin Schulz, who immediately after his party's poor showing in September elections had rejected the idea of another "grand coalition," has meanwhile given more indications that he is moving away from any rigid position on the issue.

"No options are off the table," he said on Monday, though he added that there was no saying where preliminary talks, scheduled to begin on Thursday, would lead.

Merkel met with several other leaders in her center-right Christian Democratic (CDU) party in Berlin on Sunday to formulate a plan as Germany enters its second month without a new government.

After four and a half hours of deliberation, CDU officials told reporters they had agreed to pursue a new alliance with the center-left Social Democratic Party (SPD) to once again form a "grand coalition."

"We have the firm intention of forming an effective government," Daniel Günther, conservative premier of the state of Schleswig Holstein, told reporters. "We firmly believe that this would not come from a minority government, but instead an alliance with a parliamentary majority. That is a grand coalition."

Before the meeting, the head of the Christian Social Union — the CDU's Bavarian sister party — also threw his weight behind a "grand coalition."

"An alliance of the conservatives and the SPD is the best option for Germany — better anyway than a coalition with the Free Democrats and the Greens, new elections or a minority government," Horst Seehofer told German tabloid Bild am Sonntag.

Exploratory coalition talks between the CDU/CSU, the Greens and the business-friendly Free Democrats (FDP) collapsed last Sunday, sending Merkel's conservatives back to the drawing board.

The collapse of talks has placed increasing pressure on the SPD to rejoin a so-called grand coalition with Merkel's conservative bloc — an option that was first fiercely ruled out by SPD leader Martin Schulz following the party's record-low results in the September 24 election.

Under pressure to preserve stability in Germany and avoid new elections, the SPD reversed its stance and agreed to talk to Merkel, raising the prospect of a new "grand coalition" such as the one that has governed for eight of the last 12 years.

Merkel is facing pressure from within her party after the CDU's youth wing pushed for a quick coalition deal with the SPD.

On Sunday, the "Junge Union" or "Young Union" published a resolution urging the parties to reach an agreement by Christmas. They also said that the deal should not concede ground on core conservative issues, including immigration and budget.

Should an agreement not be reached by Christmas, the youth wing argued, then negotiations "should be viewed as failed" and Merkel's CDU/CSU should then opt for a minority government.

Merkel is not the only one facing internal pressure: Schulz also faced growing dissent within his party over his willingness to make a coalition with Merkel's conservative bloc.

The SPD's youth branch, the Jusos, or "Young Socialists in the SPD," ended their two-day congress calling for their leaders to move further to the left rather than try out a new grand coalition.

Their resolution called for SPD heads to "usher in true alternatives for progressive, solidarity and leftist policy from the opposition."

Christmas on the horizon

Other SPD leaders have also started setting conditions should the party enter into talks with Merkel's conservatives, including changes in health insurance and investment in education and homes. One of the more tricky points that is bound to cause conflict is the SPD's refusal of a cap on asylum-seekers — one of the Bavarian CSU's main policy goals.

"We have Christmas in four weeks, but one should deal with wish lists realistically," said CDU Deputy Chairwoman Julia Klöckner.

"With 20 percent, one cannot make 100 percent of the demands," added Hessen state premier, Volker Bouffier, referring to the SPD's tally during parliamentary elections in September.

While the CDU/CSU and the SPD are struggling under the pressure to form a new alliance, German voters appeared to be warming up to the idea.

According to a weekly Emnid poll conducted for Bild am Sonntag, support for the CDU/CSU jumped by 2 points to 33 percent while support for the SPD ticked up 1 point to 22 percent.

The rise of the far-right populist AfD in Germany has effectively shifted the political center in the opposite direction. The result is that the chancellor is now looking to parties on the left for potential allies. (24.11.2017)

An initial report said Angela Merkel's Bavarian sister party would be seeing a shake-up — a report the party quickly denied. Bavaria's state premier, Horst Seehofer, has been under pressure over election losses. (23.11.2017)