Al-Hashd al-Shaabi and Hezbollah: Iran′s allies in Iraq and Lebanon | Middle East | News and analysis of events in the Arab world | DW | 01.11.2019

Al-Hashd al-Shaabi and Hezbollah: Iran's allies in Iraq and Lebanon

Iran's regional allies have violently attacked protesters demanding political change in their countries. But where do Iran's interests end and their allies' domestic concerns begin? 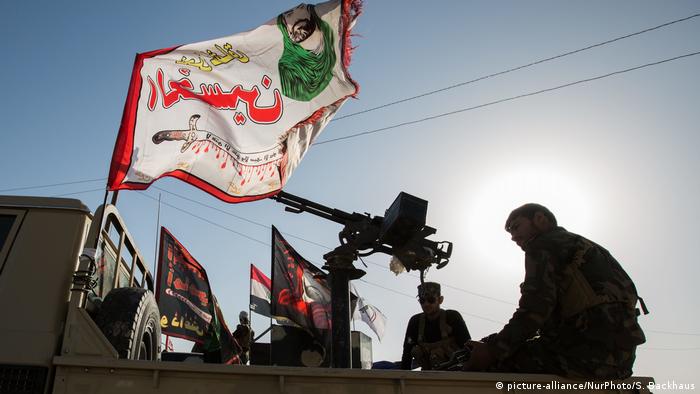 There may be much that unites recent protests in Lebanon and Iraq — a rejection of foreign-imposed confessional systems of government, an uncommon cross-sectarian unity, grievances against a perceived corrupt political elite — but now, shared regional influences threaten to derail the demands of demonstrators in both countries.

Both Iran and the United States have both spent significant strategic energy building networks of allies with political groups and armed factions in Iraq and Lebanon. While some of those sympathetic to Iran argue the protests are being used by its enemies to undermine Tehran, violence carried out by Iran's allies in both countries suggest Tehran is fearful of losing its influence in the face of protesters' demands.

After initially backing the demonstrations, supporters of Iranian-linked Hezbollah have since bashed protester in Lebanon. Iraq's Popular Mobilization Units (PMU) or al-Hashd al-Shaabi, major factions of which are closely associated with Iran, are widely suspected of deploying snipers and beatings to quell protests in Iraq, in which at least 250 people have died.

To what degree are these groups operating out of their own domestic interests or as Iranian proxies?

Who are the Hashd al-Shaabi?

Formed in response to a Shia fatwa calling for resistance to the threat of "Islamic State" (IS) in 2014, al-Hashd al-Shaabi is a group of more than 40 militias with various allegiances.

Iraqi Shia form most of al-Hashd al-Shaabi's ranks and the most powerful, including Kataeb Hezbollah (unrelated to Lebanon), Asaib Ahl al-Haq and the Badr Organization, have a long history with Iran. While the Iranian Revolutionary Guard Corps (IRGC) armed, funded and trained these groups as they fought the US after the 2003 invasion, their respective leaders also enjoy close ties with General Qassem Soleimani, head of Iran's elite Quds force.

With between 60,000-150,000 fighters, the group was instrumental in defeating IS in Iraq in the 2014-2017 war. Many of the militias are said to be self-sustaining through Iraqi government payments and their own informal economic sources.

The Iraqi government has attempted to bring al-Hashd al-Shaabi into the regular forces but there has been strong resistance to the move, with many unwilling to cede their newfound power to the state. They are represented in parliament by the Fatah alliance and have supported Prime Minister Abdel Mahdi, despite protesters' calls for his resignation.

Hezbollah in Lebanon is a political party with an affiliated militia that has enjoyed loyal support from its Shia base, but also other quarters in Lebanon, largely for its role in forcing Israel's withdrawal from southern Lebanon in 2000.

Formed with the backing of Iranian funds and IRGC training during the Lebanese Civil War, the group is now a major playmaker in Lebanese politics with alliances with President Michel Aoun and House Speaker Nabih Berri.

Hezbollah intervened in the Syrian war alongside the IRGC Quds forces to save Syrian President Bashar al-Assad's regime while at the same time working with Iran to build a power base in Syria parallel to the state.

Due to US sanctions, an openly hostile relationship with Israel and its non-state status, Hezbollah's military wing is highly secretive but estimated to be stronger than the Lebanese Army and effective in hybrid warfare.

What are their agendas in the protests?

While Nasrallah's warning that the country risked sliding into "chaos" was seen by some as an attempt to undermine the protests, Hezbollah could also stand to gain from the radical new system many protesters are demanding. Under a proportional representation system, the party's growing Shia base would have enough votes for higher offices than what is allowed under current rules, which demand the president be Christian, the prime minister Sunni and the house speaker Shia.

But such a shift would fundamentally redefine Lebanon and be fiercely resisted by the Christian groups who stand to lose out, likely leading to years of political turmoil. A potential power vacuum would create uncertainty for Hezbollah as well as Iran. Tehran's proxy war with Israel relies heavily on Hezbollah's strategic strength.

Hezbollah's position has been precarious. Torn between losing popular support from protesters demanding a completely new government with the slogan "all of them means all of them," it also faces turning against the alliances with Christian President Michel Aoun and Shia House Speaker Nabih Berri that have brought it such influence.

On Friday, Nasrallah called for Lebanon to quickly form a new government following the resignation of Saad Hariri as the country's prime minister.

But protesters' calls for accountability and transparency might also expose an organization whose operational secrecy has been one of its strengths.

Its decision, therefore, to signal to its core supporters that the protest movement needed to be shut down, resulting in its most ardent attacking protesters this week, showed a preference for the status quo, despite the risk of losing gains of popular support made in 2018 elections.

How do al-Hashd al-Shaabi view the protests?

Al-Hashd al-Shaabi has seen the attacks on its offices and accusations of corruption and Iranian influence as a direct challenge to Iraq's post-2003 political order and an existential threat.

"They worked closely with Iran to fight IS, because at the time their main goal was to protect the Iraqi system and IS was the biggest threat to the Iraqi system," Renad Mansour, a researcher at Chatham House, told DW.

While the actions of Iran's allies' do not appear to be dictated, analysts call the apparent coordination an alignment of interests.

Iran's supreme leader Ayatollah Ali Khamenei this week told Iraqis and Lebanese they "have some demands that are rightful, but they should know these demands can only be realized within legal frameworks."

"It's not like Tehran just sends their marching orders and the people in Beirut turn around 180 degrees," Heiko Wimmen, head of the Iraq, Lebanon, Syria Project at the International Crisis Group, told DW. "It's a process of communication between the capitals and they come to a common position."

Renad Mansour said while groups labeled as "proxies" might sometimes act on orders, "they also have room to interpret these orders too, they also have local considerations. They also have to believe what they are doing is in the best interests of their groups as well. It's a sort of alignment of strategic interests."

The military has admitted that it used "excessive force" against demonstrators amid clashes in Baghdad. The violence claimed several lives of protesters who are calling for the government to do more to help the poor. (07.10.2019)

Iraq's parliament votes to give legal status to Shiite militias

Iraq's parliament has voted to fully legalize state-approved Shiite militia once accused of abuses against the country's Sunni minority. The move was rejected by Sunni lawmakers, who fear the status will be misused. (26.11.2016)