Baghdad has ordered militias to join the army and their leaders to choose between paramilitary or political activity. The move comes amid concern that Iraq could become a battleground as US-Iran tensions spike. 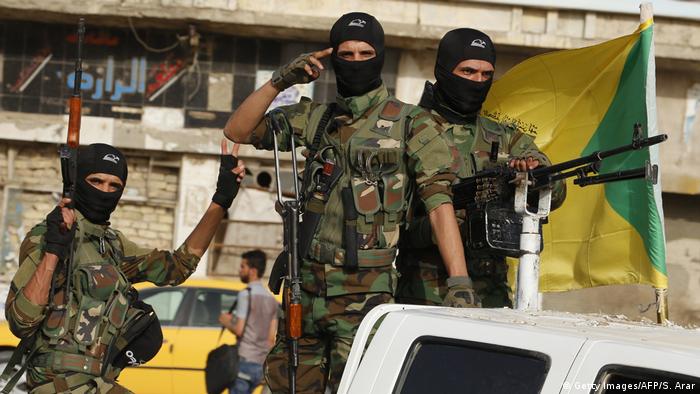 Iraqi Prime Minister Adel Abdul Mahdi has issued a decree seeking to bring mostly Iran-backed militias under the command of the armed forces.

The mostly Shiite militias fall under an umbrella grouping known as the Popular Mobilization Forces (PMF), powerful paramilitary and political forces that fought against the "Islamic State" alongside the US-backed Iraqi army.

In all there are about 140,000 battle-hardened armed men in militias in Iraq.

The PMF already report to the prime minister, who is the commander-in-chief of the armed forces, but their leadership has close ties to Iran.

Abdul Mahdi's decree, issued late Monday, if implemented, would force all PMF militias into the armed forces, abandoning their names and requiring their leaders to choose between paramilitary or political activity.

Militia headquarters, economic offices and checkpoints are to be closed and those who choose politics would be prevented from carrying weapons, the decree said. Any armed faction working "openly or secretly" against the new rules would be considered illegitimate.

The move comes amid rising US-Iran tensions in the region and worries that Iraq could become a proxy battleground following a series of unclaimed attacks near US forces or their interests in Iraq in recent weeks.

The United States has urged Iraq to rein in the militias and warned that it would respond with force if US interests were attacked.

It also comes after the Wall Street Journal reported that US officials have concluded that a drone attack on a Saudi oil pipeline in May originated from Iraq, not Yemen. Abdul Mahdi denied his country was used to stage any attacks.

Hisham al-Hashimi, a Baghdad-based security expert who advises the Iraqi government, told Reuters that by being formally part of Iraq’s army any attack on the militias would be considered an attack on Iraq.

"At this time I think Abdul Mahdi was incentivised because of American pressure to put them all in one box in order to protect them, but will they comply? Their compliance hinges on Iran's receptiveness to these orders,"  he said.

The move is also fraught with potential problems because militia leaders may simply get an upgrade into the formal chain of army command and political ties may not be fully cut. Disbanding 140,000 battle-hardened armed men with few alternative economic prospects has generally been considered to be unrealistic and dangerous.

It is unclear how Iran or militia leaders would follow the decree.

A political coalition of PMF militia leaders came in second in the 2018 parliamentary elections. The Fatah Alliance alongside a political coalition led by influential Shiite cleric Muqtada al-Sadr that won the election nominated Abdul Mahdi as prime minister.

Al-Sadr, who has fashioned himself into a populist nationalist leader against the influences of both Washington and Tehran, welcomed Abdul Mahdi's decree and announced he would cut ties with his powerful militia.

"What came from the prime minister on the PMF is an important thing and a correct first step towards building a strong state," Sadr said in a statement.

Kataeb Hezbollah, a powerful militia with close ties to Iran's Islamic Revolutionary Guard Corp, also welcomed the order and said it would abide by it. However, it said that its units fighting in Syria alongside President Bashar al-Assad's forces would not follow the rules.

Qais al-Khizali, the leader of the Asa'ib Ahl al-Haq, another Iran-backed group, also said he would comply with the new rules.

The US move to reimpose sanctions on Iran and choke off the last remaining sources of Tehran's oil revenue has crippled the Iranian economy. For many ordinary Iranians, it's becoming increasingly hard to get by. (24.06.2019)