US Secretary of State Mike Pompeo made a surprise visit to Baghdad over concerns Iran "is escalating their activity." The visit saw Pompeo skip a trip to Germany where he had been due to meet Chancellor Angela Merkel. 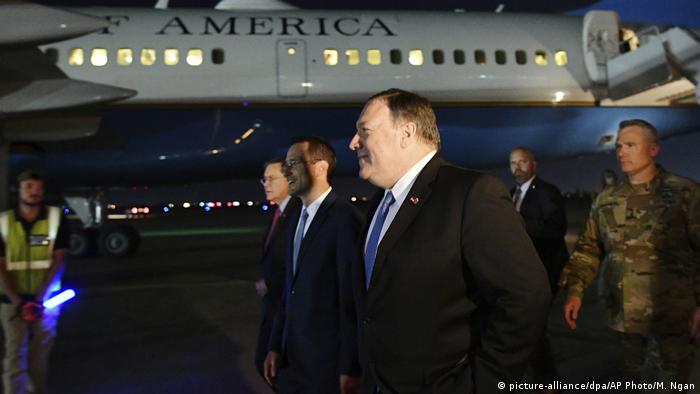 US Secretary of State Mike Pompeo made an unannounced trip to Iraq on Tuesday to meet with the Iraqi prime minister and other senior officials, citing US concern over Iraqi sovereignty due to increasing Iranian activity in the region.

Pompeo had been on his way to Germany where he was due to meet both Chancellor Angela Merkel and Foreign Minister Heiko Maas, but suddenly canceled the trip due to "pressing issues," the State Department initially said, without elaborating where he was going.

"I wanted to go to Baghdad to speak with the leadership there, to assure them that we stood ready to continue to ensure that Iraq is a sovereign, independent nation," Pompeo told reporters.

Following his meetings with President Barham Salih and Prime Minister Adel Abdel-Mahdi, Pompeo tweeted that he had met with Iraqi officials to "reinforce our friendship and to underline the need for Iraq to protect diplomatic facilities and Coalition personnel.

Iraq to protect US interests

Following the meetings, Pompeo said that Baghdad had promised to protect US interests, the French news agency AFP reported.

"We talked to them about the importance of Iraq ensuring that it's able to adequately protect Americans in their country," Pompeo said of his discussions with President Barham Saleh and Prime Minister Adel Abdul-Mahdi. "They both provided assurances that they understood that was their responsibility."

Pompeo said he made the four-hour trip to Iraq because Iranian forces are "escalating their activity" and the threat of attacks were "very specific."

"These were attacks that were imminent," Pompeo said without discussing the intelligence in detail.

"We wanted to let them know about the increased threat stream that we had seen and give them a little bit more background on that so they could ensure that they were doing all they could to provide protection for our team," he added.

US increases pressure on Iran

Pompeo's visit to Iraq comes after the US intensified its pressure campaign against neighboring Iran.

US national security adviser John Bolton said two days ago that the US was deploying the aircraft carrier USS Abraham Lincoln and its strike group to the region as well as a bomber task force because of a "credible threat by Iranian regime forces."

A year ago, US President Donald Trump decided unilaterally to withdraw from the 2015 Iran nuclear deal, which lifted economic sanctions on Iran in exchange for its abandonment of its nuclear weapons program.

Regarding threats from Iran or its proxies on US forces in Iraq, Pompeo said the US had a responsibility to respond to reports of threats.

"As Secretary of State I have a responsibility to keep the officers that work for me safe each and every day all around the world. That includes in Erbil and Baghdad, in our facilities in Amman, all around the Middle East," he said.

"And so any time we receive threat reporting, things that raise concerns, we do everything... that we can to make sure that those planned or contemplated attacks don't take place, and to make sure that we've got the right security posture," he said.

US military flare-up 'would be a godsend to Iran hardliners'

The US has announced that it will deploy an aircraft carrier to the Middle East to give a "clear message" to Iran that it is prepared to defend its interests. Crisis Group's Ali Vaez says the move could lead to a war. (07.05.2019)

Iran's president is on a high-profile visit to Iraq, focused on trade. The visit sends a signal that Iran has regional options against the United States' "maximum pressure" campaign against Tehran. (11.03.2019)