The Lebanese government is trying to placate mass protests with economic reforms. That plan could work, but achieving lasting change and progress requires commitment from the protesters, too, writes DW's Rainer Sollich. 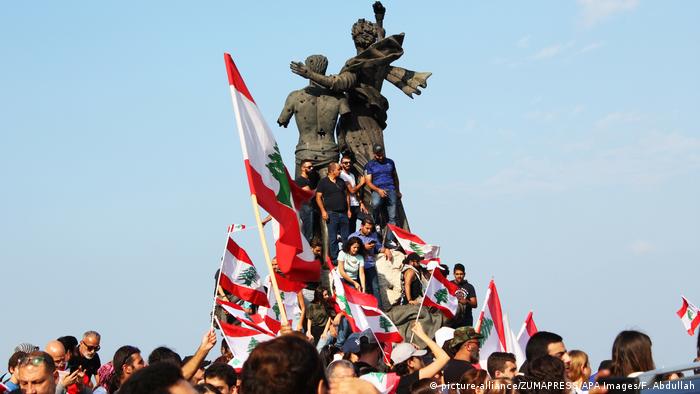 There is a saying that the road to hell is paved with good intentions. It is well suited to describing Lebanon's complicated political system, which was adopted after independence from French rule in 1943 and may now, once again, tip the Mediterranean country into crisis.

Dividing up the power among Lebanon's Shiites, Sunnis, Druze and various Christian minorities was certainly well intentioned and guarantees, to this very day, that no single group may dominate the political system and get every top job. There are, at least in principle, democratic elections and Lebanon has greater press freedom than many other countries in the region.

But Lebanon's diverse democracy has been mired in problems from day one. The country's various religious groups have repeatedly undermined one another and called on foreign allies to help them further their domestic aims. But by doing so, they themselves became proxies of more powerful foreign states such as Saudi Arabia, Syria, Iran, France and the United States.

Moreover, Lebanon's various religious groups established their own parties and patronage networks, which created a widespread system of corruption and nepotism far more nefarious than in Arab states with a single leadership structure.

Anger at the entire political class

Fueling the current protests has been a severe economic crisis and anger at government corruption, including a proposed WhatsApp tax that was instantly scrapped when Lebanon's young generation vehemently rejected the plan. Meanwhile, the unrest has grown into a broad protest movement targeting the country's entire political class.

Hundreds of thousand of people in the streets of Beirut and other Lebanese cities have been chanting "the people want to bring down the regime" — a slogan that was popularized during the Arab Spring between 2011 and 2012. Many people in Lebanon consider their politicians, irrespective of their religion, to be thieves and crooks and want them all to step down.

Lebanese people rallying behind single cause

The fact that many Lebanese people are now overcoming their religious and political differences to rally behind a single cause is certainly promising. This bodes well for the future and should be supported by the Europeans and others, too. But one must also be cautious as none of the protesters have a clear vision for what kind of a country they want once their despised leaders are gone. They have no specific plan for remodeling their political system and weeding out corruption while still ensuring Lebanon's diverse communities enjoy the protection they do today.

And we know from experience that, in a worst-case scenario, just one violent attack or ill-chosen statement or staged political intrigue can be enough to undo this momentum and pit the Lebanese people against each other. This must not happen again! That's why everyone, above all the state's security personnel, should vow to remain nonviolent. And the protesters would be well advised to carefully examine and review the government's recent economic reforms and propose specific demands instead of calling for Lebanon's political system to be abolished.