Anger at Lebanon's ruling elites is spilling onto streets across the country. For a second day, tens of thousands called for the government to fall over corruption, a collapsing economy and poor services. 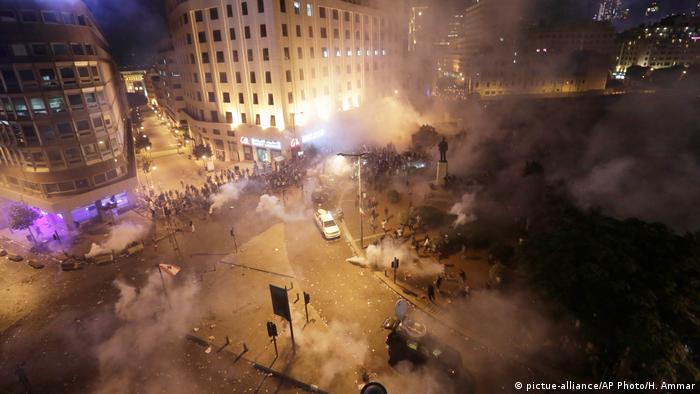 Tens of thousands of people across Lebanon poured onto the streets on Friday, on the second day of mass protests against the ruling elite, whom demonstrators accuse of looting the country into economic collapse.

In an address to the nation, Prime Minister Saad al-Hariri, who leads a national unity government that includes rival Hezbollah, blamed his political opponents for blocking reforms to resolve the economic crisis. He issued a 72-hour deadline for them to cooperate, hinting that otherwise he may resign.

The boiling public anger has crossed sectarian and political lines, targeting top leaders including the president, prime minister and parliament speaker, whom protesters blame for years of corruption and economic mismanagement. No political leader, Muslim or Christian, has been spared the protesters' outrage.

In Beirut, DW's Diana Hodali said protesters were holding only Lebanese flags and not party flags.

"They are united in their plight for better living conditions," she said.

Shortly after Hariri's speech, groups of rioters in the capital, Beirut, separated from peaceful protesters and clashed with police as they ignited cars and broke store windows.

Elsewhere, the city was shut down as roads were blocked and garbage set aflame in the streets. Access to Beirut's international airport was cut off. Shops, banks and schools were closed.

Similar scenes were witnessed in towns across the country.

The protests, triggered in part by a $6 a month tax on Whatsapp voice calls that the government quickly withdrew in the face of resistance, reflect broader disenchantment that has morphed into calls for the government to step down.

Some protesters shouted "Revolution!" and "The people want to bring down the regime," echoing chants from the Arab Spring protests, which brought turmoil to most of the Middle East and North Africa.

Lebanon's economy is in freefall and has one of the highest debt loads in the world. Garbage piles up in the streets, power cuts are common, services are lacking and employers are unable to pay employees.

"Nothing works here. We have neither enough electricity nor enough jobs. They want a 15% tax from my already low salary," one protester who did not want to be named told DW. "They should increase the taxes of the rich in this country."

"For the past four months my husband has received only half of his salary," said Kholoud Hussein, who lives in a Palestinian refugee camp in south Beirut. "How should we live off that?"

Tensions have been mounting for months, as the government searched for ways to use taxation to manage the country's economic crisis and soaring debt.

The crisis has been exacerbated by the years of regional turmoil and an influx since 2011 of 1.5 million Syrian refugees, representing about a quarter of the country's population.

Having witnessed the outcome of political violence in other countries in the wake of the Arab Spring protests, many Lebanese remain wary of unrest given the country's 15-year sectarian civil war, which ended in 1990.

Many Syrian refugees in Lebanon feel their situation is so dire that they are considering heading back to war-torn Syria. But it's a journey into the unknown, as Diana Hodali reports from Beirut. (29.04.2019)

Prime Minister Saad Hariri reportedly transferred millions of his fortune to a South African model. As the country suffers under austerity and spiraling public debt, could the revelations topple the billionaire leader? (02.10.2019)