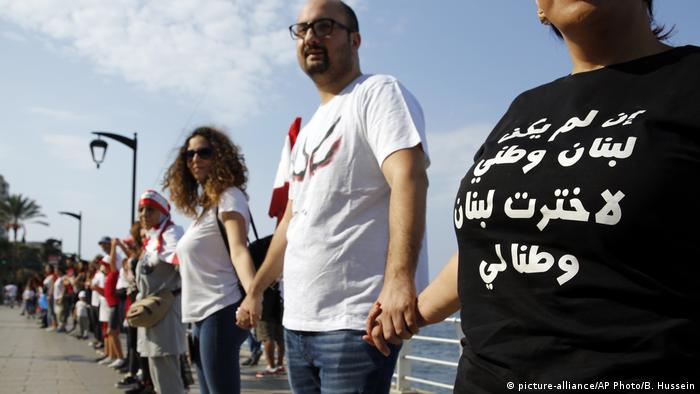 Anti-government demonstrators in Lebanon created a human chain running across the entire country from the north to the south on Sunday, with members of all religious communities in the Middle Eastern nation taking part to show solidarity.

One of the organizers, 31-year-old history professor Julie Tegho Bou Nassif, said the event was a success.

"The idea behind this human chain is to show an image of a Lebanon which, from north to south, rejects any sectarian affiliation," she told the AFP news agency.

The chain spanned some 170 kilometers (105 miles), connecting the northern city of Tripoli, the capital, Beirut, and the southern city of Tyre along the country's main highway.

"There is no political demand today; we only want to send a message by simply holding hands under the Lebanese flag," Bou Nassif added.

Lebanon is home to Christians, Sunni Muslims, Shiite Muslims, and Druze, with a political system that aims to share power between various factions. Last week, however, the government's attempt to impose a tax on WhatsApp calls triggered an outburst of anger that swelled into anti-government demonstrations and transcended long-running religious divisions.

The protesters have blocked roads and clashed with police, forcing schools, universities and banks to cease operations. On Friday, the army fired at a group of protesters blocking a road in Tripoli, injuring at least six people.

Faced with the unrest, the government walked back the planned controversial tax and proposed economic reforms, but the efforts did little to appease the protesters. Government critics have since accused the Cabinet of corruption and incompetence and demanded an overhaul of the entire political system.

'People in Lebanon want to live in dignity'

Ziad Saab was once a fighter in the Lebanese civil war. Today, he stands shoulder to shoulder with the demonstrators in Beirut. He says a new electoral law would help to overcome the divisions in Lebanese society. (27.10.2019)