Lebanese President Michel Aoun urged protesters to back proposed economic reforms and said he was ready to hear their demands. Still, the unprecedented anti-corruption protests seem set to continue. 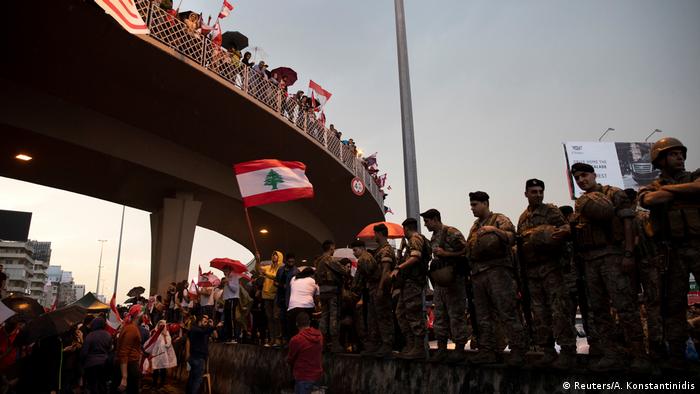 Lebanese President Michel Aoun addressed the nation on Thursday after more than a week of failed attempts to quell massive protests in the country.

In a televised speech, Aoun called on the demonstrators to back the plan of economic reforms that the government unveiled earlier this week, saying it was a "first step to implement reforms in Lebanon."

He also said he was "prepared to meet with representatives of the protesters and hear their demands."

The president also hinted that a government reshuffle was an option.

'We need acts, not poetry'

"Sorry, but the president did not convince me... We need acts not poetry," said a protester in Beirut.

The leader of the country's Druze community, one of multiple communities living in multireligious Lebanon, said the best solution would be a cabinet reshuffle followed by a parliamentary vote.

The protests started on Thursday last week after the government tried to introduce a tax for users of messaging apps such as WhatsApp in an attempt to raise revenue. The protests have since morphed into a week-long, country-wide, united movement against a corrupt political system that has pushed the economy to the point of collapse. Many protesters are demanding the resignation of the unity government, which is supported by nearly all of Lebanon's major political parties.

How effective are the protests?

Hundreds of thousands of people have blocked main roads and intersections in the country's largest protests in more than 15 years. Schools, universities, banks and government institutions have been closed for the past week. The protests have managed to cut off the capital from the Bekaa region, leading to some shortages in foodstuffs and fruits and vegetables. Protesters have been firm in their attempts to avoid partisan movements, eschewing political and religious symbols.

How has the army responded?

There have been relatively minor scuffles with Lebanese army troops who attempted to unblock main roads in Beirut and its suburbs, and in the southern cities of Sidon and Tyre. The army remains a respected institution in the country, seen as a unifying force with many soldiers openly sympathetic to the protesters' cause.

What reforms has the government offered in response?

Prime Minister Saad al-Hariri's government unveiled an emergency reform package on Monday, including a 50% reduction in salary for current and former lawmakers and ministers, the abolition of the Ministry of Information and a number of other state institutions, and the establishment of an anti-corruption panel. Hariri also promised no new taxes would be imposed. However, protesters denounced the reforms as empty promises and are now demanding the resignation of his Cabinet. Lebanese leaders are reportedly discussing a possible government reshuffle as the next step.

Why is the economic situation so dire?

Lebanon's once-thriving economy used to enjoy a sophisticated banking sector and thriving tourism industry. But spiraling debt and donors' increasing reluctance to bail out the economy triggered an economic crisis. Lebanon has a public debt ratio of about 150% of gross domestic product, one of the worst in the world. The middle class has been largely ruined and many young people now try to emigrate to escape the economic woes. About 40% of its highly educated population is under the age of 25, but they face unemployment rates of 37%. The country's political system is structured in a way to mitigate its stark political and sectarian divisions, balancing power between different Christian groups, Sunni and Shia Muslims, as well as the Druze. But this often entrenches power and influence along sectarian lines.

What is the international response?

The British embassy in Lebanon said the "legitimate frustrations" of the protesters should be heard and reforms enacted urgently.

France also urged Beirut to carry out reforms that are required to unlock the $11 billion (€9.9 billion) in financing pledged by western donor countries and lending institutions last year.