Women are on the front lines of protests in Lebanon — and they are inspiring feminists in other Arab countries to stand up, too. The masculine ridicule has been relentless, but so has the feminist response. 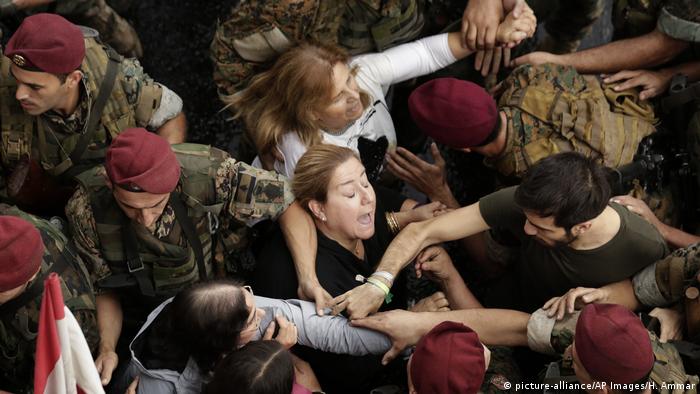 A video of the scene has been clicked and reposted tens of thousands of times on social media platforms in Lebanon and other Arab countries. According to media reports, the incident occurred on October 17. That day, a convoy of vehicles accompanying Lebanese Education Minister Akram Chehayeb got caught up in a demonstration in the center of the capital, Beirut.

As the situation grew tenser, one of the minister's bodyguards got out of the vehicle and fired his rifle into the night sky, agitating the demonstrators. That was when the young woman in the video kicked the armed bodyguard in the groin. He apparently recognized the fact that he had nothing to gain by engaging in a fight with an unarmed woman.

Read more: Illustrations against ignorance and oblivion in Lebanon

Protests in Lebanon have been raging for days — and have already led to some concessions from the government. Women are at the forefront. The video garnered many comments, most positive, some euphoric, with one user calling the protagonist "Lebanon's Lara Croft."

"All of society is interested in what is going on here," the Algeria-born sociologist Nasser Al-Jabi told DW, calling the protests peaceful and inclusive. "That could be an example for others to follow," he said.

The woman who kicked the bodyguard aside, women participating in the protests have attempted to enforce nonviolence. "There are a number of demonstrators who want to destroy public property during protests," the demonstrator Hanin Nasser told Lebanon's Daily Star newspaper. She said she and her friends were strictly against such actions. Instead, they place great stock in maintaining the peaceful face of the protests. 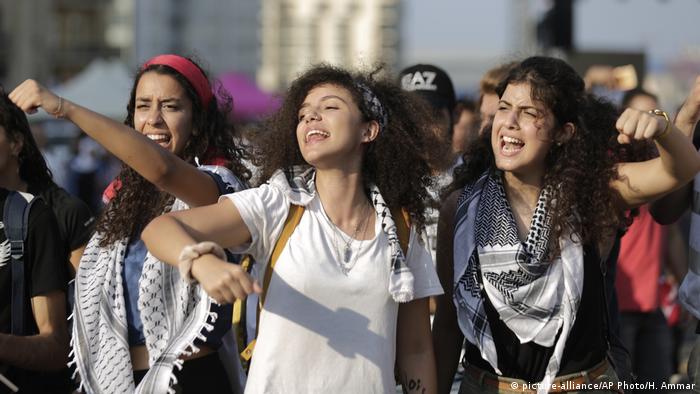 The demands that women issue through megaphones range from intensifying the fight against corruption to the resignation of Prime Minister Saad Hariri and the rest of the political establishment.

Some women have used  belly dance as the medium for their social engagement. Misogynists hace written online that they are not amused by the open and fun-loving attitudes that some women are displaying.

Many protesters wear headscarves, and many do not. That comes as little surprise in cosmopolitan Lebanon, where Sunnis, Shiites, Druze and Christians live side by side. The comparatively casual clothing that Lebanese protesters wear has led to heated discussions — but also support from women across the Middle East.

Read more: Why Isabel Allende, at 75, tries to make a difference every day

The Egyptian women's rights advocate Hend ElKholy wrote on Facebook that it was inspiring that women in Lebanon could wear shorts and walk through a group of men without getting harassed. "If anybody wants to know what masculinity is, they can see it here," she wrote. "Women feel safe in this group. Not one single man seeks to limit their freedom or to harass them — neither verbally nor physically."

ElKholy was contrasting the situation for women in Lebanon with that of women in Egypt, where they continue to face humiliation, harassment and attacks. Many who participated in Egypt's 2011 uprising were sexually assaulted by security forces — and even male protesters.

And the social media reaction from some men within Egypt seems to make ElKholy's case for her. "I was watching the protests in Lebanon, but when my wife got home I quickly changed to the channel that was covering the war in Yemen," the Egyptian billionaire Naguib Sawiris wrote on Twitter, his "joke of the day."

Many women responded that it was an expression of masculine hubris. "Think back to when there were protests in your country," the Lebanese actor Nicole Saba fired back. "Nobody was making jokes. It is strange that you like those kinds of jokes, and it is shameful."

Another pointed out that "it is wrong to turn popular protests into a punchline, but it is even worse to make jokes about women."

Many people were also extremely upset by an article in the Saudi Arabian newspaper Okaz. A report on the protests was headlined "Lebanese Beauties: All of These Wonderful Women Are Revolutionaries."

The article consisted mainly of selected photos of "attractive" protesters whom the paper described as "not only wonderful, but also revolutionary." Needless to say, the sexism upset demonstrators in Lebanon. "That is miserable journalism, one that uses the language of perverts," one Twitter user wrote, adding that "these images are a provocation and have no place in a respected newspaper."

And the struggle for women within Lebanon is intense. A law that had kept rapists from facing jail time if they promised to marry their victims had remained on the books until 2017. And in 2018 a number of women's organizations banded together to start the nationwide "Shame on Who?" campaign to raise public support for people who had reported sexual assault with the reminder to "condemn the rapist — not the victim."