Syrian women struggle to survive in exile | Middle East| News and analysis of events in the Arab world | DW | 21.12.2015

Women from Syria suffer from a myriad of abuses in the workplace and at home as they struggle to support their families following the death or abduction of the men in their family. Mat Nashed reports from Beirut. 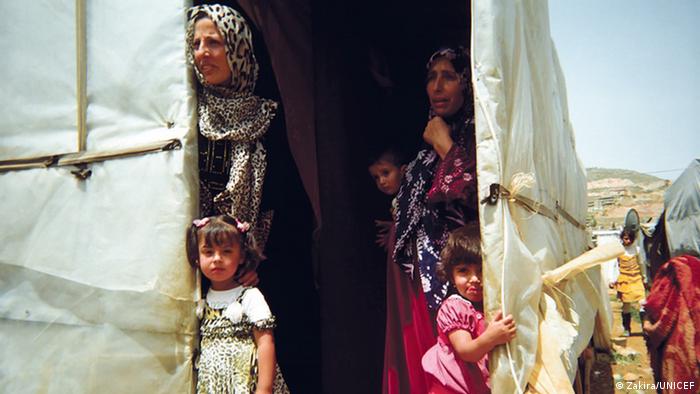 Holding her son in her arms, Nora recalled the last time she saw her husband in Syria. A 22-year-old Palestinian refugee from Yarmouk, a now devastated district on the suburbs of Damascus, she watched her husband kiss their child goodbye before going to his fabric shop.

"It was dangerous for him to work. He had to go through three regime checkpoints to get to his shop. He always said that he had to make money so we could survive," Nora, a woman with dark golden skin and a grey headscarf, told DW. "I know they [the regime] took him. I know, because he always promised to come back to us."

Nora's husband disappeared on June 24, 2013, a month before the regime imposed a brutal siege on Yarmouk that trapped and starved thousands of civilians. She fled two years later to Shatila refugee camp, a destitute Palestinian enclave in the southern suburbs of Beirut.

She is now one of thousands of refugee women struggling to provide for her household, alone. According to the UN refugee agency UNHCR, nearly one in four women from Syria have been forced to do so following the death or disappearance of their husband. And while some have persevered, most have suffered from sexual abuse, exploitation and depression. 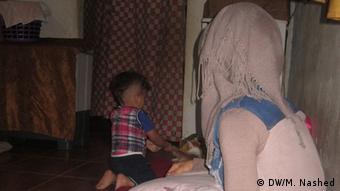 Nora fled to Lebanon after her husband disappeared

Randa Haddad, a social worker for Najdeh, a local NGO in Lebanon dedicated to helping women in the Palestinian camps, areas where many Syrians have also taken refuge, said that widowed women who enter the workforce are very susceptible to sexual harassment, especially if an employer discovers she doesn't have a father, husband or brother behind her.

"Syrian women working in Lebanon suffer from discrimination because of their gender and their nationality," said Haddad. "Those without husbands are obliged to work, and many are doing so for the first time. But if their boss finds out that they don't have a man in their life then he might try to sexually abuse or blackmail her."

Nora, for one, says she worked in a yogurt and cheese factory when she came to Lebanon, but soon quit because of how men would behave around her. "They [male colleagues] stared at me every second," said Nora. "I felt afraid. I felt they were going to touch me at any time."

Had Nora been sexually assaulted, lack of legal status would have deterred her from seeking help from authorities. In Lebanon, most Syrian refugees reside without legal papers due to rigorous and sometimes impossible visa renewal requirements.

To protect themselves in the workplace, some women lie to their employers to convince them they do have a man in their home.

The loss of a father figure has also complicated family dynamics in households where notions of conventional gender roles remain typically strong. Haddad says that in some broken families, the eldest son may feel pressured to assume the role of his father by abusing and controlling the women in his family.

"We have faced cases where boys begin beating their mother because they think that this is the way to assume the role as 'the man in the family,'" said Haddad.

Women pushed to work have also expressed fear of losing their "femininity," resulting in depression and anxiety. Some starve themselves in the hopes of ensuring their children have enough food. Those unable to work may resort to even more desperate measures.

Roula El-Masri, a social worker with ABAAD, a Lebanese NGO that engages men to stop violence against women, says that many widowed women push their children to perform child labor or marry their daughters off to collect their muqaddam, a sort of dowry that the groom provides to the bride's family. And while early marriages are a common practice in some parts of the region - especially in households coping with extreme poverty and war - El-Masri says that ruptured families are more likely to give their daughters away sooner.

"Early marriage is a cultural coping mechanism, so of course families in precarious situations may turn to that 'solution' sooner," said El-Masri.

Yet according to a report released by Save the Children last year, widowed mothers are much more reluctant to do so. Umm Nada, a 43-year-old Palestinian mother from Syria, says she came to Shatila with her three daughters after her eldest son disappeared. Working as a cleaner for a domestic NGO, she has refused seven requests from men wanting to marry her 15-year-old daughter in the last two years. 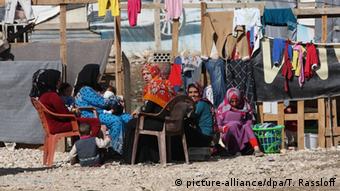 Many women find it hard to cope with their new circumstances

"I'm not going to give her up," said Umm Nada, as she poured a cup of Arabic coffee for her youngest daughter. "I'll make sure that we survive. We'll be okay if we just stay together."

Manar, a Palestinian social worker in Shatila, says Umm Nada has not only assumed the role of the breadwinner in the family, but she's also remained emotionally present for her daughters.

"Umm Nada has become the father, mother, sister and best friend for her daughters," said Manar. "She has become their everything."

Nevertheless, most women have found it difficult to head their household under such precarious circumstances. Some have even prostituted themselves for money and aid. Despite exploitation and abuse, the greatest battle for many is coming to terms with the loss of their husband or children.

Staring at her fingers, Nora says she sold her wedding ring for $100 to feed her son. She now has little left to remind her of life before the war. Confined to the darkness of her home, she often tells her son stories about his father and the once bustling district of Yarmouk.

"I feel empty without him," said Nora, tilting her head down. "I miss how he used to play with our baby."

The number of people forced to flee war, violence and persecution in 2015 is set to soar past last year's record of nearly 60 million, the UN has said. One in every 122 people has been forced to flee their home. (18.12.2015)