The military has admitted that it used "excessive force" against demonstrators amid clashes in Baghdad. The violence claimed several lives of protesters who are calling for the government to do more to help the poor. 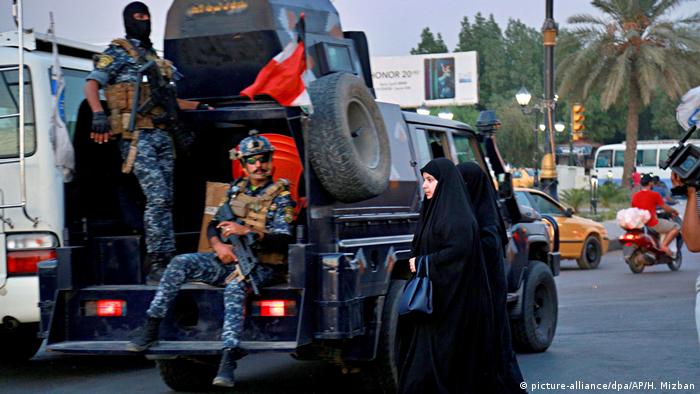 On Monday Iraq's military admitted to using "excessive force outside the rules of engagement" to counter the protests from the day before. It was the first time since protests began on October 2 that the security forces acknowledged the severity of their response to the protests.

At least 15 people were killed in clashes between police and protesters in Baghdad on Sunday, medical and security sources said.

Military troops had blocked the main road leading from Sadr City to Baghdad's central Tahrir Square. They reportedly fired at the protesters to suppress them. Protesters burned tires and launched fireworks at the police.

The latest clashes follow days of apparently spontaneous unrest, with Iraqi citizens expressing their frustration over poverty and corruption in the country. On Sunday, the government said that over 100 people, including several members of the security forces, have been killed since the anti-government protests first started last week. More than 6,000 more have been wounded, according to the officials.

However, Iraqi Interior Ministry spokesman Saad Maan had denied that police and military troops had directly targeted the citizens. Instead, he said that "malicious hands" were targeting both the protesters and the security members.

"Security forces did all they could to preserve the safety of the protesters and security personnel," Maan said. "We express our deep regret over the bloodshed."

The Iraqi government is worried about political fallout, with protesters backed by powerful cleric Muqtada al-Sadr. The Shiite cleric, who controls the largest bloc in Iraq's parliament, has already sided with protesters and called for Prime Minister Adel Abdul-Mahdi to resign.

On Monday morning Abdul-Mahdi predicted a "return to normal life" in a phone call with US Secretary of State Mike Pompeo.

A statement from Pompeo's office said that the prime minister had "confirmed that security forces had resumed control and stability had been restored."

"I will go and meet them without weapons and sit with them for hours to listen to their demands," he said on Saturday.

He also introduced a series of 17 measures to appease the protesters, such as boosting welfare and unemployment benefits, providing subsidized housing and land, and creating new jobs. According to Abdul-Mahdi, people killed in the unrest would be designated as "martyrs", making them eligible for state benefits.

While the Saturday pledge failed to stop the violence, the latest protests saw fewer people take to the streets compared to previous days.

"There is no justification for the use of live bullets against peaceful demonstrators," commission's chief Aqeel al-Musawi said.