Anti-government protesters have taken to the streets after authorities lifted a two-day round-the-clock curfew. Nearly 100 people have been killed after four days of mass protests in Baghdad and other Iraqi cities. 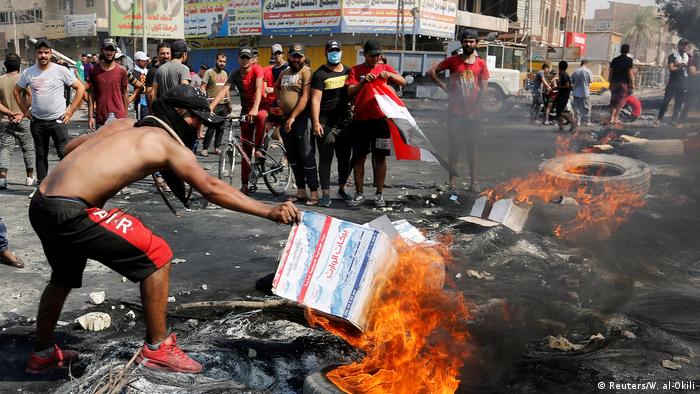 At least five people have been killed and dozens wounded on Saturday as security forces opened fire at anti-government protesters in Baghdad.

The protests restarted after the government lifted a curfew in the capital and other southern Iraqi cities.

Protesters — many of them university students — are angry over rising unemployment and poor public services, and are demanding an end to official corruption and a change of government.

At least 93 people have been killed and nearly 4,000 injured in four days of clashes between protesters and security forces, according to Iraq's Human Rights Commission.

Jeanine Hennis-Plasschaert, the top UN official in Iraq, has condemned the violence, saying "this must stop."

"Five days of reported deaths and injuries; this must stop," she said in a tweet on Saturday.

The UN official said she was "deeply saddened by the senseless loss of life."

"I call on all parties to pause and reflect. Those responsible for violence should be held to account. Let the spirit of unity prevail across Iraq," she said.

The rallies that started on Tuesday took Iraqi authorities by surprise. Experts have dubbed them "the most serious challenge" to the government since the defeat of the "Islamic State" (IS) militant group two years ago.

In a speech on Friday, Iraqi Prime Minister Adel Abdul-Mahdi said the calls by protesters to put an end to government corruption are justified, as he tried to restore calm after days of civil unrest.

"Your demands for reforms and the fight against corruption have reached us," he said.

"Demands to fight corruption and concern for the future of young people are rightful demands and we will respond to every legitimate request," he added, promising that his government would not make "empty promises."

At the same time, he used his televised address to call on protesters not to follow any "advocates of despair" and not to allow peaceful protests to turn violent.

Anger against all politicians

The Iraqi parliament was due to meet on Saturday, but firebrand cleric Moqtada al-Sadr's bloc of 54 lawmakers and other factions boycotted the session.

Al-Sadr, a former militia leader, threw his weight behind the demonstrations on Friday, supporting the calls for Abdul-Mahdi's resignation.

But many young protesters insist their movement is not linked to any politician or a religious group.

"These men don't represent us. We don't want parties anymore. We don't want anyone to speak in our name," one protester told AFP news agency late Friday.

"If living conditions don't improve, the protests will come back even worse," Abu Salah, a 70-year-old resident of Baghdad, told AFP.

In an apparent concession to protesters, a governmental anti-corruption body, the Higher Council for Corruption Combat, has ordered the dismissal of 1,000 employees at state institutions who have been convicted of wasting or embezzling public money, according to the official INA news agency.

Abdul-Mahdi also pledged to try and pass a law granting a basic income to poor families, while admitting that there was no "magic solution" to the graft and poor governance rampant in the country.

According to the World Bank, the country has a youth unemployment of around 25%. Iraq is ranked as the 12th most corrupt country in the world by Transparency International.

Abdul-Mahdi's government, which has been in office for a year, has failed to bring stability and order to the war-ravaged country as it grapples with the problems posed by an ongoing terrorist campaign by the extremist IS group. Iraq declared victory over the group in 2017, but it continues to be active in parts of the country.

The civil unrest has endured for a third day across the country. Protesters were venting their fury at Prime Minister Adel Abdul-Mahdi's government, despite a massive security operation aimed at quelling the rebellion. (03.10.2019)