What's behind the protests in Iraq?

Crisis-ridden Iraq has been plagued by violent protests that have left dozens dead. Anger over living conditions in the country shows no sign of abating, but what exactly is fueling it? 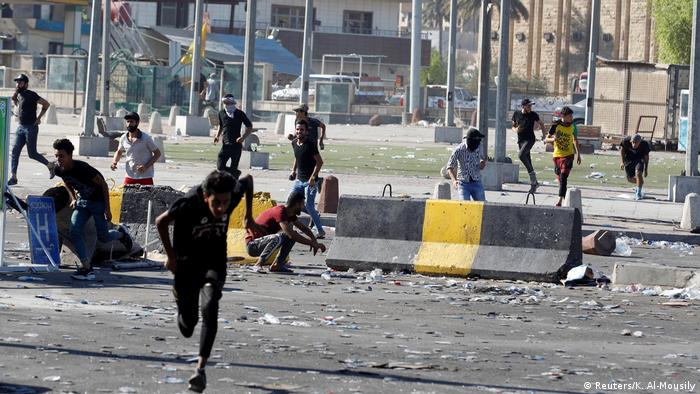 How did the protests begin and what do demonstrators want?

The protests in Iraq did not exactly come as a surprise. Last year, a wave of protests washed over the country as well, hitting the southern city of Basra, for instance, the hub of Iraq's oil industry. Those protests were sparked when thousands of Iraqis fell ill from drinking contaminated water.

This time, the protests appear to be more spontaneous in nature. Nevertheless, they seem to have been touched off, in part, by the firing of Abdul-Wahab al-Saadi, a popular general who previously served as second-in-command of Iraq's counterterrorism service. Al-Saadi was an important figure in the fight against the self-proclaimed "Islamic State" (IS) terror group. Recently he was transferred to another post.

His supporters are convinced he was ousted because he was standing up to Shia militia groups within the Iraqi army. Those groups are said to have close ties to neighboring Iran. Al-Saadi's face was seen on a large number of protest placards over the past few days, a sign the protests are also aimed at Iranian influence in Iraq.

Still, social frustration is the primary force behind the protests. Experts have long warned of an explosion of discontent, especially among Iraq's youth, which has been crushed under the weight of unemployment. Daniel Gerlach, editor-in-chief of the German Middle East magazine Zenith, said the grounds are as follows: Lack of energy, lack of public services, high unemployment, poverty and corruption.

"Iraqis have the feeling that the government is involved in every aspect of life — and that although some people are getting rich while the country develops, average citizens are entirely underprivileged," he said.

That phenomenon can be seen clearly in Baghdad's Green Zone, where everyday citizens are prohibited from entering certain areas. "That frustrates people," said Gerlach. At the moment, the protests are dominated by calls for the end of maladministration and corruption. Yet, the agenda could quickly shift in the face of escalating violence.

How can an oil-rich country like Iraq suffer poverty and power outages?

Iraq is one of the world's largest oil producers. The economy is largely dependent upon oil — generally a lucrative sector, as can be seen in the neighboring Gulf States.

But Middle East expert Gerlach explains corruption is mainly to blame for the fact that many Iraqis live in poverty and are forced to suffer power outages in the summer — when temperatures regularly climb as high as 50 degrees Celsius (122 degrees Fahrenheit). According to a recent anti-corruption index published by Transparency International, Iraq won the ignominious distinction of being ranked 168 of 180 worldwide, making it one of the most corrupt countries in the world.

Gerlach said the situation is made worse by the fact that "in Iraq we see a phenomenon in which the people are the supplicants and the state is the benefactor." He sees a democratic deficit in the ethnically and religiously pluralistic society, and said the country is suffering under the favoritism of those who happen to control the complex ruling system at any given time. In that system, political leaders from different political, religious or regional groups often take control of the country's resources and then either keep them for themselves or dole out the profits to their supporters. In the end, desperately needed revenues for health care and other public services are nowhere to be found.

How are politicians and religious leaders reacting to the situation?

Despite escalating violence, Iraqi Prime Minister Abdel Abdul-Mahdi has attempted to calm the situation. In a televised address to the Iraqi people on Thursday night he explained that the protests were not without grounds, promising that his government was working to find solutions. However, he cautioned that there is no "magic formula" to solve all of the country's problems.

Still, the government had previously taken a tough stance in order to get a grip on the situation: Curfews, for instance, were issued in Baghdad, as well as in the cities of Nasiriya, Amarah and Hillah. It also shut down the internet across the country — except in the Kurdish north — to keep demonstrators from organizing on social media platforms. 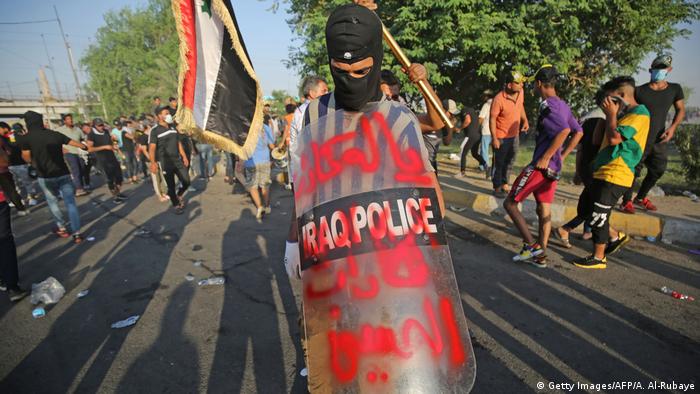 Despite that, Friday saw another round of protests in places like Baghdad, which was the scene of violent clashes. The number of dead and injured continued to climb throughout the course of the day. Gerlach said one reason for the escalating violence is a lack of training for Iraqi security forces. "Iraq's security forces are not trained to deal with mass protests," he said. Rather, they are trained to fight terrorists or well-armed rebels.

Grand Ayatollah Ali al-Sistani, the country's most important Shia leader, has called on politicians to enact "serious reforms" before it is too late, while also admonishing all violence — that perpetrated by security forces as well as by protesters.

The reaction from the influential Shia cleric and politician Muqtada al-Sadr was harsher in tone. He called for representatives to boycott parliament until the government presented reforms that could be accepted by the people.

What role do interdenominational tensions and neighboring Iran play?

Thus far, the protests have taken place in those Iraqi cities and regions with Shia majorities. To date, Sunnis and Kurds have played no role, nor have interdenominational tensions. Most signs indicate a conflict within the majority Shia population, which also exhibits pro- and anti-Iranian tendencies.

Although a number of anti-Iran placards have been seen at demonstrations, protests remain primarily focused on the social issues of poverty, corruption and maladministration. There have also been differences of opinion over the question of whether Iran has a hand in the current situation.

Some media outlets have reported claims that Iraqi security forces spoke Farsi — the mother tongue of Iran — while violently suppressing protests. Evidence thereof, however, has yet to be seen. Gerlach said that unless he sees persuasive evidence to the contrary, the idea that Iran is involved in the protests "is not a credible theory."

Mosul's Jewish quarter miraculously survived three years of occupation by the "Islamic State" terror group and the battle to evict it. Reporter Judit Neurink and photographer Eddy van Wessel went there to find out how. (14.04.2019)