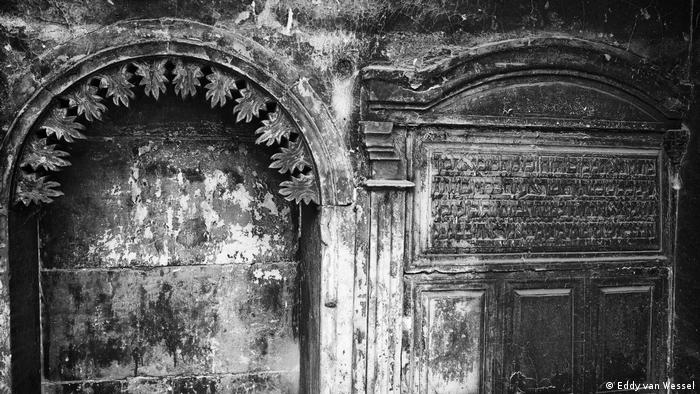 When the Islamic militants of IS were finally routed from the city, most of western Mosul was left in ruins. But not the Jewish quarter. Here too, people are working to restore their houses. However, these are mostly still standing and mainly need repairs and a coat of paint to erase the traces of three years of occupation. While most residents fled the battle to free their neighborhoods of IS, they are now back.

Seventy-two-year-old Imad Fetah, who stands in front of his freshly painted gate, wearing a spotless white dishdasha, a scarf draped over his head, never left..

As he recounts the events of the years of occupation, he points to the blackened remains of a building across the narrow street. The fire was started by IS, he says, after the inhabitants had been ordered to leave. The house, which was built around a covered courtyard in the traditional Mosul style, is badly damaged but can still be restored.

When people realized what IS intended to do to their homes, they started refusing to leave. Fetah stayed put, too. "Daesh destroys old things," he says sadly, using the local name for IS. It wasn't only this neighborhood — every monument that did not fit with their strict version of Islam had to go: statues of poets and writers, Sufi places of worship, libraries with unique book collections.

The Islamic militants would only tolerate the things they had a use for, Fetah states. "Like the tunnels in our quarter which the Jews had dug." The tunnels were built to give the residents an escape route in case of danger. Until the IS takeover, they were likely last used when anti-Jewish riots erupted after the declaration of the state of Israel in 1948.

Most Iraqi Jews then fled the country, and their neighborhoods emptied. Their houses were popular because of the high quality of their construction. But many were neglected in the ensuing years, and the areas gradually changed into slums. 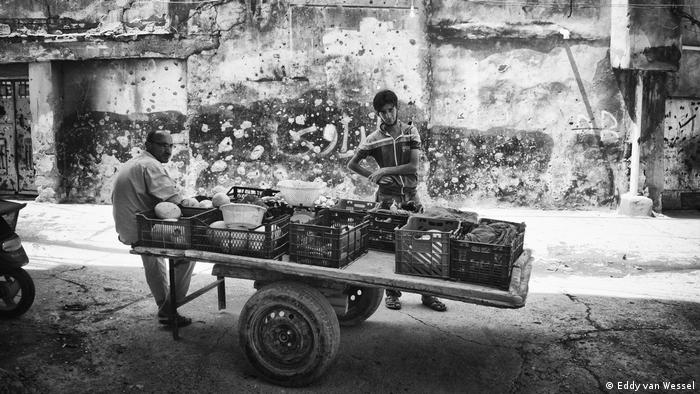 Still, says Imad Fetah, he has lived here happily for many years. All his neighbors are aware of the Jewish history, and they are even proud to live here. In the small supermarket that reopened in the nearby bazaar street, 62-year-old Younis Abdullah confirms this. "My parents bought our home in 1948 from a Jewish family. My 90-year-old mother fondly recounts how she liked our Jewish neighbors and misses them."

In Mosul Jews are mainly remembered as 'good neighbors,' says Faisal Jeber, director of the Gilgamesh Center for Antiquities and Heritage Protection, while walking through the Jewish quarter. "The negative sentiments all concern the state of Israel."

One wonders what kept civilians from telling IS about the culturally valuable houses and ruins in the Mahallat al-Yahud, the Jewish Quarter. Amazingly, it survived untouched. The biggest surprise of all is the synagogue. In the 1980s it illegally became the private property of a man who went to live on its grounds. Despite the massive destruction IS wrought in Mosul, the derelict building still stands tall.

The gate has been boarded up, and an official announcement in red letters on the wall says that trespassing is forbidden as this is a heritage site. But, because its roof is gone, a climb onto surrounding roofs makes it possible to see the synagogue's interior, with its Hebrew tablets embedded in the walls. 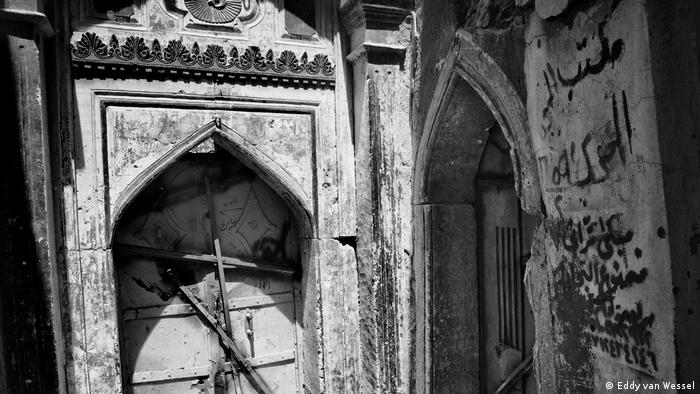 Even though IS used both the synagogue and an old school nearby to store weapons and ammunitions, three of the Hebrew tablets disappeared only after liberation, after a Mosul historian shared his happiness on Twitter that the synagogue had escaped destruction. That's why Faisal Jeber is not especially keen on the warning against trespassing, as it might inspire professional souvenir hunters.

It is a minor miracle that the neighborhood survived IS relatively unscratched. Jeber thanks the derelict state of the houses for this and asserts that the Hebrew tablets had gone undiscovered because most of the IS members in Mosul were illiterate.

But inhabitants point out that IS wanted them out of the neighborhood for the very reason that it was Jewish, and therefore considered haram, forbidden. And that it was mainly saved by its inhabitants' refusal to have their homes taken from them and burned down, however scared they may have been.

And then there is the fact that the neighborhood survived the bombings rather well compared to most of western Mosul. That seems to have been mainly thanks to the Americans. Well aware of the value of Mosul's Jewish heritage, they had marked it on their maps. 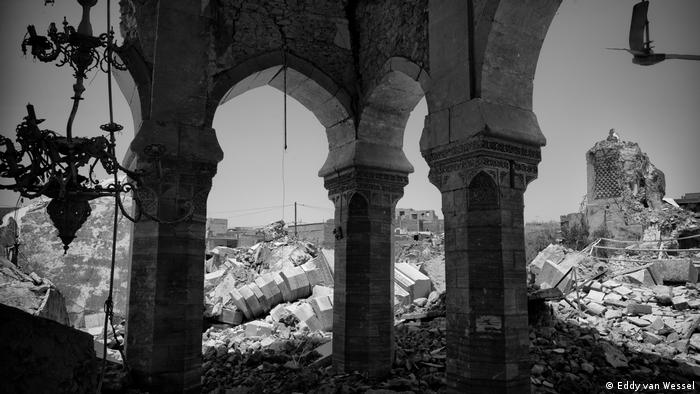 "In 2004, I saw an American officer walking through the quarters," recounts Saad Rachawi, 56, as he leads the visitors up onto his roof to look at the Jewish school opposite. IS stored weapons there, he says, which scared him badly. Elsewhere in Mosul, those schools became targets for the coalition fighting IS. But here, nothing happened — because of the American's visit 14 years ago, he thinks. "He had a map of the neighborhood and was making notes on it."

He must have been referring to Carlos C. Huerta, a rabbi with the US troops in Mosul after the fall of Saddam Hussein in 2003. In a blog, Huerta reported how he discovered the synagogue there. "My heart broke as I climbed over the garbage piles that filled the room where, for hundreds of years, the prayers of Jews had reached the heavens. I realized I was probably the first Jew to enter this holy place in over 50 years." The garbage is still there

Last year Saad Rachawi once again saw Americans near his house, when they came to the school after IS had been expelled from Mosul. "They used robots to remove all those explosives."

Now that IS no longer poses a threat, new ones have appeared. Even though housing prices have fallen by 50 percent, owners are having to sell their properties for lack of money after having survived IS rule. Faisal Jeber fears that bargain hunters will buy the houses in order to demolish them, rebuild and make a profit. Important heritage will be lost, he warns.

His fears center on the synagogue, which has been put on the market for $2 million (€1.8 million). The amount is far too high, Jeber says. "We want to buy the premises, or even rent them, to base our headquarters there. We're looking for funding, so we can return the building to the community." At the same time, he is considering starting legal proceedings in the courts, as the synagogue was government property and should never had been sold to a private owner. 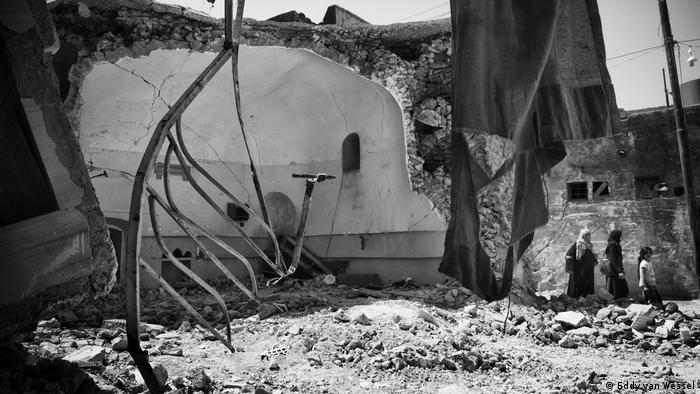 Jeber's dream is to return the derelict quarter to its former glory. "That would be important for raising awareness that the Jewish quarter is an inseparable part of Mosul. For a long time, people tried to erase the Jews from our history. But it is our heritage, our identity and our true history."

Yet as if to illustrate the difficulty of his plight, soon after the interview, and after showing an Iraqi Jew living abroad around in Mosul, Jeber was picked up by Iraqi security police for allegedly spying for Israel and interrogated for over two months. Finally the charges against him were dropped. It shows how deeply the distrust of Jews is rooted in Iraqi society.

Jeber has since left the city.

The city of Derik in Kurdish northern Syria is struggling to overcome eight years of war. It's getting help from an unlikely source: the multicultural, hipster Berlin neighborhood of Kreuzberg. (14.03.2019)

Syria's cultural heritage before and after the war

The Syrian Heritage Archive Project in Berlin collects photos of Syria before and after the country's civil war. The pictures are now on show at an exhibition at the Pergamon Museum. (28.02.2019)