Music is back in Mosul, as are books and paintings. With the "Islamic State" group gone, locals are enjoying their newfound freedom and embracing culture. Will it last? Judit Neurink reports from Mosul. 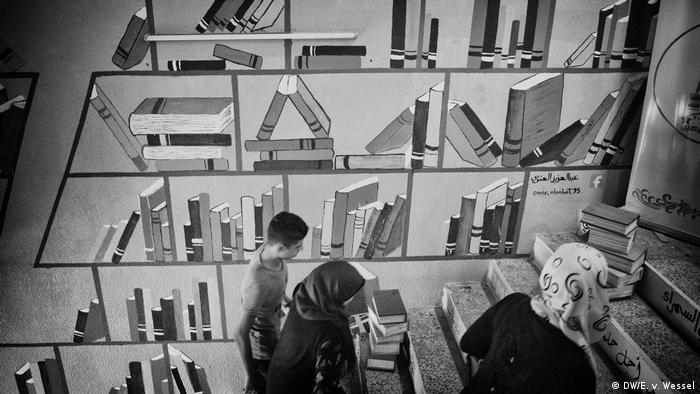 In the park in Mosul where the "Islamic State" (IS) once trained child soldiers, thousands have now gathered for a book festival with plays, music and tables full of books donated to the people of the city. Culture is back with a bang in Iraq's second city, and the "I am Iraqi — I read" festival is just one of many cultural events. The slogan refers to the traditional Arab saying: "Egypt writes, Lebanon publishes, and Iraq reads."

"We don't value things until we lose them," says Ali al-Baroodi, an English teacher at Mosul University who has become the city's unofficial chronicler, cycling around his liberated hometown taking pictures of the damage and the rebuilding process. "Last year's liberation of eastern Mosul from Daesh was like a second birthday for me."

Arts and culture suffered badly under IS, or Daesh [the group's Arab acronym]. Statues of poets and writers were torn down, works of arts and musical instruments were also destroyed, and the university library burned along with many valuable books. Books were banned, non-religious art was taboo, musicians and artists were killed.

And not just by IS. The repression began soon after the US invasion in 2003, when radical Muslims began to gain more and more ground in the city. "IS is like a ghost — you don't see it, but it's there, secretly collecting data on us for when they return," al-Baroodi told DW. "They ruled in the shadows from 2005, and openly after 2014. It is not easy to end their existence. Under Daesh, I died 1,000 times a day. So the first thing Mosul needs to do is lose its fear."

And while his father keeps warning him to be more careful, the young photographer feels it's his mission to record developments in his city. He compares the situation to the first years after 2003, when the Iraqis celebrated the change and the freedom they had longed for — until Muslim radicals appeared on the scene to fight the Americans, putting a rude end to the positive changes. But this time, many in Mosul feel that the change process must be allowed to continue.

'Better than before IS'

Marwan Tariq, who teaches at Mosul University's Arts Institute, agrees that progress has been made: "After Daesh, the situation is already better than before they arrived."

Tariq was one of the first to enter the badly-bombed university campus after IS was chased out early last year. The damage to the Arts Institute was terrible. "Everything that had a connection to art was broken. Pianos, ouds, guitars, but also paintings and sculptures," he told DW.

Together with his students he started to clean up the buildings that were still standing — without any support from the Iraqi government, which continues to treat anyone who stayed during the occupation with suspicion for possibly having collaborated with IS. At the same time, locals are still afraid of those IS members who went underground.

"That's why you hardly see anything relating to the occupation in the arts now," Tariq said.

And the arts do not seem to be playing a role in helping people come to terms with what happened to them under IS, in contrast to the Kurdistan region of Iraq, where, for instance, a Yazidi artist has created paintings about the fate of his people.

Artists in Mosul found other ways to celebrate their renewed freedom. In May 2017, when the battle was still raging across the river Tigris, which divides the city in two, both al-Baroodi and Tariq were involved in staging an art exhibition in eastern Mosul. There, pictures and paintings were exhibited against the blackened remains of a university building to the sounds of long-banned music.

And then there was the action by students, teachers and volunteers to save the books that had survived the fire in the university library.

Books and music return to Mosul 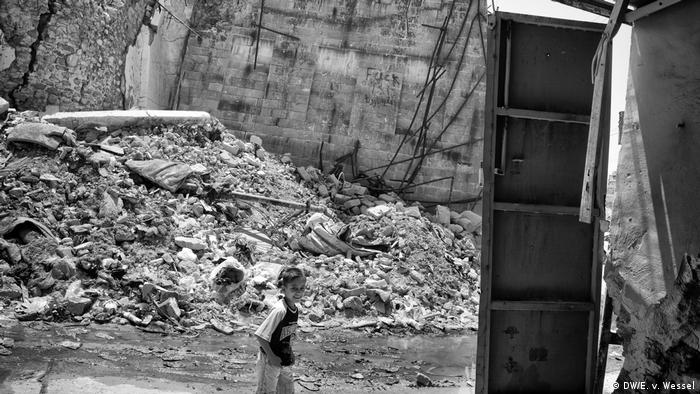 "Islamic State" left behind a trail of destruction, but the city is gradually coming back to life

In the wake of the fire at the university's library, al-Baroodi, along with students and other volunteers, was there to document the salvaging of some 6,000 books from the ashes. Thousands of books would later arrive from abroad to replace those that were lost, thanks to an appeal by historian Omar Mohammed, who had garnered international attention for his work as the Mosul Eye blogger during the occupation.

Music has returned, too, with an oud player giving a concert at the art exhibition and a bass player performing at damaged heritage sites, like the Nouri Mosque with its famous Hadba minaret where IS leader Abu Bakr al-Baghdadi declared the Caliphate, which IS destroyed when they were forced out of the city.

Music also features prominently at the book café, the first one ever opened recently in Mosul. There, Fahad Sabah and his business partner Harith Yassin offer a platform for concerts and weekly debates about literature, and a quiet place for young and old, men and women, to read or work, enjoying a cup of coffee or tea. Sabah proudly announces that they are selling Shiite books now, too — another taboo broken in the conservative Sunni city.

Cultural comeback still at the beginning 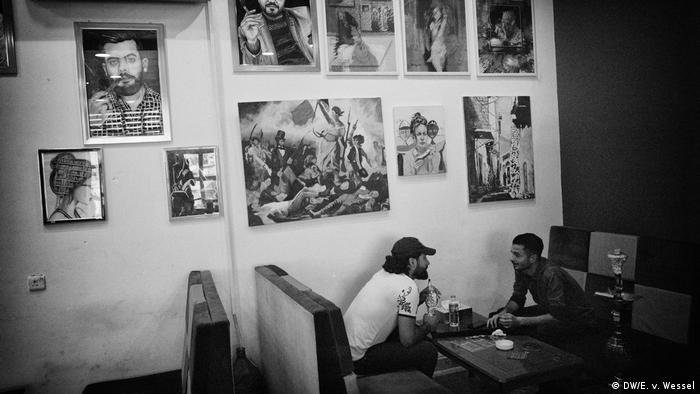 In the café, where neatly stacked book cases and portraits of writers, musicians and artists contribute to the atmosphere, Sabah agrees that culture has returned to Mosul. "Even before Daesh, debate was impossible for fear of the extremists and their threats. Now society is far more open. Our place is just one example. Look at what we do and who comes in here. We run the first public space where both men and women feel at home," he told DW.

He recounts how long segregation of the sexes has existed in the city. "Until the 1980s, the cinemas were still mixed. But then came the radicalization of society and village culture went into a downward spiral."

Sabah wants to work hard to avoid the mistakes that were made after 2003 and build on the new openness — even though it's estimated that at least a fifth of Mosul's inhabitants agreed with IS ideology, if not the way it applied it. "That's why we have to understand our problems and our boundaries. That's the first step toward a solution. It won't be easy, so we will have to work hard."