The "Islamic State" group was able to conquer Iraq's second-largest city in June 2014 because it had supporters inside Mosul. How do victims and perpetrators live together today? An appraisal a year after liberation. 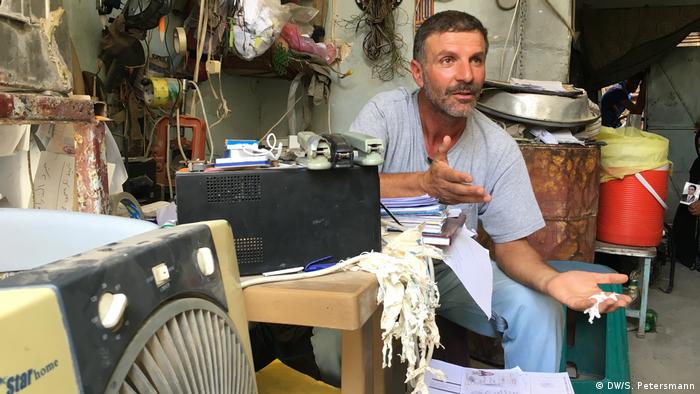 No time for ceremony. No formalities. The first question not yet asked. "The IS problem will last another 100 years," Ahmed Mohammed Abdulrahman says in his big, booming voice. The 46-year-old has big hands, too. As he talks, he draws patterns in the air in his ramshackle office. Abdulrahman has met foreign journalists before and he clearly enjoys the attention. He's the mukhtar: the elected neighborhood mayor in the Hamam Manqush district. It belongs to the old walled town of war-ravaged western Mosul, where the "Islamic State" (IS) had its last stand.

"Children from IS families and children from other families are constantly fighting with each other. Without reason. They just fight. And they blame each other all the time. The more IS families want to come home, the more problems we face," he says. "Maybe a soccer stadium would be a good idea so that the kids can get rid of their energy in a good way."

The neighborhood of Hamam Manqush in Mosul's Old Town is close to the bombed-out al-Nuri mosque. It was from here that Abu Bakr al-Baghdadi, the head of the IS, proclaimed his murderous "caliphate" in June 2014. Today both the mosque and the neighborhood are in ruins, although, miraculously, the building's green dome was left unscathed.

After last summer's final battle, someone climbed up and scrawled "F*** IS" onto the dome. The same message can be found in the narrow alleys of Hamam Manqush. Here, someone has sprayed "IS — we want your blood" on a wall. In red letters. 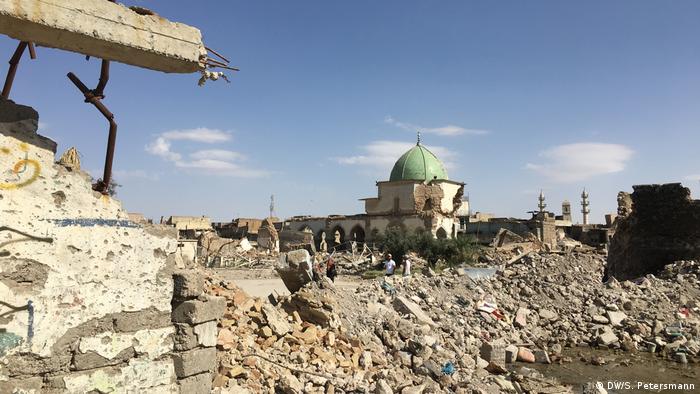 Before the war, some 400 families lived in this area. About half of them supported IS, says Abdulrahman, a tailor by profession. He and his family stayed until the very end. "Life was infinitely hard," he recalls. "People died of bombs, of bullets, of hunger." He shakes his head. "The IS fighters fired shots at airplanes. They were sick in the head. They picked people out randomly."

IS fighters used civilians as human shields. But the Iraqi army and allied militias pressed ahead with their offensive — supported by massive US airstrikes. "As IS lost more and more ground, the fighters kept on telling us that they were invincible," Abdulrahman remembers. "Our problem was that IS had complete control over weak people."

Now, one year after the liberation, about 75 families have returned to the rubble. There's deep mistrust on each side. No one will admit to having supported IS, to sympathizing with the extremists. Meanwhile, families who suffered shocking losses are full of rage and looking for someone to blame.

The empty house next door

Omar Mohsin lost his 9-year-old son Khaith. The boy was killed by a sniper's bullet. A little later, an air raid wiped out the entire family of Omar's brother. The house next door is still empty. But the family that used to live there wants to return. "That must never be allowed," demands Omar. His pain is clear. He believes the neighbors supported IS and asks: "What did my children do to them?"

Today, Omar lives with his elderly mother. The fragile woman is in tears. "I swear to God that we never did anything to anyone. What did the children do? They were all like flowers. What was their crime? Why did they have to wipe out my family?"

Visiting the home, Abdulrahman comforts her and promises to do his best to prevent the unwanted neighbors' return. It's reassuring because his word counts. It's the mukhtar who liaises with the authorities. He files status reports for the military, the police and the intelligence service. The system is, of course, open to denunciation and corruption. 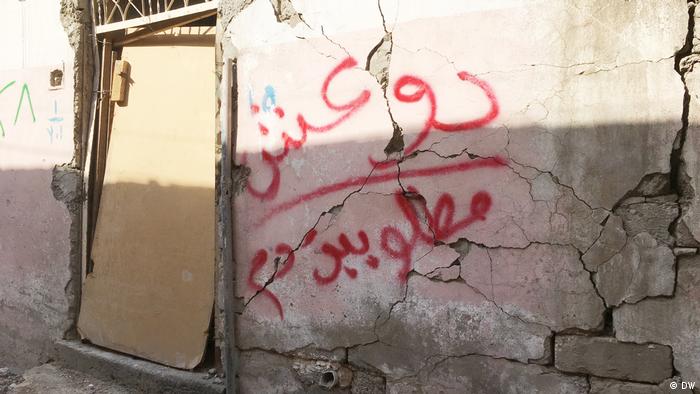 Message on the wall: 'IS - we want your blood'

On average there are about three families each week who want to return to Hamam Manqush. Each is monitored. The aim is to crack down on sleeper cells, former fighters in hiding, and bureaucrats who kept the terror regime's administration running. Some 20 families in Hamam Manqush are currently accused of having collaborated with IS. The knocks on their doors go unanswered.

Abdulrahman answers his cellphone. He gets regular calls from people who plead with him to issue a clean sheet. "For me, the key is that the others will accept your return. Only then can I allow you to come back," he tells the woman at the other end of the line. "But unfortunately, I have to tell you that the others don't want to see you here," he adds. "You had IS members in your family, even if you say otherwise." That's his verdict: no return.

On his tireless forays through the ruined quarter, the energetic mukhtar is accompanied by assistants equipped with walkie-talkies. They keep in touch with the many checkpoints. And they fill in forms for the allocation of water tanks and food rations or for the removal of rubble. But above all, it's about classifying people as victims, perpetrators and fellow travelers. 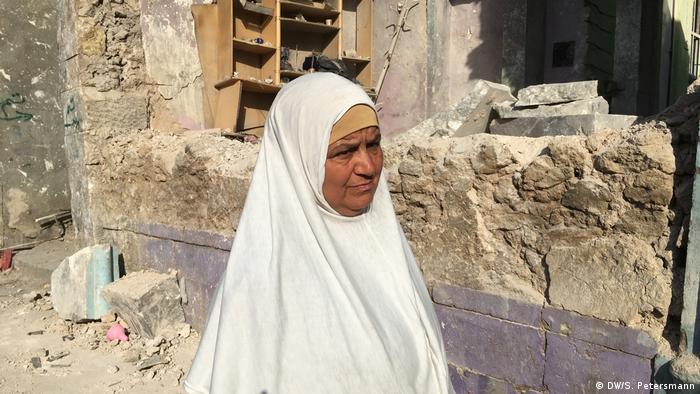 This woman's house is practically a ruin, but she wants to return

Abdulrahman is convinced that there can be no reconciliation with the key perpetrators. But what about the opportunists, the hangers-on? Is it wise to isolate them? "The problem is that people have far too much time to think," the mukhtar replies. "They have nothing to do, they can't find work. We urgently need to create jobs to change people's minds. If you only live in the past, history repeats itself."

Too shocked to cry

Naram Muhamad is a 24-year-old computer science student. She associates plenty of joyful childhood memories with Old Mosul, where her father used to own a grocery shop. She vividly recalls her impressions when she first returned to the devastated cityscape on the western bank of the Tigris: "I fell ill for three days. I was simply too shocked to cry."

Naram and her family live in the part of the city that lies east of the Tigris River. It's an area where, in many quarters, it almost seems as if the war never happened. During IS rule, Naram barely left the house. As a woman, she was barred from attending university. "Those three years have been like a big jail sentence for me," she says. "I read endlessly at home. I tried very hard not to lose touch with the world." 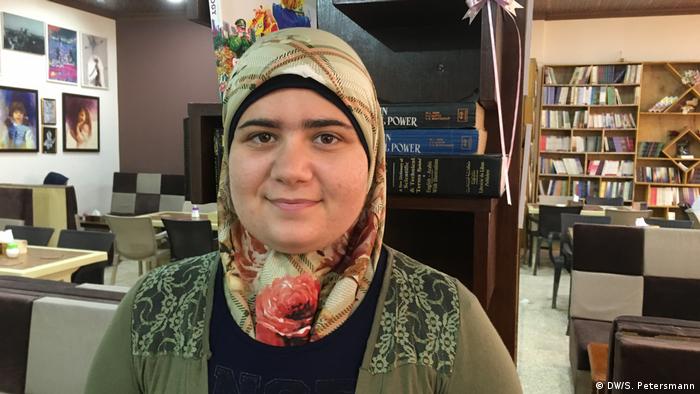 Today, Naram dreams about writing her own books. About life and people. She goes to university every day. The sprawling campus is one of the few war-scarred areas in the eastern half Mosul. Some buildings were damaged badly in US air raids because 'IS' had used them to produce explosives. The central library, once one of the largest in Iraq, was burned down by the jihadis. "Buildings can be rebuilt with money, but we also need to rebuild our minds," says Naram. "That is much more difficult. We need to reach people's souls. We need to learn to think freely."

Naram organizes classes for internally displaced women in refugee camps to educate them about their political rights. She‘s also involved in student politics and regularly visits an alternative book-café in the university quarter that offers readings on social and political issues. Her life is pretty much back to normal. But she's well aware of the many unresolved conflicts, especially those surfacing in the devastated western half of the city of her birth. "Yes, we hurt and killed each other. Yes, we took each other's rights. But now we must learn to talk about it," the young activist insists. Adding that young people like her should take the lead.

One year after the liberation of Mosul, the Iraqi army and Shiite militias are still omnipresent. This was after all the jihadis' capital, like Raqqa in Syria, and the people of the city are eyed with suspicion in other parts of Iraq. 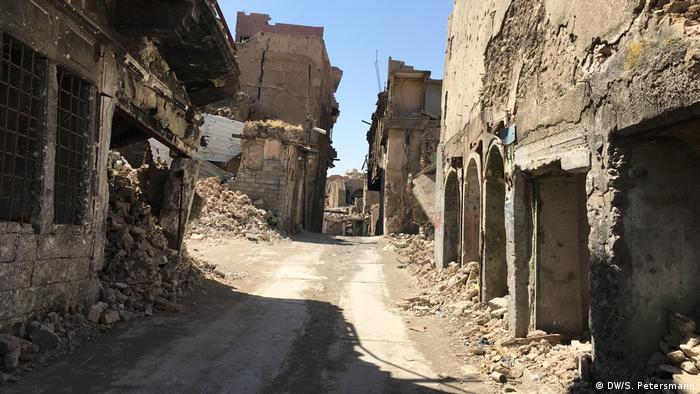 The ruins of Old Mosul tell of a horrific battle

In addition to 40,000 foreign fighters, tens of thousands of local Iraqis joined IS, many from the greater Mosul area. The government's anti-terror tribunals regularly impose death sentences on alleged collaborators, often in summary trials barely lasting half an hour. It's difficult to know exactly how many suspected IS members are currently being held in Iraqi prisons. The government doesn't publish any figures. Quoting government officials, Human Rights Watch last year put the number at over 20,000.

Naram is calling for a national reconciliation plan. "There are different levels of guilt," she says, "and if we now reject all those involved with IS, we will only ensure that there will be a next generation of extremists amongst us." Social acceptance, she‘s convinced, can only be fostered in encounters between victims, fellow travelers and perpetrators: "If we want a future as a nation, we cannot allow society to tear itself apart."