Prime Minister Haidar al-Abadi has urged speedy executions in response to the killing of eight abductees by the "Islamic State." In a first, the Iraqi Justice Ministry released photographs of the hangings. 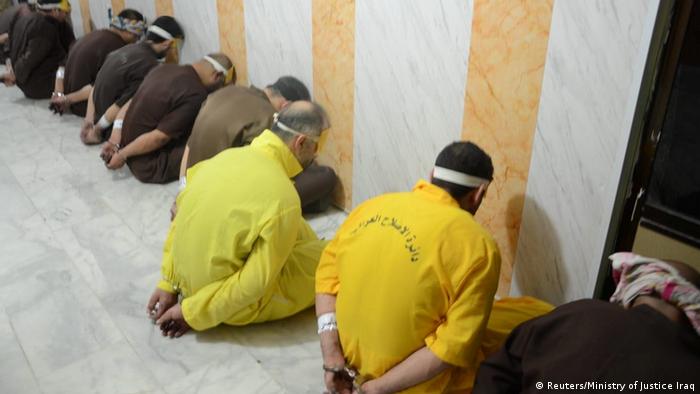 In a first, the ministry released photographs of the executions, including one showing four men hanging from the gallows. The prisoners had exhausted their appeals, the ministry said.

Al-Abadi's order seeking "just retribution" followed the murders of eight policemen and members of a pro-government Shiite militia by IS militants. The eight were believed to have been abducted by the militants earlier this month.

The killings raised fresh questions about Iraq's security situation, even months after the government declared victory over the IS militant group in December.

Al-Abadi is being blamed for ignoring the lingering threat posed by the IS despite its so-called caliphate being dismantled.

"Its so-called 'state' is shattered, but still there are cells that appear and disappear from time to time in the various areas to terrorize citizens," said Sheikh Abdelmahdi al-Karbala'i, a representative of the top cleric, in a Friday sermon broadcast on state TV.

He accused the government of losing sight of the threat posed by the IS as the country's politicians focus on forming coalitions after May elections.

"It is not correct to get distracted with election results and forming alliances or fighting over positions from doing what is necessary to destroy the terrorists and provide protection for citizens in all areas and provinces," he said in the Shiite holy city of Kerbala, from where several of those killed came.

IS has been defeated in all major urban centers it held at the height of its power in 2014 in Syria and Iraq, including Mosul, Iraq's second-largest city. But the group still operates from pockets along the border with Syria and has continued to carry out attacks across Iraq.

"Without the children, I would have killed myself." Kocher, a Yazidi mother from Iraq, survived two years in IS captivity. The atrocities she suffered left her full of rage. Three of her children are still missing. (22.06.2018)

Omar Mohammed, a young historian from the Iraqi city of Mosul, has founded a platform to document the crimes committed by "Islamic State." Has Mosul Eye made a difference? (11.06.2018)