Iraq's military says it has killed several senior IS members in Syria's city of Hajin. The airstrike was part of an ongoing operation approved by the Damascus government and the US-led coalition fighting the militants. 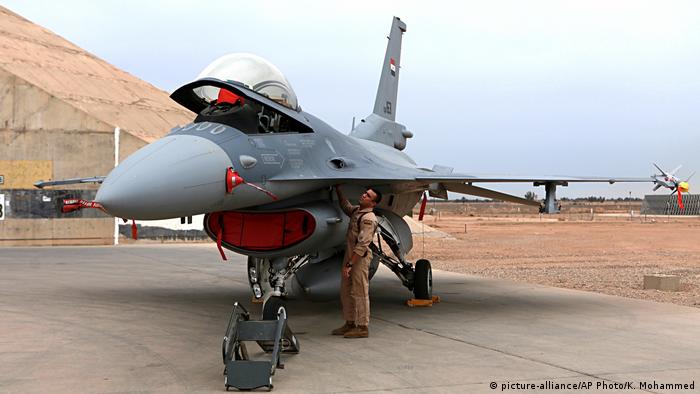 The Iraqi military on Saturday said it had killed 45 Islamic State (IS) jihadists, including a senior member of the group's "ministry of war," his deputy, a local commander and a media official.

Iraqi F-16 fighter jets carried out a "successful strike targeting a meeting of Daesh (IS) leaders" on Friday in the Hajin region, in the eastern Syrian province of Deir Ezzor, the military said in a statement on Saturday.

The attacks have the approval of the Syrian government of President Bashar al-Assad and the US-led coalition that is also fighting the militants.

Iraq's air force has conducted a number of strikes on IS-held territory in Syria since April, including one targeting "the headquarters of IS terrorist gang leaders" in Hajin on May 24.

The most recent operation was the second in less than a month.

IS, which once occupied a third of Iraq's territory, has been largely defeated in the country but still poses a threat along the border with Syria.

Last month the Britain-based Syrian Observatory for Human Rights, which monitors the Syrian war, said that at least 65 senior IS members were living in Hajin.

According to the monitor, Hajin has been surrounded since the end of 2017 by the Syrian Democratic Forces, a US-backed alliance of Kurdish and Arab fighters.